The clock is ticking, because the study results will be thrown off as the chemical blood level in participants decreases over time. 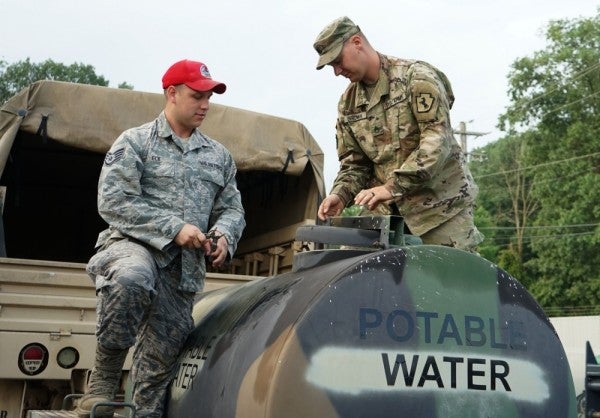 A multimillion dollar federal study on toxic chemicals in drinking water across the country is facing delays due to a dispute within the Trump administration, according to several sources involved in the study or who have knowledge of the process.

The dispute has implications for more than half a dozen communities where drinking water has been heavily contaminated with per- and polyfluoroalkyl substances (PFAS). Concerns about the chemicals have exploded nationally in recent years, following decades of PFAS use in products including non-stick cookware, water-resistant clothing, food packaging, carpets and military firefighting foams. Scientists say significant delays could limit the effectiveness of the study.

The unregulated chemicals are known to exist at some level in the drinking water of tens of millions of Americans, with one estimate placing the number as high as 110 million. The chemicals are also the subject of “Dark Waters,” a film released in November starring actors Mark Ruffalo and Anne Hathaway.

Some prior studies on PFAS have linked the chemicals to health problems, including high cholesterol, reproductive issues and testicular and kidney cancer. Other studies have failed to replicate some of those results, and some PFAS are better researched than others, leaving the exact implications of exposure unknown.

With public concern rising, congressional lawmakers in 2018 appropriated $10 million for a nationwide study to offer more definitive answers about health effects. The money was budgeted for the Department of Defense, which is also facing at least $2 billion in PFAS cleanup liabilities. The money then flowed to the U.S. Centers for Disease Control and Prevention.

This summer, the U.S. Agency for Toxic Substances and Disease Registry, an arm of the CDC, announced that it would use the funds to study highly exposed communities in California, Colorado, Massachusetts, Michigan, New Jersey, New York and Pennsylvania. The design of the study shops out the actual research to academic or government partners in each state and provides grant funding to conduct the work.

But the study is off to a slow start, with a dispute between the CDC and White House Office of Management and Budget playing a role, sources say.

The issue was first referenced publicly on Tuesday by Robert Laumbach, an environmental health researcher at Rutgers University, during a press conference held by U.S. Rep. Frank Pallone, D-New Jersey. Laumbach is the lead investigator for the New Jersey portion of the study, which will focus on PFAS-impacted communities in Gloucester County, near Philadelphia.

“Unfortunately, the study is being held up by the Office of Management and Budget, with no clear timeline for approval,” Laumbach said.

In an interview with USA TODAY Network, Laumbach said he heard from federal partners that the CDC had asked the White House to review a draft design of the national study. Under the federal Paperwork Reduction Act, studies such as the CDC's must go to the Office of Management and Budget for a formal review and cannot be started until approved.

Laumbach said he was told that OMB “didn't pick up the review.” Instead, the White House referenced an ongoing CDC pilot study on PFAS at the Pease International Tradeport in Portsmouth, New Hampshire. According to Laumbach, OMB said that the Pease study should be completed before the review of the national study could begin.

“They sort of sent it back and said, 'We thought you were going to wait for the Pease study,'” Laumbach said.

Laumbach said he understands that the CDC is arguing that the Pease study, which started in October, can be done concurrently with a White House review of the larger national study.

“Whether or not the OMB sort of accepts that reasoning is an open question,” Laumbach said.

Asked about the study, the CDC in an email offered no indication anything is amiss, adding the agency is “in the process of finalizing” the study design so it can be sent to OMB.

“This is a normal process that all federal agencies go through,” the CDC wrote. “We expect to send the protocol to OMB for review in early 2020.”

The CDC said state partners in the national study have already begun some level of work and are developing strategies to recruit participants, collect data and further involve the public.

An OMB spokesperson did not answer questions Tuesday or Wednesday, including direct inquiries about any conflict between the agencies.

Despite the CDC's assurances, other sources familiar with the review process said they are aware of friction.

Linda Birnbaum, who recently retired as director of the National Institute of Environmental Health Sciences, said she heard about delays from former federal colleagues.

“I've heard others speak about frustration, that it's being held up at OMB,” Birnbaum said. “And I know the CDC and (Agency for Toxic Substances and Disease Registry) are pushing back on that.”

Given the study's size — the CDC has said it aims to study 6,000 adults and 2,000 children across the seven states, by looking for unusual correlations between PFAS blood levels and medical issues — an OMB review is required.

But Birnbaum said the review process itself can cause delays even without formal disputes. It also creates a dynamic where only a few on-staff scientists at the White House are tasked with reviewing a study developed by numerous counterparts in other agencies. In this case, the draft study was also already peer-reviewed by a trio of independent scientists.

“I've always found it problematic,” Birnbaum said of the White House review process. “Things in general always take a long time if you have to take it to OMB, because they don't have the staff.”

Ticking away in the background is the fact that the most well-known PFAS chemicals decrease in human blood by half every three to five years. With many impacted communities having stopped or curbed drinking water exposure by 2017, would-be study participants may already have less than half of the blood levels they did when exposure was first discovered. But without research to better identify safe levels in the blood, scientists don't know what any decreases would mean.

Kyle Steenland, an Emory University professor who served as an epidemiologist in a landmark PFAS health study in West Virginia, says there are some scientific techniques that can “reconstruct” past exposures and blood levels. But he says it's still an exercise in estimation, and getting actual data more quickly can only help.

“It's an iffy product if you don't have good data,” Steenland said. “I'd be a little concerned if it drags on and on.”

Laumbach said his understanding is that an OMB review can take a year or more, a timeline that Birnbaum also said is possible.

The original funding of the PFAS health study was hailed as a bipartisan victory in Congress. Key senators this week offered continuing support. Sen. Pat Toomey, R-Pennsylvania, “has reached out to OMB regarding this matter,” his office said.

Sens. Tom Carper, D-Delaware, and Bob Casey, D-Pennsylvania, said communities that face PFAS contamination deserve to know the results of the study as soon as possible.

“In this administration, OMB has consistently been the quicksand into which all rules designed to protect health and the environment sink,” Carper said. “This executive branch agency moves with the utmost haste when it comes to deregulation, but when it comes to basic protections for public health, time and again, OMB creates a standstill.”

Those familiar with the process say an OMB review already led to some delay for the Pease pilot study. Meeting minutes from the CDC show researchers originally hoped to start the project last summer but were unsure how quickly OMB would move.

An official in February offered a conservative estimate that blood draws would begin in August. But the project wasn't approved by OMB until that month, and the CDC didn't begin recruiting study participants until October.

“There definitely have been delays in the OMB process,” said Mindi Messmer, a former New Hampshire state representative. “We're happy that it's getting started.”

Other states are now waiting for the start of the larger federal study. Spokesman Nate Wardle said the Pennsylvania Department of Health is “awaiting additional guidance and information from the CDC” to get started but has begun other aspects of planning.

It is typical for a review to take time, said Betsy Southerland, a former director of science in the EPA's Office of Water who worked on PFAS prior to leaving the agency in 2017, but she criticized the budget office for not prioritizing PFAS.

“It seems like these kinds of studies should get really expedited reviews because of the concerns these communities have,” Southerland said.

Southerland also said the OMB process can serve as a “black box,” where other federal agencies are able to exert influence away from the public eye. Emails obtained by the nonprofit Union of Concerned Scientists last year showed the White House previously communicated with the Department of Defense and EPA in an apparent effort to curb the findings of a prior CDC study on PFAS.

“The question would be, is it just basically a bureaucratic delay,” Southerland said. “Or is one of those agencies, such as DOD, feeling like these kinds of studies unmask … issues that they don't want unmasked?”