President Donald Trump has been sued again over his plan to ban transgender Americans from serving in the military, setting... 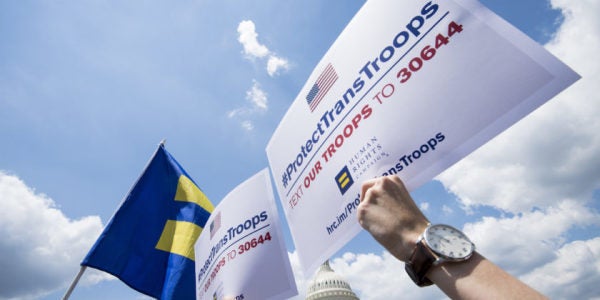 President Donald Trump has been sued again over his plan to ban transgender Americans from serving in the military, setting the stage for another bruising court battle over a directive from the White House.

Trump has inflamed U.S. cultural wars since his election victory, pushing back on his predecessor’s liberal polices and pleasing his conservative base. His executive orders have targeted immigration, while his Justice Department started a review of affirmative action in colleges and joined a suit to halt the spread of gay rights in the workplace. The president’s policy proposals have also hinted at fights over abortion and doctor-assisted suicide.

The ACLU is the same national organization that helped stall Trump’s proposed ban against travelers from several Muslim countries, a narrowed version of which took effect in June pending a U.S. Supreme Court hearing in October.

The Department of Defense concluded in 2016 that there was no basis for the military to exclude transgender men and women from serving openly, subject to the same fitness requirements as other Americans, the ACLU said. New transgender recruits were due to be permitted to enlist on July 1, it said.

Thousands of transgender Americans now serve in the armed forces, putting themselves in harm’s way to protect the rights and freedoms in the U.S., the ACLU said in the complaint.

“Some perform critical roles in intelligence analysis, disaster relief, medical care, and pre-deployment training at bases in the United States,” the organization said. “Others have deployed to combat zones in Iraq and Afghanistan.”

Five members of the armed forces earlier this month sued Trump and his top military brass seeking to halt the reversal of the transgender policy put in place by the Obama administration. The new suit by the ACLU adds significant resources to the fight as the organization has seen its membership swell since Trump’s election.

The service members in the earlier case, who are suing anonymously, say they disclosed their gender orientation relying on the existing policy that permits them to serve openly.

Treatment of transgender people has become a flash point as social conservatives lead fights in some states to require students and sometimes adults to use schools and public restrooms corresponding to their gender at birth.

In a three-part Tweet, Trump outlined his reasoning for reversing the Obama transgender policy. “After consultation with my Generals and military experts, please be advised that the United States Government will not accept or allow Transgender individuals to serve in any capacity in the U.S. Military. Our military must be focused on the decisive and overwhelming victory and cannot be burdened with the tremendous medical costs and disruption that transgender in the military would entail. Thank you.”

The ACLU included screen shots of the tweets in the complaint, saying they were were a “purely political” attempt to accommodate the most conservative legislators who support the president.

“The Trump administration has provided no evidence that this pronouncement wasbased on any analysis of the actual cost and disruption allegedly caused by allowing men and women who are transgender to serve openly,” according to the complaint.

The Military Times pointed out that the cost of providing Viagra and sexual dysfunction medications to members of the armed forces is 10 times the costs associated with health-care services for transgender troops.