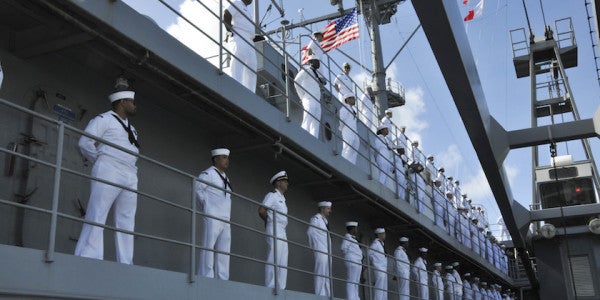 Those hoping for a Hail-Mary reprieve to the Navy's decision to ditch its historic ratings system in favor of new job codes got a dose of disappointment this week.

In response to a WhiteHouse.gov petition asking for the decision to be reversed, an executive branch official wrote in a Tuesday post that the petition was here to stay and praised the Navy for a move that was set to improve sailors' job prospects as they transitioned to civilian life.

The petition was created Sept. 29 and reached its goal of 100,000 signatures Oct. 28, just inside the 30-day timeline. According to the rules for White House online petitions, this guaranteed a direct response from a White House official, though it does not mean that the request in the petition will be granted.

In the brief 243-word unsigned response, an official acknowledged the angst felt by many who stood to lose beloved job titles like corpsman or boatswain's mate in the overhaul.

“Organizational changes that require a cultural shift can cause friction during transition periods, but the President has confidence in the decisions made by U.S. Navy leaders and agrees that the benefits in future years will outweigh growing pains in the next several months,” the official wrote.

“Whether one's Navy career occurred under the former rating structure or today's modernized system, the President maintains his steadfast pride in Sailors who have sacrificed and worked hard to serve with distinction,” the official added.

The change would make the Navy's job classification system similar to that used by the other armed services and would create increased flexibility in assignments and training while more closely aligning Navy jobs with civilian equivalents, according to the statement.

These are the chief selling points promoted by Vice Adm. Robert Burke, chief of naval personnel, who has been promoting the radical plan, most recently with a trip to the Middle East that allowed him to conduct town hall-style meetings with some 9,000 sailors stationed in the region.

On Oct. 31, Burke told Military.com in a phone interview from the carrier Dwight D. Eisenhower in the Middle East that he was aware of the online petition and the pending response from the White House, but did not expect an order to change course.

“The White House, I'm confident they'll consult Navy leadership, including the secretary of the Navy, on how to respond to that petition, just like they do to the multiple petitions they get all the time,” he said. “So I'm continuing down the path that was set out.”

The author of the petition, however, has not given up hope.

Robert D. Weeks, a former Navy operations specialist who said he treasured his rating as part of his military identity, told Military.com Wednesday that he would like to re-file the petition sometime after the new year.

“It was the response I expected,” he said. “The consensus in my Operations Specialist Facebook group is to wait until a new president and [Secretary of the Navy] are in office and bring it up again.”

There are many unknowns, however.

The online petition process was created during the Obama administration and it remains to be seen if President-elect Donald Trump will continue the practice. And while Trump's nominee for Navy secretary is widely rumored to be outdoing congressman and House Armed Services Committee member Randy Forbes of Virginia, that nomination has yet to be made official. Forbes has not weighed in on the Navy's new job classification system.