The 2017 attack in New York was intended to be the first of a series of race-based attacks, according to authorities 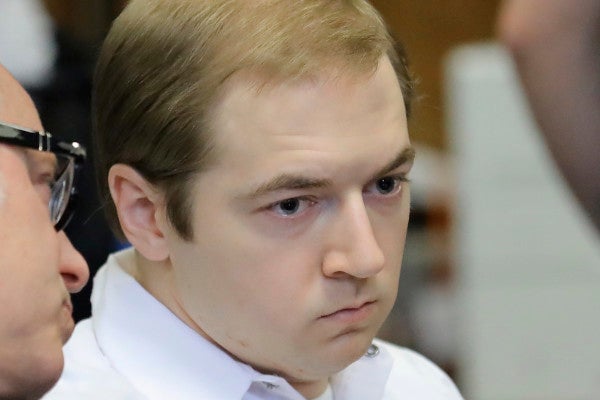 White supremacist James Jackson – accused of trying to start a race war by killing a homeless black man in Times Square with a sword — pleaded guilty Wednesday to murder as an act of terrorism.

Jackson, 30, a white man from Maryland, admitted to violently slashing 66-year-old Timothy Caughman in March 2017 in what he intended to be the first of a series of race-based attacks, according to authorities.

He now faces life in prison without parole at his sentencing on Feb. 13. He pleaded guilty to all six counts in Manhattan Supreme Court, including murder and a hate-crime charge.

Jackson said “that's true” when Judge Laura Ward asked him if he'd been armed with a sword and two knives when he began stalking black men in Midtown to find his first victim.

Caughman, who was collecting bottles for recycling, caught Jackson's eye in Times Square on March 20, 2017. Jackson attacked him from behind with a sword — sending Caughman, bleeding and staggering, to the nearest police station.

His killer confessed— in chilling detail — to cops in October, and his guilty plea came after Ward said jurors would get to hear all of it if the case went to trial. Jackson's attorneys said he pleaded guilty against their advice.

Cy Vance Jr., the Manhattan district attorney, personally appeared alongside the trial prosecutors — who were prepared to go to trial if the guilty plea didn't materialize.

“White nationalism will not be normalized in New York,” Vance told reporters after the proceeding. “If you come here to kill New Yorkers in the name of white nationalism, you will be investigated, prosecuted and incapacitated like the terrorist that you are.”

Jackson showed no emotion during the proceeding and admitted without hesitation that his goal was to massacre “the African-American community in the United States and beyond.”

“Is it true that you stabbed [Caughman] in part or whole because he was an African-American man?” Ward asked.

“That is true,” he said in a soft voice.

The Baltimore native, who served in the U.S. Army, told the Daily News in a 2017 jailhouse interview that he killed Caughman as part of a mission to deter interracial relationships.

He would rather have killed “a young thug” or “a successful older black man with blondes … people you see in Midtown. These younger guys that put white girls on the wrong path,” he said at the time.

Friends of Caughman, who remember him as a gentle man and good neighbor, also filled the courtroom to witness Jackson's fate.

“I am grateful that he pleaded guilty to all the charges so then that way they can just take him back and throw the key away … I do not forgive you for what you did to my friend,” Portia Clark, 66, said.

One of Jackson's attorneys, Frederick Sosinsky, told the judge Wednesday that New York police improperly interviewed Jackson several weeks ago without notifying his defense lawyers. He said the officers who conducted the interview were not been assigned to the case and work in the intelligence division of the police department.

Sosinsky called the interview “shocking to the conscience” and in violation of state and federal law.

“This will not be the end of the matter as far as I'm concerned,” Sosinsky told Judge Ward. “I will not rest until we have a very good answer as to how this could possibly happen.”

Vance said he was unaware of the interview before Wednesday but told Ward “it's not something we'd countenance.”

WATCH NEXT: The Recruitment of Veterans By White Supremacy Groups Is On The Rise