There are over 3,000 reported cases of infection in South Korea. 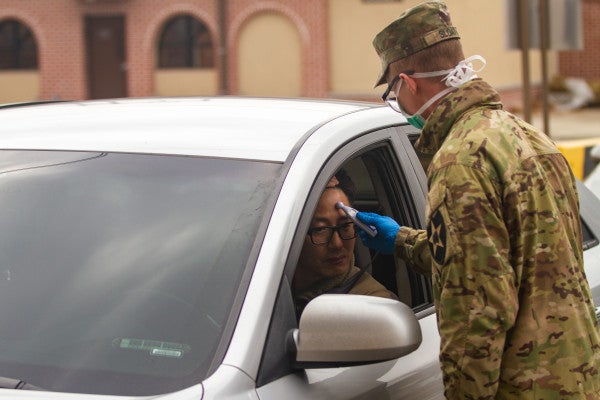 Health officials have been working to determine whether or not anyone else was exposed to the coronavirus after a 23-year-old US soldier stationed in South Korea tested positive earlier this week, when he became the first member of the US military to test positive for the virus.

The infected soldier's wife and their baby have been moved to an isolation unit at a US military hospital in Daegu. Wearing protective gear, USFK commander Gen. Robert Abrams and his wife, Connie, visited the family at the hospital Saturday.

A 61-year-old widowed US military dependent was the first case and prompted USFK to raise the risk level to “high” for the entire Korean Peninsula. A USFK employee, a Korean national at Camp Caroll, has also tested positive, according to USFK.

Just left our hospital where I visited with our soldier with #COVID-19, and @ConnieAbrams visited his wife (positive test this morning) and baby who just arrived from Daegu. Soldier doing well, asymptomatic today and will be tested again later. pic.twitter.com/NqqqxwK26N

South Korea has the highest number of infections outside of China, where the coronavirus, also known as COVID-19, originated.

As of Saturday, the number of infections had jumped to 3,150, Reuters reported, citing the Korea Centers for Disease Control and Prevention.

In response to the outbreak, USFK has placed a number of restrictions on US military personnel. For example, all personnel are, without approval, forbidden from “attending non-essential off-installation activities and social events,” including dining out, shopping, hitting bars or clubs, and going to the movies, USFK said in a recent update.

US Indo-Pacific Command said in a statement Friday that all non-essential Department of Defense travel to South Korea is prohibited as “the number of reported cases of novel coronavirus (COVID-19) continues to rise.”