A wingsuit is a remarkably simple invention that allows the wearer to soar through the air like a flying squirrel,... 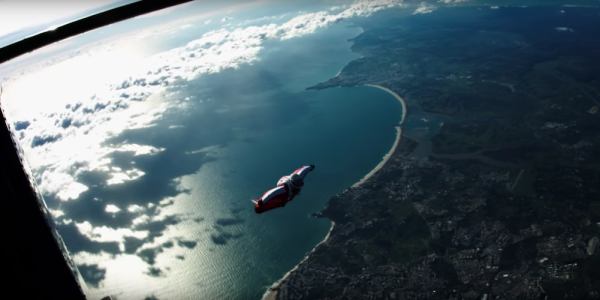 A wingsuit is a remarkably simple invention that allows the wearer to soar through the air like a flying squirrel, arms and legs outstretched, floating on a pillowy cushion of his own sheer insanity. Of the many ways human beings have devised to get themselves killed, it’s one of the most awe-inspiring and effective. During 2016, the deadliest year ever for wingsuiters, there were more than 30 fatalities. That number is due mostly to the sport’s popularity. As former Navy fighter pilot and BASE jumping aficionado Richard Webb told National Geographic, “Right now, wingsuit BASE jumping is, globally, the hottest thing going for the impressionable, 18- to 35-year-old single-male demographic.”

No wonder, since it’s cool as fuck.

Fraser Corsan is one of the most experienced wingsuiters in the world. According to the project’s website, the combined distance of his 1,300 jumps would get you from New York to Mumbai.

Now, in an effort to raise £1 million for the British veterans’ charity SSAFA, Corsan has set a big challenge for himself, breaking the records for highest altitude (37,265 feet), longest jump (9:06 minutes), furthest distance (19 miles) and fastest speed (234 mph) . . . in just two jumps. Check it out.

And here’s a nice compilation video of wingsuiters doing what they call “proximity flying” which is basically just flying absurdly close to trees, rocks and other hazards. Real dumb!

As New Scientist points out, in order to break the record for height, Corsan will have to leap from a plane flying higher than most commercial flights into air that’s less than 60 below. We wish him the best of luck. He’s batshit crazy but at least it’s for for a good cause.

You can donate to UK veterans on his behalf here.