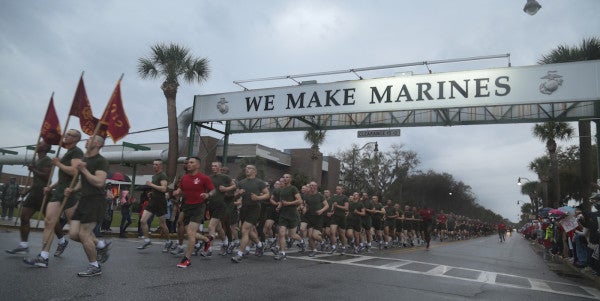 A recruit at Marine Corps Recruit Depot Parris Island in South Carolina who was hospitalized after a fall last week was witnessed intentionally jumping from a building, a source with knowledge of the incident told Military.com.

Officials have released little information about the recruit and the circumstances of the incident, declining to disclose even where he was taken for medical care.

But a source confirmed to Military.com this week that the recruit had jumped from the receiving building, a brick structure that is a first stop for recruits arriving at the depot.

The recruit had made his way to the roof, a process that requires finding a way to a small ladder access point from the top floor of the building.

“It's not a matter of just climbing a stairwell and opening a door,” the source said. “It's not readily available to just access the roof.”

The incident took place in the late afternoon of July 26. Several witnesses actually saw the recruit jump and appear to land on his head.

Multiple sources have told Military.com he was airlifted out following the jump, likely to a trauma center in Savannah, Georgia.

The recruit had arrived at the depot July 25, just one day before the incident, officials said.

The new information indicates that this recruit is the third since 2016 to jump from a building at Parris Island in what appear to be suicide attempts.

Last October, Kristian Gashaj, a 19-year-old recruit from Michigan, was hospitalized after reportedly jumping from the second floor of a building at Parris Island, just four days after arriving at the base for training.

And in March 2016, 20-year-old Raheel Siddiqui, also from Michigan, reportedly jumped to his death from the third floor of a barracks building after beginning training with Parris Island's 3rd Recruit Training Battalion.

Flores said no criminal investigation has been ordered into the most recent incident, but said the command is investigating the circumstances of the recruit's injury.