Moments before 18 women were about to walk across Inouye Field at Fort Benning to become brand new privates and... 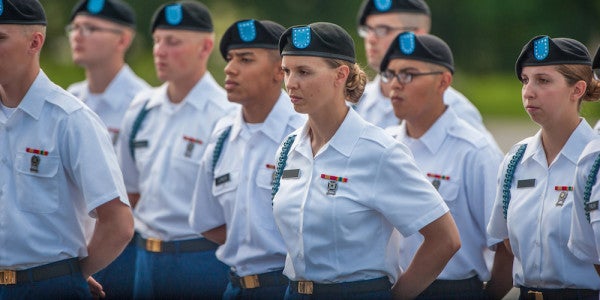 Moments before 18 women were about to walk across Inouye Field at Fort Benning to become brand new privates and specialists, a female drill sergeant offered clarity.

“This is a big deal,” she said to the younger women Friday morning on the grounds of the National Infantry Museum and Soldier Center. “You are making f—ing history.”

It was the kind of clarity that only a drill sergeant can provide.

The four women were among 18 who graduated from One Station Unit Training as the first women to take the enlisted route to become infantrymen.

It was another in a string of historic Army gender-integration events that have played out at the Maneuver Center of Excellence over the last four years. Friday was part of the third and final phase.

Though Friday’s graduates are the first enlisted women to complete infantry-specific basic training, they are part of a much broader initiative that started in 2013 when the Army made the formal move to integrate women into previously closed military occupational specialties.

The women will be moving to assignments at either Fort Hood, Texas, or Fort Bragg, N.C. They will be going to units where there will be women in positions of responsibility at platoon, company and battalion level, Army officials have said. Some will remain at Fort Benning to complete Airborne School before moving to a unit.

During Friday’s graduation ceremony, there was no official mention of the historic event and media coverage was limited to two outlets, The New York Times and Columbus Ledger-Enquirer. The only time gender was mentioned during the ceremony was when various speakers referred to the new soldiers as “infrantrymen” and 1st Battalion, 19th Infantry Regiment commander Lt. Col. Sam Edwards referred to the Infantry in its historic context as “Queen of Battle.”

The colonel, charged with overseeing the basic training at Fort Benning, said the women earned the blue cords and the right to call themselves infantrymen.

“It is not soccer camp. Everybody doesn’t get a trophy here,” said Col. Kelly Kendrick, 198th Infantry Brigade commanding officer. “It’s very demanding. And we only give this to those who earn it. We don’t give this away — man or woman.”

There were 48 women trainees who arrived at Fort Benning in February, and 32 of them were deemed ready to attempt basic training without any additional physical training. The 18 graduates were among those 32 soldiers.

There were 148 men who started the class, and 119 of them graduated.

The integrated training of men and women soldiers has played out at the Maneuver Center of Excellence in a public way since early 2015 when 19 women became the first soldiers to attend Ranger School, the Army’s most demanding combat arms training. Capt. Kristen Griest, then assigned to military police, and Capt. Shaye Haver, an Apache helicopter pilot, became the first women to earn the Ranger tab in August 2015. Maj. Lisa Jaster completed the training two months later.

A year ago, the first women to attended the basic officer leadership courses reported to Fort Benning to begin the integration of the officer ranks in Armor and Infantry. In October 2016, 10 women graduated the Infantry Basic Officer Leadership Course, the in December 2016, another 10 women graduated the Armor Basic Officer Leadership Course, becoming first lieutenants.

“We started with leaders first,” Kendrick said. “We have female company commanders out in the formation now. We have graduated lieutenants, I saw some of them out there this morning. We have produced four NCOs who have changed their MOS that have proceeded the privates. So, what you have here is the last step in producing soldiers that will be part of those formations … for integration here.”

Unlike the open media process during much of Ranger School, Maneuver Center of Excellence officials only allowed limited access over the last three weeks of the 14-week training. Reporters agreed to embargo coverage until the class graduated on Friday.

None of the privates, men or women, were allowed to speak on the record, though five recent graduates, including two women, spoke to reporters from the Ledger-Enquirer and The New York Times on Thursday.

The reason for enlisting was summed up by one woman, who was previously a college athlete.

“I am like anybody else, I want to make my hometown proud,” she said. “I like being a part of a team. What better team to be a part of than the Army.”

Both women made available to the media said they had followed gender integration over the last two years and were aware of the first three women to earn Ranger tabs. One of the two women said she was planning to attempt Ranger School in the future.

“They were heroes for me,” one of the women said.

The other was more succinct.

It is important that these new soldiers be able to report to their units without appearing to seek media attention, Fuhr said.

“These soldiers want to be treated as soldiers,” Fuhr said. “They are not seeking special attention. They are at Fort Benning to train just like any other soldier. Their accomplishments are no different than their classmates who also meet the standards and graduate. They want to train, head out to their units and contribute to the mission.”

And the training was demanding, said Kendrick.

“In 14 weeks, we have the highest physical demands of any MOS they have to meet in the Army in the shortest length of time,” Kendrick said. “Our mission was to execute gender integration.”

One of those charged with the execution was Capt. Seth Davis, Alpha Company, 19th Infantry Regiment commander. He had his orders and he was carrying them out during field training exercises on the far northeast corner of Fort Benning earlier this month.

The changing face of the Army

That is the approach that many of those instructors — from Ranger School to the Basic Officer Leadership Courses for infantry and armor — have had over the last two years as this training has played out at Fort Benning.

To integrate the ranks, Fort Benning had to first integrate the drill sergeants, the first taste of the Army for most of the civilians turned trainees. One of those pioneers was Sgt. 1st Class Karen Carter, senior drill sergeant for the 1st Platoon, Alpha Company.

“At first, I was kind of surprised to get orders for drill and coming here,” Carter said. “The first couple of months, it has been one of the best decisions. I feel like we are the face of the Army. We are the first ones they see when they come into the military. Just being here is an honor and it enhances my leadership skills.”

One of the male soldiers who spoke to the media said having female drill sergeants was not a big deal.

“My mother is a strong woman and I have taken a lot of orders from her over the years,” the soldier said.

Two years ago, Ranger instructors spoke of the historic nature of the gender integration of the Army’s most difficult combat leadership school. There is also a historic feel to this basic training class, Carter said.

“I feel like it’s a big deal, but it’s nothing out of the ordinary,” she said. “It’s still training. … It’s just historic because we are here. But it’s the same standards.”

That is coming down from the top. Maj. Gen. Jeffrey Snow, commander of Army Recruiting Command at Fort Knox, who is not surprised that the number of women completing these initial integrated courses is small.

“We never anticipated to see a significant influx into the combat arms,” Snow said. “The research indicated that the majority of the women will still go into non-combat positions. But what it did do for us — and believe this in my heart of hearts — it caused women to look at the Army in a different light and say, ‘Hmm, it’s now a level playing field.’ So even though they didn’t go into combat arms, we had a good year in 2016. We had 14,000 women make the decision to join the regular Army and Army Reserves. That was the best year in 10 years from a percentage perspective, and I think we are on track to do the same thing this year.”

Women failing to meet the standard than men by percentage is not surprising, said Kendrick, who offered an explanation.

“Most of female trainees are on the lower scale of height and weight — 5-foot-3, 5-foot-4, 5-foot-2, 5-foot, 120 pounds, 100 pounds — our physical requirements are not altered for any percentage of body weight,” Kendrick said. “They carry the same load as everybody else. What we find is when you have a smaller, skinnier person — frail, I guess would be a word — those physical requirements are very difficult.”

Currently, there are about 100 women either training or in the pipeline to do infantry basic training at Fort Benning, Snow said. The publicity generated from the first class to graduate should help increase that number, Snow said.

As news of the first class of women to graduate infantry basic training spreads, Snow said it should help the Army recruit quality women who want the challenge.

“I think the potential is there,” Snow said. “When that word gets out there, I think that will resonate with the women of today.”

Snow said there is no quota of women that he are his Army recruiters must meet.

“I have not been given a quota,” Snow said. “And I think that’s the right answer because I don’t ever want to put my recruiters in a position where they are trying to compel anyone to do something for which they have not volunteered to do.”

The fact that 18 of 48 women made the cut to infantrymen in the initial class speaks to the maintaining of standards, Snow said.

“I would have liked it to be a little higher, but the reality is if it means only 18 women were able to complete the course, consistent with the standard, then I think it’s the right number,” Snow said. “The Army and the leadership has been very clear that we are not going to lower standards.”