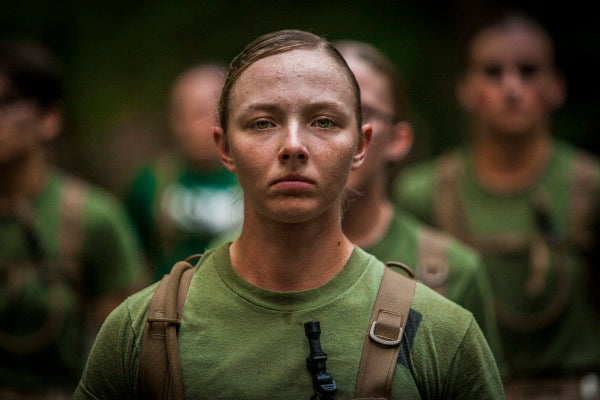 More women are joining the U.S. military but the individual services must do more to continue the trend and ensure they stay in uniform, according to the Government Accountability Office.

The share of women in the armed forces grew from 15.1% in 2004 to 16.5% in 2018, with the Navy seeing the largest increase over 15 years. The Air Force consistently has had the highest percentage of women serving — nearly a fifth of the entire service — since 2004, while the Army and Marine Corps are at or below the total force percentage.

But given that women make up half the potential recruit pool and coupled with data that shows women leave the service at higher rates than men, GAO analysts said work needs to be done to address the continuing gaps between the genders in uniform.

“Without Department of Defense guidance and service plans with goals, performance measures and time frames to monitor female recruitment and retention efforts, DoD may continue to miss opportunities to recruit and retain a valuable segment for its active-duty force,” according to a report released Tuesday by the GAO.

Concerned over recruitment and retention of female service members, Congress in 2018 asked the GAO to determine how the services compare in recruiting, retaining and promoting women.

Analysts found that the likelihood of women separating from the armed forces is 28% higher than men, and female enlisted promotion rates lagged behind men across the board.

The report authors noted that, in a review of existing research on military separations, female veterans “mentioned both the occurrence of a sexual assault and how it was handled by the military as contributing to their separation.”

“For example,” they wrote, “two females stated that the perpetrator was not punished, and another woman cited the lack of support from other service members as contributing to their decisions to separate from the military.”

The report comes as the Army and Marine Corps step up efforts to recruit more women. Marine Commandant Gen. David Berger announced in February plans to place more women in charge of infantry battalions, as well as a review of retention-related policies, such as maternity leave and parental leave.

The Marine Corps historically has had the lowest percentage of women serving. Of the services, however, it retains women at rates second only to the Air Force.

The percentage of women serving in the Army actually declined slightly over the 15-year span studied by the GAO, from 15.3% in 2004 to 15.1% in 2018 — the only service to see a decline. The Army also had the highest separation rate among the services.

The Air Force consistently has attracted and retained women at higher rates than the other services. In 2018, 20.2% of the service was female. The service also had the lowest likelihood of women leaving the service.

The services' top personnel officers testified last December on the importance of diversity in the U.S. military, including efforts to expand recruitment of women and increase efforts to retain them.

“We want our Army to look like our nation and to reflect what's best of our citizens. As the country becomes more diverse, so has the Army,” Army Deputy Chief of Staff Lt. Gen. Thomas Seamands said.

“Diversity remains critical to the Marine Corps. It is our responsibility to ensure the Marine Corps is comprised of the best and brightest from every segment of our diverse society,” Deputy Commandant for Manpower and Reserve Affairs Lt. Gen. Michael Rocco said.

Despite identifying female recruitment and retention as a priority, however, the services have failed to develop plans that include goals, performance measures and time frames to guide their efforts, the GAO found.

It recommended that the DoD, which is updating its diversity strategic plan, include recruitment and retention goals. It made the same recommendations for each of the services.

“Goals are not quotas and can help guide continued improvement,” the GAO wrote.

In their responses, the DoD, Army, Navy, Marine Corps and Air Force agreed with the GAO recommendations.