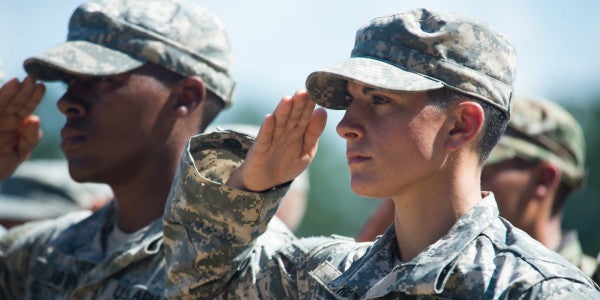 The House Armed Services Committee on Wednesday approved by a narrow margin an amendment to a defense bill to require women to register for the draft.

Rep. Duncan Hunter, a Republican from California, proposed the amendment to lift the restriction on women registering for the selective service at a committee-wide markup session of the proposed fiscal 2017 National Defense Authorization Act.

“Here is why I think this is important; it doesn't matter in this debate whether you think women should be in the infantry or be in special operations,” Hunter said during the session on Wednesday night. “I personally don't. If we had that vote in committee today I would vote against women being in infantry and special operations.

“But this is not about women serving in the infantry. The administration has made that decision unilaterally disregarding what the Marine Corps and special operations communities have said. But that's not what this is about. Right now the draft is sexist. Right now the draft only drafts young men. Women are excluded.”

Hunter went on to explain that his generation has not seen the kind of warfare that requires a draft.

Hunter, who requested a roll-call vote on the measure, ended up voting against his own amendment. The amendment passed 32 votes to 30 votes, with strong support from female committee members.

The proposal prompted several lawmakers to weigh in on the issue.

Committee Chairman Mac Thornberry, a Republican from Texas, made a point in saying the president will not decide on the selective service.

“The only ones who can decide this are us because it is in law or the courts, and there is a court case that is ongoing through the process that challenges selective service being male-only,” he said.

“We have a study that requires the defense department to come back to us about the selective service system about what the benefits are, about what the alternatives may be so that we have a fuller picture of the draft and what it would mean to keep it or to do away with it or to include females in it,” he added.

Thornberry said he wanted to wait for the study, follow the court case, and explore all the issues.

Rep. Jackie Speier, a Democrat from California, thanked Hunter for proposing the amendment.

Rep. Christopher Gibson, a New York Republican who has been on four combat deployments, said he welcomed the discussion on the draft.

Gibson challenged Hunter on his statements that the purpose of the draft is to assign virtually anyone to a direct-action combat unit.

“If we need hundreds of thousands of folks to serve that hasn't changed any reality that we are going to be standards-based as to who is going to be in the infantry and who might be supporting,” he said.

“I think what you … might be suggesting is that somehow we are going to draft individuals, whether they be female or male, and we are going to put them into a situation where they can't perform,” Gibson said.

Rep. Martha McSally, a Republican from Arizona, said she thinks this is an important discussion, “but I do want to correct my colleague from California, as you painted the picture of the only reason for the draft to go into front-line combat — that is not true,” she said. “We all know many people that were drafted in World War II, Korea, Vietnam who served in other positions and not the infantry.”

Plenty of jobs in the military may need filling if a draft is put into action, McSally said.

“There could be medical positions; we could need cyber warriors,” she said. “There is all sorts of positions that we would need the country ready to mobilize for, so I do think we need to make sure that people understand as we are discussing this, the intent of the draft is not to fill 100 percent of the positions with front-line infantry.”