A New Proposal Could Require Women To Register For The Draft

A congressionally mandated commission is weighing whether women should be required to register for the Selective Service System, or whether the U.S. needs a draft registration system at all 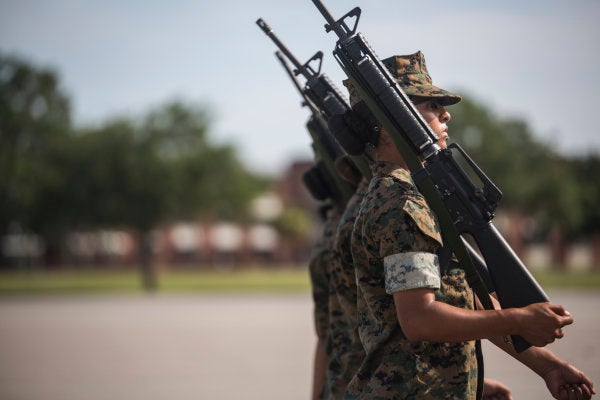 A congressionally mandated commission is weighing whether women should be required to register for the Selective Service System, or whether the U.S. needs a draft registration system at all.

The National Commission on Military, National and Public Service, created in 2016, spent the past year reviewing public service options in the U.S., including the armed forces, AmeriCorps, the Peace Corps, federal employment and more.

Members released an interim report Wednesday that offers some radical proposals for the Selective Service System, which requires all 18-year-old men to register for a potential draft.

Among the options under consideration is whether women should be required to register, if the Selective Service System could be used to find candidates to fill critical military billets, or whether the system should be scrapped entirely.

The commission is not ready to make recommendations, said panel chairman Joe Heck, a former Republican congressman from Nevada and retired ArmyReserve brigadier general. Instead, its members are continuing to collect information for the final report, due to Congress and the White House by March 2020.

“We want to hear from the American public. What I can tell you, though, as we've gone around the country, people have an opinion ,” Heck said. “There aren't that many people sitting on the fence. … They either say it's a matter of equality, or they shouldn't because women hold a special place in U.S. society.”

Panel members said that, in visiting 24 sites around the country, they found alarming misunderstandings of military and public service among students as well as shortfalls in civic education — knowledge they say is essential to raising interest in public service.

According to the panel, young people who receive quality civics education are four times more likely to engage in public service, but education is sorely lacking. One survey said just 26 percent of Americans can name all three branches of government.

“Civic education is front and center to this,” said co-chairman Mark Gearan, who served as director of the Peace Corps during the Clinton administration. Hence, the committee also will make recommendations on how the nation can “reinvigorate civic education.”

The most controversial options the commission is weighing, however, are changes to Selective Service and whether universal service — either military, volunteer national or public service — should be mandatory.

Members said a mandatory service proposal is unlikely. Heck said that commission members have found that young people “overwhelmingly want to serve, they just don't want to be told to do it.”

“We are considering ways which the U.S. could offer universal service opportunities to young people,” he said.

But regarding the Selective Service, all options are on the table. Under current law, all men ages 18 to 25 are required to register for Selective Service, a database for the country to draw on in the event of a national emergency requiring a draft. The system dates to 1917 and, while military conscription was abolished in 1973, more than 90 percent of all eligible men are enrolled in the system.

According to Heck, since the intent of the draft was to help backfill combat jobs in the event of a large war, only men were required to register. With the opening of all combat jobs in the past several years to women, however, it made sense to revisit the laws that govern Selective Service.

“Generation Z represents a huge potential for this country, if we can find ways to encourage a greater number of them to serve,” he said.

Heck encouraged the public to send comments to the panel and read the interim report via the commission's website.

SEE ALSO: Women Are Already In Combat, So Stop Saying They Shouldn't Be In Combat Units