Lt. Stephanie Treece worked as a certified Navy nuclear engineer, and became one of the first women aboard the USS Florida, a nuclear powered guided missile submarine. 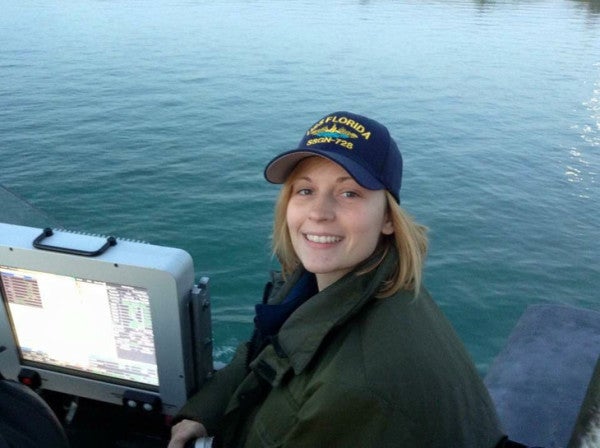 The Penn State freshman aerospace engineering major had the chance to ride in a submarine, at a time when women in the Navy were barred from serving on submarines. Treece nonetheless fell in love with the experience.

“The men aboard the USS Newport News were so impressive,” she recalled. “Technically savvy, high stakes, high standards, and a brotherhood that I so desperately wanted to be a part of.”

Several years later, though, the Navy changed its rules and allowed women to served aboard submarines. Treece then had the chance to pursue her dream.

She shared this story Friday at the Institute for Executive Women’s Power Breakfast at the Brunswick Country Club. The program brings in inspirational women speakers monthly.

Treece, who also earned her master’s degree in nuclear management before working as a certified Navy nuclear engineer, served among some of the first women aboard the USS Florida, a nuclear powered guided missile submarine.

Today, she works as a program manager for Jered LLC, a PaR System company and world leader in marine systems. Treece oversees more than 30 defense contracts.

She shared some of the lessons she’s learned working in the male-dominated field.

“The first lesson started with my education to pursue the Navy ROTC scholarship,” she said.

Many in the small town in which she grew up held archaic ideas regarding gender roles, she said. Several people questioned her decision to pursue a career as an engineer in the Navy.

“When well-meaning adults who have unconscious bias put their little girls in traditionally female paths, they never really consider an alternative,” Treece said. “I however was lucky enough to have parents and a few teachers who recognized my passion for math and science, and they helped guide me toward a career in STEM.”

When she arrived to serve on the USS Florida, Treece learned she was among three women who would serve onboard.

She was quickly embraced by the crew, though, and by its captain.

“The lesson that I learned that day has stuck with me,” she said. “Be authentic. Show up and be yourself. Showing up is the best thing that you can do to push the boundaries of what people expect of women.”

All the crew really cared about, she said, was her competence.

“They did not care about what my gender was, as long as if there was a fire I could put it out, if we were on mission they could trust that I would make the right call and I would bring them home safely,” she said.

Treece proved herself among the best on her crew and gained the respect of those aboard, she said. Later, when she was pregnant with her son, she made sure to stay visible throughout her pregnancy.

“I wanted the sailors to see me teaching submarine tactics nine months pregnant,” she said. “… I wanted my coworkers not to be weird about me pumping breast milk on my breaks.”

Treece found that her own brand of leadership could succeed in a male-dominated field.

“It is all of our responsibilities to push the envelope for our daughters and sons so they live in a world where career is determined by passion alone and not gender,” she said.

The Institute for Executive Women provides professional leadership training to women through seminars, coaching and networking.

Catherine Blake, president and founder of the organization, announced during the breakfast that the institute is collecting donations of shoes appropriate for work for men and women enrolled in programs sponsored by the STAR Foundation in Brunswick.

Shoe donations can be brought to the next breakfast April 3 or to the STAR Foundation office in The Wick, 1612 Newcastle Street.