The event is put on by the Wounded Warrior Regiment, based at Quantico, Va., which works with Marines and their families to adapt to and overcome illnesses and injuries. Currently, 661 Wounded Warriors nationwide receive services 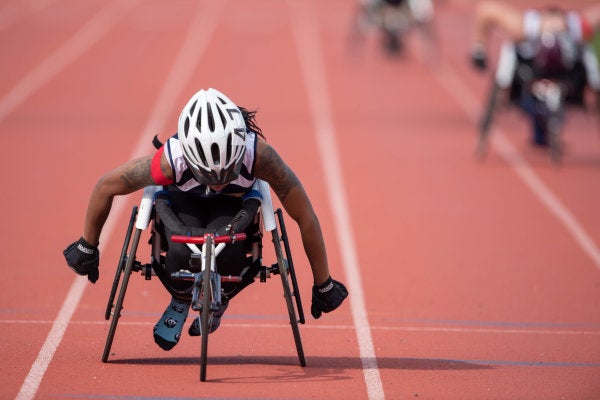 CAMP PENDLETON — Gunnery Sgt. Steven McKay spun his wheelchair around amid a sea of swarming defenders to score from the paint.

With spectators screaming “Go Marines!” from the bleachers at the field house, wheelchairs clashed, arms tangled and the race was on to the other side of the court where a player from the Defense Forces of Georgia scored a quick basket.

“It's disheartening,” McKay, 33, of Fallbrook said Wednesday, March 6, after losing the game as a member of Wounded Warrior Battalion — West at Camp Pendleton. “At the same time, it was a good competition. They made better decisions. We made some mistakes and they capitalized on that and the score shows it.”

McKay, who previously served with 1st Marine Raider Battalion and then with Cyber Protection Team 95, was among 165 wounded, ill or injured Marines, veterans and international athletes who for the past week have been competing in the adaptive sports invitational at this seaside base.

The event is put on by the Wounded Warrior Regiment, based at Quantico, Va., which works with Marines and their families to adapt to and overcome illnesses and injuries. Currently, 661 Wounded Warriors nationwide receive services. Some are assigned to the regiment, others remain attached to their units and some have transitioned to civilian life.

Along with promoting recovery, the trials help warriors cultivate camaraderie with other athletes.

McKay, like many of the participants, was competing in several sports including wheelchair rugby, shooting and swimming.

“For me, it's getting a perspective of another individual in my community,” said McKay, who suffered a spinal injury during a 2014 deployment to Afghanistan. He has partial paralysis on his right side, is in constant pain and has muscle atrophy.

“There are single and double amputees and we all collaborate in the same environment,” he said.

McKay was assigned to Wounded Warrior Battalion — West in September, when it became apparent he wouldn't be able to serve in his cybersecurity capacity for the Defense Information Systems Agency at Scott Air force Base near St. Louis.

Since joining the battalion, his treatment has included physical therapy and counseling in preparation for the transition from active duty to civilian life, where he plans to pursue a career in cybersecurity.

McKay said he knew the risk he was taking when he joined the Marines and later became part of the United States Marine Corps Special Operations Command.

“I came into this community taking the warrior path, to be a direct support to those who go forth and battle our enemies,” he said. “I fully accept the outcome. Mine came with a price but not as significant as others who have been laid to rest and we can't see anymore.”

And, while he misses that sense of camaraderie and purpose, he said, he's reestablished that in the Wounded Warrior community.

“I've got tremendous respect for those individuals that have to be in wheelchairs and on crutches and that is a main part of their life,” he said. “They didn't ask for it. I'm fortunate I can walk on my own legs. It's humbling to be in a wheelchair a couple of hours and to understand what they have to live with 24/7.”

One Wounded Warrior he deeply respects is Issac Blunt, 27, also of Fallbrook.

Blunt is missing both of his legs above the knees and lost his left eye and four fingers on his left hand after stepping on an improvised explosive device in 2011 while deployed with the 1st Battalion/5th Marines in Sangin, Afghanistan.

“Look at that beautiful face,” McKay said pointing at Blunt, who was rejoicing in winning a bronze medal in the wheelchair basketball finals for Wounded Warrior Battalion — East/Veterans. “He's the nicest man I've ever met. He helps guys including myself. He's got skills but he's humble. I just dig that.”

The admiration was mutual. Blunt attributes his recovery to the Wounded Warrior camaraderie.

“Being able to have friends — brothers and sisters — who have been in the military and know what it's like, it's like a family,” he said. “I don't see other players as injured. They inspire me regardless of why they're here. They are putting in an effort to learn a game they've never played before. To do that with a smile on their face, that inspires me.”