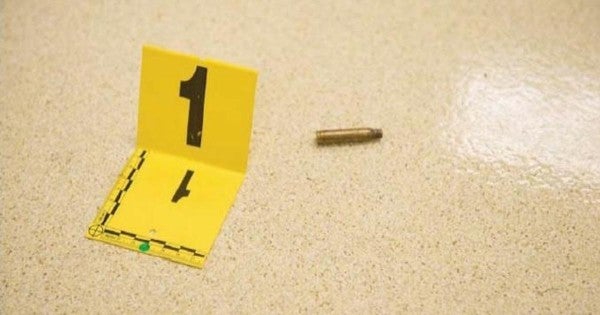 A new Air Force investigative report paints a detailed picture of the chaos that erupted when emergency responders in August 2018 searched Wright-Patterson Medical Center for an active shooter that turned out to be nonexistent.

The report — by the Air Force Office of Special Investigations — also reveals for the first time that a responder hurt in the 2018 active shooter scare at Wright-Patterson Air Force Base was injured by a bullet from a service member firing an assault rifle to open a locked door.

The Dayton Daily News obtained the 214-page investigative report through a Freedom of Information Act request made to the special investigative unit in December. The Air Force redacted more than 100 pages of the report, citing privacy rules and documents originating from another agency.

A member of the base's security forces squadron fired five rounds from his M4 carbine at the glass of a locked door in the base medical center to open it during the Aug. 2, 2018 incident. One of the rounds struck the top of another defender's M4, causing shrapnel to hit his hand.

The injured service member “sustained minor injuries in his left thumb from small pieces of metal that broke off his M4 after it was struck by one of the rounds,” the report states.

The security forces member who fired the M4 remains a “valuable and contributing member” of the unit, said base spokesman Daryl Mayer. Any specific actions taken in reaction to the security member's use of the M4 during the false alarm is not releasable under the terms of the privacy act, Mayer said.

“After reviewing all the facts and circumstances, the Airman's commander determined the weapon discharges were not justified and then took the appropriate action,” Mayer said.

An AFOSI spokeswoman said she had not seen the report and declined to comment on it.

The report includes summaries of around 100 interviews and witness statements, photos from the scene and other exhibits. It paints a detailed picture of the confusion that erupted during the August 2018 false alarm.

One person interviewed told Air Force investigators that she was at her desk in Wright Patterson Medical Center when she received a text message notifying her there was an active shooter in the facility. She grabbed a patient she didn't know from an exam room and two other coworkers and they locked an office door, barricaded it with a chair and hid, the report states.

After an undetermined amount of time, the woman told investigators she heard five gunshots and felt drywall and debris hit her face and head. She recalled seeing bullet holes in her door, the wall and the printer above where she was seated, according to the report.

The confusion during the August 2018 false alarm stemmed from two exercises, including an active shooter drill taking place at the Kitty Hawk Chapel and a mass casualty exercise the 88th Medical Group held at the Wright-Patt Medical Treatment Facility, according to the report.

A transcript of radio conversations between base security forces in the report shows many service members were confused as to whether an actual active shooter incident was occurring or if it was part of an exercise.

The “poorly planned and executed” base exercises caused a chaotic response to the August false alarm, according to a report about the incident released in December.

An uncoordinated response from law enforcement in August could have resulted in “serious injury and property damage” and terrified staff and civilians in a hospital filled with “fog and friction,” the report stated.

Active shooter false alarms are not uncommon on military installations. But, a Dayton Daily News investigation found that few others unfolded like the one at Wright-Patt did.

When the August 2018 active shooter scare occurred, it resulted in local, state and federal law enforcement responding to the base.

In the nearly 14 months since the incident, the base has made several changes in an attempt to avoid a repeat of last year's problems, Col. Tom Sherman, 88th Air Base Wing and installation commander has said.

Since the false alarm, Sherman said the base has added to the radio systems it uses so it can better communicate with outside law enforcement. Wright-Patt linked its emergency systems with 911 call centers so the base is sharing information with the appropriate dispatch locations throughout the area.

If off-base authorities are called to assist they now know to respond to a specific “staging area” for emergencies, Sherman said.

“These changes were put to their first test during our Active Shooter tabletop exercise in August where we worked through a scenario together with members of Dayton SWAT,” Mayer said. “We plan to build on this step to ensure our forces are properly trained and able to provide a safe and secure environment for all our Airmen.”