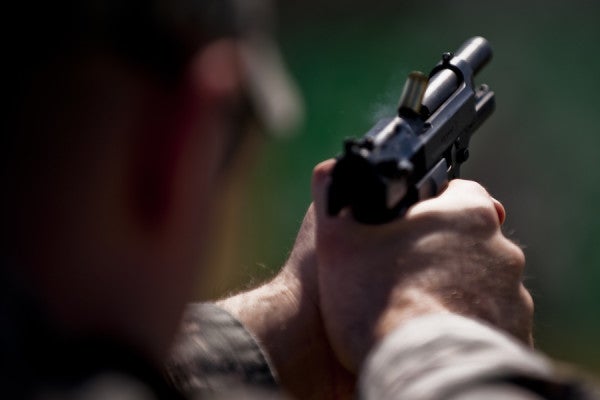 A new policy will allow Wright-Patterson Air Force Base personnel to request permission to transport licensed firearms to and from the base.

“We recognized that part of the population here was interested in seeing a change in our policy when it came to the transport of privately owned firearms on the installation,” Maj. Julie Roloson, 88th Security Forces Squadron commander, said in a release. “After much careful analysis, we established appropriate procedures to satisfy that intent without sacrificing the safety and security of the base.”

To be eligible, individuals must have a valid CCW permit, a valid Department of Defense ID card to include Common Access Cards, and must be either be active duty, Reserve, Guard, retired military, dependents 21 years or older and DoD civilian employees.

Registration will happen in three phases, according to Wright-Patterson:

People who wish to carry their POF — privately owned firearm — on the installation must submit an Air Force Form 1314, Firearm Registration, and sign a Statement of Understanding for Possession of POF, the base said.

For Active Duty, Guard, Reserve and DoD civilians, individuals must complete and submit the AF Form 1314 to their unit commander or equivalent for authorization. Once approved, individuals will present the form to the Security Forces Pass and Registration office, the base said.

Retired military and dependents 21 years and older will need to go to the Security Forces Pass and Registration office to complete the AF Form 1314.

Authorizations will be valid for two years.

This represents an updating of previous base policy. A 2016 Pentagon rule allows base commanders to permit troops to apply to concealed carry personal weapons on base.

Base law enforcement officers and military police typically have been permitted to both conceal and open carry guns on base, according to media reports.

Some bases allow active and retired law enforcement officers to carry a concealed weapon on base if they are authorized to do so, Military.com reported last year.