Cpl. David Boone found himself on the wrong end of mustard gas fighting in France in World War I. He... 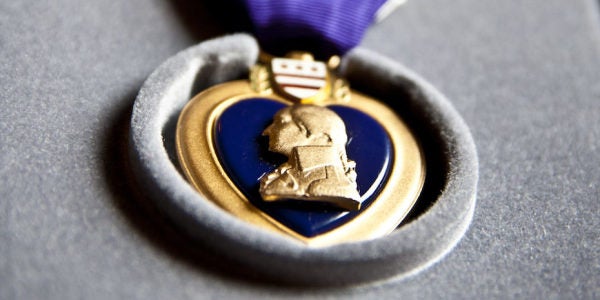 Cpl. David Boone found himself on the wrong end of mustard gas fighting in France in World War I.

He recovered and continued to serve, but he never received a Purple Heart for his efforts — until now.

“I think this is a tradition here in Northeastern Pennsylvania,” Cartwright said. “We honor our veterans, and we don’t stop honoring our veterans.”

He served with the American Expeditionary Forces in France during WWI and participated in the Aisne-Marne Counteroffensive, which was part of the legendary Second Battle of the Marne.

The battle occurred between Aug. 4 and Aug. 22 in 1918 and David was wounded on Aug. 18. He recovered sufficiently to return to duty and was discharged and returned home in 1919.

“We’re talking about Cpl. Boone, a doughboy over there in France, fighting for the American Expedition, looking across the fields and what do they do — hit him with mustard gas,” Cartwright said. “Thankfully he survived, returned home, fathered a huge family and they’re all here today.”

On top of receiving his Purple Heart, Boone also received the World War I Victory Medal & Silver Victory Button which is awarded to United States military service members who served from April 6, 1917, to November 1918 as part of the First World War conflict.

State Rep. Mike Carroll, D-Avoca, was also in attendance and presented the Boone family with a citation from the Commonwealth of Pennsylvania.

A statement from borough Mayor Robert Mullen was then read by John Boone’s son, Tom Boone, which declared Aug. 18 as Cpl. David Boone Day in Avoca.

John, who is a World War II veteran, first inquired to Cartwright about his father receiving a Purple Heart three years ago.

For his father to receive the award is a dream come true for the entire Boone family.

“It’s like I finally found the Holy Grail,” John said.