The sinking was the single largest loss of life for the Coast Guard during WWI. 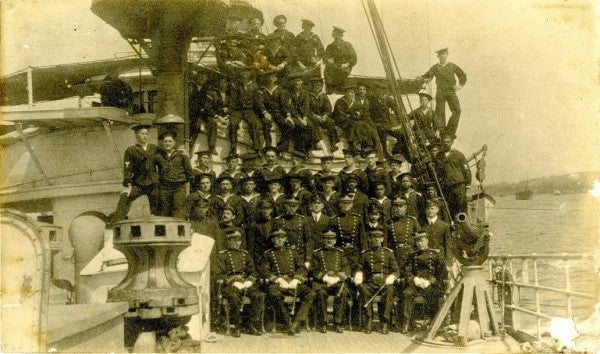 On Sept. 26, 1918 the USS Tampa was struck by a German torpedo while sailing through the Bristol Channel, killing all 130 crew members, including 25-year-old Cambridge resident Francis Joseph Taylor.

More than a century later, the U.S. Coast Guard is looking for Taylor's descendants to give them the Purple Heart he received for making the ultimate sacrifice during World War I.

Taylor is one of eight crew members from Massachusetts to have their Purple Heart go uncollected because the U.S. Coast Guard has not been able to find any living relatives, said Nora L. Chidlow, archivist at the United States Coast Guard Historian's Office, in an email.

The Coast Guard began posthumously awarding the medals to crew members of the Tampa in 1999, according to the Historian's Office website. About 40 Purple Hearts have been awarded so far, and more are being processed, Chidlow said.

“Our office has diligently researched these men and their descendants for the past five years,” Chidlow said.

Taylor was born in the West End of Boston and was the only son of John J. and Anna Taylor, according to a 1918 war casualties article in the Cambridge Chronicle. His parents moved to Cambridge a year after he was born, and he attended school in the city. His parents lived at 4 Winslow St. at the time the article was written.

After graduating from high school, Taylor was hired by Boston Bindery, where he learned to be a stamper, according to the article. He also had two sisters, May and Eleanor.

Taylor enlisted in the U.S. Coast Guard on Oct. 29, 1913, the Cambridge Chronicle reported in 1920. He was sent overseas in September 1917, and was promoted to Chief Radio Electrician in August of that year.

“He was an expert operator and has tutored many young men who are also holding positions in the Navy,” the war casualties article stated. “His tragic fate, coming in his early manhood, is a great blow to his parents, as well as his two sisters, Mrs. Fred W. Hiatt, of Revere, formerly Miss May Taylor, Eleanor Taylor, who lives at home.”

Taylor was originally stationed on the USS Androscoggin, which was also a Coast Guard cutter serving in the European Theater, according to logbook entries Chidlow sent in an email. He was given a temporary transfer from the ship on Aug. 14, 1917.

On Aug. 24, 1918, Taylor jumped overboard to save an officer who fell into the water while crossing the gangway from the HMS Riviera to shore. The officer had been “under influence of liquor but rescued safely,” the logbook entry states.

The Tampa, originally known as the USS Miami, was launched in 1912, and conducted international ice patrol following the sinking of the Titanic, according to the U.S. Coast Guard Historian's Office. Its name was changed to the Tampa in 1916, due to its close relationship with the city, and was one of six Coast Guard cutters that conducted convoy escorts during World War I.

The ship, which was armed with four 3-inch guns, lost only two of the 18 ships it escorted and was awarded a special commendation for exemplary service.

It had just completed its 19th convoy and was sailing alone toward the Welsh port of Milford Haven to recoal when it was struck by a torpedo fired by the German submarine UB-91, according to the U.S. Coast Guard Historian's Office. It sunk in just under three minutes, killing all 130 members, including 111 Coast Guardsmen.

The last radio message picked up from the Tampa was “Help! For God's sake, help!” according to the Chronicle's 1920 report. It was the single largest loss of life for the Coast Guard during WWI.

The Coast Guard later named a subchaser in Taylor's honor, according to the booklet. Rev. P.H. Callanan held an anniversary Mass of requiem for Taylor at St. Peter's Catholic Church on Sept. 28, 1920, according to the Chronicle. It was the second Mass held in his honor since he was killed.

The following year, Taylor's sister, May, and her husband named their newborn son in his honor, according to a 1921 Cambridge Chronicle article.

That same year, more than 300 residents gathered for the dedication of Taylor Square, according to the Chronicle. During the ceremony, which included 100 members of the Cambridge post of the American Legion, Mayor Edward W. Quinn noted that while some objected to streets being named after war veterans, he wanted to make sure those who were killed in WW I were honored in a lasting way.

The square had been previously known as Wyeth Square in honor of a family with roots in Cambridge that dated back to the 17th Century, said Charles M. Sullivan, executive director of the Cambridge Historical Commission, in an e-mail.

During the war an organization known as the American Gold Star Mothers formed to support those who lost loved ones, according to the booklet remembering the Tampa.

“Many Tampa mothers became Gold Star Mothers upon the loss of the ship and her crew,” the booklet reads.

In 1929, Congress appropriated federal funds to organize a series of pilgrimages to Europe so more than 6,700 Gold Star mothers and widows could visit the graves of their loved ones, according to the booklet. About 26 mothers and windows of crewmembers from the Tampa made the trip in 1931, among them was Taylor's mother, Anna. His sister, Eleanor, also made the trip, according to a 1931 article in the Cambridge Tribune.

“For Tampa mothers and wives, whose sons and husbands were lost at sea, the main feature of their pilgrimage was a memorial wreath toss service at sea held on 30 May 1931, as the ship approached the English Channel and the site of Tampa's watery grave,” the booklet reads. “An anchor shaped wreath, along with a hydrographic drift bottle containing the names of the pilgrims on board, was ceremoniously thrown into the ocean.”

Anyone with information about possible living relatives of Francis Joseph Taylor is asked to contact Nora Chidlow, Coast Guard Archivist, at nora.l.chidlow@uscg.mil or 202-559-5142. To submit applications for Tampa Purple Hearts, please also contact Chidlow. Documentation showing the descendant's relationship to the Tampa crew member, such as family trees, pages from family Bibles, birth/death certificates, and/or pages from Ancestry or other genealogical applications, is required to apply for a Purple Heart.