"He was just the most honorable, loyal, salt-of-the-earth kind of guy." 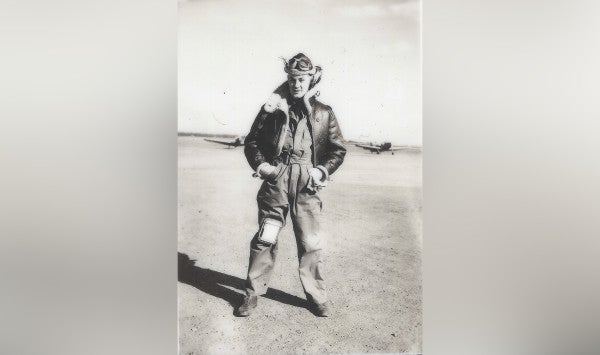 He never liked the name Harold, and “Lucky” just fit. And if Harold “Lucky” Bourgoin were alive, he undoubtedly would call himself lucky.

He lived for more than eight decades with a bullet lodged in the back of his head, was married for 73 years, was a world-class marksman, retired as a highly decorated lieutenant colonel in the Air Force after serving in three wars, and helped raise five successful boys.

Not that Lucky, who lived in Bellevue for five decades, would have bragged about any of this. That just wasn’t the style for those in his generation.

On April 25, Mr. Bourgoin died from complications of the coronavirus. He was 97.

“Everyone who knew him liked him a lot,” said Mike Bourgoin, the oldest of Lucky’s five sons, who said it was hard not being allowed to see his father in the hospital. “He was very much a good man.”

Said Dan Bourgoin, Mr. Bourgoin’s youngest son: “He was just the most honorable, loyal, salt-of-the-earth kind of guy. When we talked about his experiences in life, and in particular the wars, he would say, ‘People talk about guys who went to World War II as being these heroes. The heroes were the guys who didn’t come home, and the rest of us are just ordinary guys put in extraordinary circumstances.’ “

Fair enough, but by just about any standard, Mr. Bourgoin lived an extraordinary life.

When Lucky was 13, his father died in an automobile accident. Shortly thereafter, Lucky was hanging out in a quarry in St. Louis when a stray bullet from a .22 rifle lodged into the back of his head in the base of his skull. That is where it stayed for the rest of his life.

“There was no one around, and no one knows where the gun was fired from or who fired it,” said Dan Bourgoin. “It was from a long ways away.”

Mr. Bourgoin was 19 and working as an apprentice tool and die maker when Japan bombed Pearl Harbor on Dec. 7, 1941.

Because of his interest in aviation, he enlisted in the U.S. Army Air Corps as an aviation cadet. He began flight training and eventually landed in the 376th Heavy Bombardment Group. He flew 52 missions during World War II over Italy, Romania, Austria and Germany, and was severely wounded by gunfire from a German fighter plane while serving as a navigator in a low-altitude raid on the fuel refineries in Ploesti, Romania.

“They came in at a very low level and we lost more planes in that action than in any other action in World War II,” said Mike Bourgoin. “A cannon shell from a fighter exploded close enough that he had shrapnel in his leg.”

A year after the war ended, in 1946, Mr. Bourgoin met Josephine “Jo” Baricev, who was working as a waitress at a cafe in Biloxi, Mississippi, where he was stationed. Family legend has it that Mr. Bourgoin won a coin toss with some buddies to determine who would ask her out. Lucky again lived up to his name, winning the coin toss — and the two married the next year.

For the next two decades, the couple was stationed at Air Force bases around the country, while starting a family. In addition to the five boys, the couple also had a daughter who died shortly after birth.

Meanwhile, Mr. Bourgoin’s military career continued to blossom. He flew B-29s on several of the postwar nuclear tests in the South Pacific. He flew 24-hour airborne alerts in B-52s out of Guam during the Cuban missile crisis.

In 1965, Mr. Bourgoin retired from Air Force having more than 11,000 flight hours as a pilot/master navigator/bombardier and instructor on B-52s. He was on active duty in World War II, the Korean War and the Vietnam War and was awarded two Distinguished Flying Crosses, six Air Medals, two Presidential Unit Citations for extraordinary heroism and the Purple Heart.

“My dad would probably be embarrassed by the things we are saying about him, because he never liked to do that,” Dan Bourgoin said. “He never talked about himself.”

Mr. Bourgoin was known for his skills as a marksman, and Mike said his father at one time held world target records. Dan Bourgoin said his father had aspirations of making the 1964 U.S. Olympic rifle team, but said he missed a qualification while on active duty during the Cuban missile crisis.

After retiring from the military, he ran Lucky Mac’s resort on Lake Pend Oreille in Hope, Idaho, before moving to Bellevue in 1968. After working for a few years at Boeing, he got a degree in business administration from the University of Washington and worked in real estate until 1985 and settling into retirement with Jo.

“I think they would have made it to 75 years if it hadn’t been for this whole thing,” Dan Bourgoin said.

Jo, who lives in a memory-care facility, has also tested positive for the coronavirus, but has shown no symptoms.

In addition to the five surviving boys, the couple had 10 grandchildren and two great-grandchildren, with another on the way. Most of the family was on hand last fall when Mr. Bourgoin was honored for his military service during a Seahawks game. He strolled around the perimeter of the field after the ceremony, shaking hands with fans, and soaking up the experience with his family.

“I think he was probably most proud of us,” Dan Bourgoin said of he and his four brothers. “He wasn’t a guy who made a ton of money — we were a typical middle-class family — and I think he would be most proud that we all ended up being fairly capable people and fairly good people who have raised families of our own and kept our families together. He and my mom sacrificed a lot for each of us. We were always the focus of their lives.”