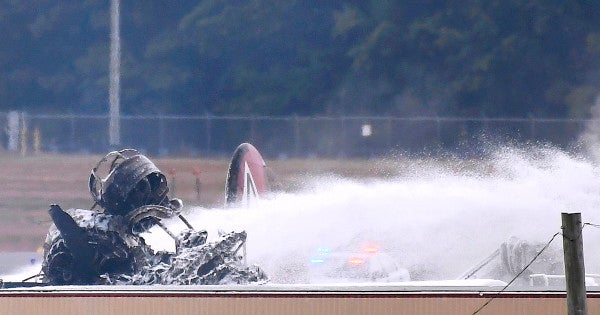 A vintage plane crashed about 10 a.m., bursting into flames and sending up a large plume of smoke that could be seen for miles. Sources say it crashed into a shed as it was trying to land.

While there is no official word on the number of deaths, sources say at least two people have died and three others have critical injuries.

The plane is a B-17 Flying Fortress, according to the Windsor Locks Fire Department.

Six patients are at Hartford Hospital, a hospital spokesperson said.

The airport confirmed that the plane is a Collings Foundation World War II aircraft. The airport is closed; the Federal Aviation Administration said it has put in a ground stop for flights destined for the airport.

Numerous fire departments from the area were called to the scene, causing area towns to scramble to line up coverage. At least two dozen emergency vehicles were at the crash site.

At least one victim was being airlifted from the scene at 10:50 a.m.

The plane is one of five — two World War II fighter planes and three bombers—that are at the airport this week for tours and flights.

The most recent fatal crash of a vintage war plane happened in Fredericksburg, Texas in November 2018. The pilot and a passenger in a P-51D Mustang fighter aircraft were killed when the plane, which had just participated in a flyby, crashed into a nearby parking lot.