A vintage small plane crashed onto the 101 Freeway in Agoura Hills, California, on Tuesday afternoon, shutting down the freeway... 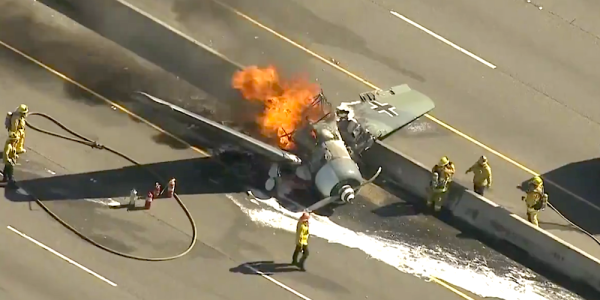 A vintage small plane crashed onto the 101 Freeway in Agoura Hills, California, on Tuesday afternoon, shutting down the freeway in both directions, authorities said.

Los Angeles County firefighters arrived at the crash site near Liberty Canyon Road about 1:50 p.m. According to spokeswoman Vanessa Lozano, the plane crashed “in the middle of the freeway.”

LATEST: Vintage plane erupts in flames after crash-landing onto the 101 Freeway in Southern California.

No vehicles were involved in the crash and no injuries were reported, authorities say. https://t.co/lJCJf5qXBD pic.twitter.com/Tb7KpfD6Rt

No injuries were reported, and no one was taken to a hospital. Los Angeles County Fire spokesman Marvin Lim said he did not know whether the pilot was able to safely exit the plane himself or had been removed by rescuers.

About 4:15 p.m., the slow lane north and southbound reopened, said California Highway Patrol spokesman Chris Baldonado. Because the crash happened between the on and off ramps, traffic is being directed off the freeway and immediately back on the other side of the crash, he said.

Images tweeted by drivers on the freeway showed the vintage airplane in flames, emitting a black cloud of smoke. Firefighters put out the flames about 2:15 p.m., officials said.

National Transportation Safety Board spokesman Terry Williams said the agency was “in the very early stages of the investigation and will have more information tomorrow.” Officials identified the plane as a North American SNJ-5 (T-6), a trainer aircraft used by the U.S. Army Air Forces, U.S. Navy, Royal Air Force and others during World War II.

Chris Rushing, president of the nonprofit Condor Squadron, said the plane belongs to his organization. According to its website, the group was formed in 1965 to preserve World War II history.

“The pilot obviously had a catastrophic failure and had to put it down on the 101,” Rushing said. “Thank God he’s OK and no one got hurt on the ground.” Rushing said the pilot, whom he identified as Rob Sandberg, was able to get out of his plane.

Cole Puente, who was driving on the freeway when the crash occurred, said traffic was sparse but that he was surprised no injuries had been reported. “I find that really remarkable,” said Puente, a 28-year-old Thousand Oaks resident. “I’m guessing it was just a very fortunate set of circumstances.”