Oh, the 1940s, the glory days of military training videos: Back when PME's were produced with a Hollywood director's panache, and a cast of leading men were brought in to break down fourth walls with a devilish wink and a nod to the camera before dispensing some sage advice 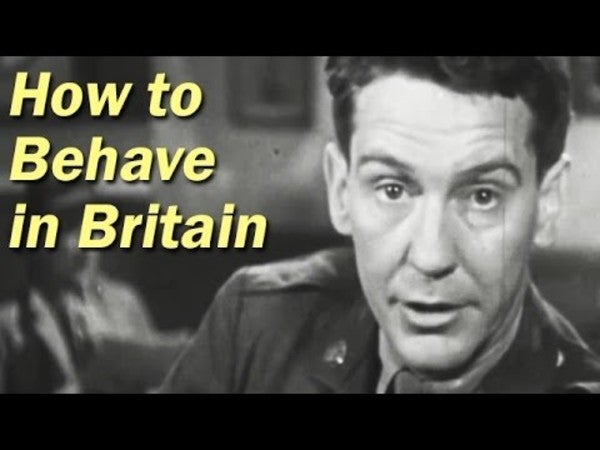 Oh, the 1940s, the glory days of military training videos: Back when PME's were produced with a Hollywood director's panache, and a cast of leading men were brought in to break down fourth walls with a devilish wink and a nod to the camera before dispensing some sage advice, like how to crack a tank.

While not every pearl of wisdom from retro military training videos withstands the test of time — see the Navy's 1967 video: How To Succeed With Brunettes — a recently resurfaced clip from a 1943 training video starring Burgess Meredith of Rocky fame seems to stand up in a few parts, but not all (more on that later.)

The clip, How To Behave In A British Pub, made the rounds online this week after Daniel Holland shared it on Twitter:

The clip's popularity is hardly surprising. It plays much like a World War II-era documentary special, with the former Army Air Corps captain guiding American G.I.'s through the dos and don'ts of British pub etiquette.

“Oh wait, before we go in, let me tell you a bit about an English Pub,” says Burgess, who's probably best known for his role as Mickey Goldmill in the Rocky films. (Sadly, he doesn't tell the audience that they're gonna eat lightning and crap thunder at any point in the video.)

“It's not like a saloon, more like a club,” he continues. “A club for men and women who haven't a great deal of money and don't drink for the sake of drinking, but for the company.”

From the get-go, the message is clear: This might not be the place to get completely shit-housed drunk during your few days away from “the war” — though, we can assume this video is probably being made because that's exactly what American troops did anyway.

Burgess continues with his tour of a British watering hole:

“Now these pubs are open for a couple hours in the middle of the day, and again in the early evening,” he says. “And men and women after their days work, and they work long and hard hours, come in for a bitter or a mild — oh, that's beer, to you, and incidentally the beer isn't cold in England. No, they don't like it cold and they haven't any ice, see, so if you like beer, you better like it warm. What's that? The difference between bitter and mild? I dunno, I dunno, one's bitter and one's mild, better find out for yourself.”

As the audience follows Burgess into the pub, another American soldier arrives and, well, acts like a complete jackass, doing everything you probably shouldn't do, anywhere. He's immediately abrasive and mocks a pair of Scottish soldiers for their kilts; interrupts a board game between two other patrons; and then makes a big show of his wealth by waving his cash around; before he vanishes with a poof into a cloud of smoke.

“I done that, sure,” Burgess says. “Had to get rid of that soldier, he was too bad of an example.”

The rest of the video plays out like you'd expect: Burgess orders a beer, takes his time chatting with people, gets invited to a game of darts and politely declines, saying he'll watch first to learn how to play, then offers to buy the others a round — you know, generally just behaving like a guy enjoying leave, and not being an asshole.

The clip is just a small portion of a much longer instructional film entitled How To Behave In Britain, and while some of the lessons remain timely, other aspects don't hold up — like when Burgess refers to a black soldier as a “colored boy,” and visibly ties himself into knots explaining to viewers that the Brits in 1943 are a lot less racist than most Americans at the time.

In a later portion of the film, Burgess and a fellow soldier, who is black, exit a train, at which point an elderly British woman, who is white, stops the two men and thanks them, inviting the black soldier to tea.

It's at this point that Burgess turns back to the camera and with a furtive look to his left and right explains to viewers that this sort of interaction “might not happen at home,” where African-Americans were still subjected to legalized racism and segregation under Jim Crow laws.

“Now look men, you heard that conversation, that's not unusual here,” Burgess says. “It's the sort of thing that happens quite a lot.”

“Now let's be frank about it, there are colored soldiers as well as white here, and there are less social restrictions in this country. An English woman asking a colored boy to tea, he was polite about it, and she was polite about it. Now, that might not happen at home, but the point is, we're not at home, and the point is too, if we bring a lot of prejudices here, what are we going to do about them?”

Few things are as sure to ruin that warm fuzzy feeling you had watching the scene in the pub like the ugly truth that white soldiers had to be reminded not to be too racist abroad. The subtext of the video is obvious, though delivered without a sense of irony: save that bigotry for back in the States, once we've finished defending the world against fascism and tyranny.

It's too bad we can't divorce How To Behave In A British Pub from the feature-length training video, with its silly and lighthearted tips for how to not be a schmuck at a bar, or the hilarious cameo by comedian Bob Hope, who shows up to steal Burgess' money. But like history itself, we can't — or rather, we shouldn't — cherry-pick which portions we choose to remember: If you're gonna take a swig from that mug o' nostalgia, you have to take the bitter with the mild.