A WWII veteran just got an honorable discharge from the Army, 75 years after he was booted for being black

The Army Board for Correction of Military Records unanimously agreed in June to change Henry's discriminatory "blue discharge" from 1945 to honorable. It found that an injustice had occurred. 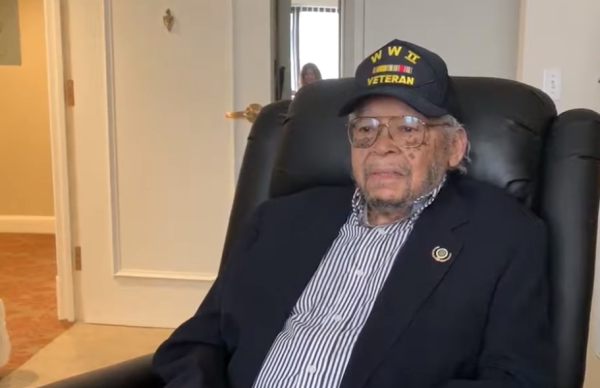 Nearly 75 years after he was forced out of the Army because he was black, World War II veteran Nelson Henry Jr. has received an honorable discharge and has the papers to prove it.

The Army Board for Correction of Military Records unanimously agreed in June to change Henry's discriminatory “blue discharge” from 1945 to honorable. It found that an injustice had occurred.

But after fighting for decades, Henry, 96, of Philadelphia, said he would not believe it until the document arrived in the mail. In a family video, Henry struggled for words when his son, Dean, who headed the appeal, presented the discharge certificate to him last week.

“It's difficult to believe. I waited so long,” Henry said in an interview Thursday in his Logan Square apartment. “This was more like a shock, a miracle.”

Added Dean Henry, 66, of Berwyn: “It kind of renews your faith when a miracle happens. We prayed about it as a family.”

Henry was among more than 48,000 soldiers who were given “blue discharges” between 1941 and 1945. Of those, a disproportionate number went to black, gay, or lesbian service members. Neither honorable nor dishonorable, the blue discharge denied them access to military benefits such as a funeral honor guard. Printed on blue paper, the discharge was notice to potential employers who refused to hire soldiers without an honorable discharge.

After several failed appeals in the 1940s to have his discharge changed and his military benefits reinstated, Henry stopped trying until recently. Lawyers with the Golden Gate University School of Law Veterans Legal Advocacy Clinic and Legal Aid at Work, both based in San Francisco, agreed to assist and filed an appeal in March. The Army agreed to expedite the appeal because of his age — Henry was 95 at the time.

“It was justice delayed,” Elizabeth Kristen, a senior attorney at Legal Aid at Work, said Thursday.

Henry was a junior pre-dental major at Lincoln University when he enlisted in the Army in 1942. He was placed in the Army Specialized Training Program, which was created to meet the wartime demands for junior officers.

A college football knee injury aggravated in the Army kept Henry from shipping out with his unit. Henry landed in the stockade for 30 days for several minor infractions that his lawyers contend were unsubstantiated — letting a fire go out in a coal stove that heated a tent that housed black soldiers, ignoring a command, and stealing a baseball glove.

Fearing the possibility of more disciplinary problems, Henry reluctantly accepted a suggestion from his superior officer to accept a blue discharge, an administrative separation that avoided a court-martial. On Oct. 17, 1945, Pvt. First Class Nelson Henry was discharged from the military and given $63.90 in travel pay to return home. It ended his dreams of becoming a dentist.

The Army board said that it found no evidence of misconduct and that Henry had been targeted by his superiors, and “that there may have been an environment of racial discrimination” that led to his separation from the Army.

“Like going back into slavery. That's what it felt like,” Henry said on Thursday of his military experience during World War II.

The Army replaced the blue discharges in 1947 with two new classifications, general and undesirable. Soldiers who received blue discharges had to appeal them on an individual basis.

Back in Philadelphia, Henry raised three children with his wife, Lydia. He drove a taxi for many years, earned a bachelor's degree in psychology at Temple University, and later worked for the Pennsylvania state employment office.

He kept boxes filled with his military records, but tried to forget his military experience “to keep his sanity.” His daughter, Lydia, said the family watched her father struggle to come to grips with what happened to him.

“It was a terrible weight,” she said. “I never really believed he would get justice in his lifetime.”

The soft-spoken Henry has become a celebrity in the assisted living apartment building where he has lived for several years. His wife died in 2016.

“I'm glad he fought for himself,” said Kenneth Smith, the building's security chief. “That's inspiring, what he did.”

Last week, Henry received a DD Form 214, a discharge certificate issued by the military upon leaving active duty under honorable conditions. A copy of his blue discharge was attached and stamped “void.” His son is applying for medical and other benefits that Henry missed the chance to get.

“This certificate is awarded as a testimony of honest and faithful service,” it reads.

His family framed the certificate and gave it a place of honor in his apartment on a wall surrounded with keepsake photographs.

“I keep looking at it over and over again. It is beautiful,” Henry said with a broad smile.

His lawyers say Henry's case may serve as a precedent for other service members who believe they were wrongfully discharged from the military because of their sexual orientation. Henry said he hopes others will be inspired by his fight and urged them “to keep on keeping on.”

“I don't have that much time left. If I go tomorrow, I'll go with a smile. I am happy now,” he said.