A WWII Veteran’s Medals Were Stolen, So A Probation Officer Did Something About It

When he died, Frederick C. Sylvia, Jr., wanted to be buried with his four combat military medals from World War... 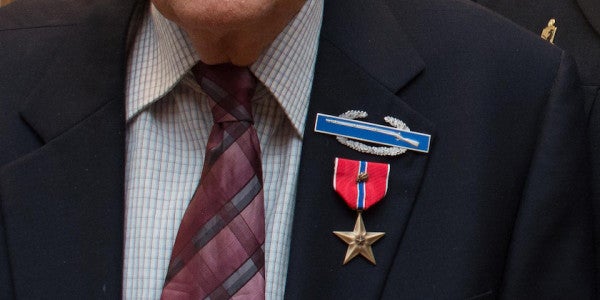 When he died, Frederick C. Sylvia, Jr., wanted to be buried with his four combat military medals from World War II.

But a few months before Sylvia's death in February 2012, his medals were stolen by an employee at an assisted-living facility in Greater New Bedford, where the combat veteran was staying at the time. Though the employee was subsequently arrested and prosecuted, the medals were never found.

“The family didn't have the heart to tell him that the medals were gone,” said Mark Costa, the assistant chief probation officer at Fall River District Court who also serves as the vice chairman of the Fall River School Committee.

Costa, himself an Army National Guard veteran, supervised a Fall River woman who was prosecuted for receiving some of the stolen property. Over the past year and a half, Costa teamed with Ray Hague, the veterans agent for the city of Fall River, Mary Vezina, an investigator for Veteran's Services in Fall River, and Andreia Miranda, a victim witness advocate with the Bristol County District Attorney's Office, to obtain replica medals from the U.S Department of Defense and contact Sylvia's family.

“I was like, 'How do I make right what was clearly an unfortunate situation?” said Costa, who will be flying to Florida today to personally deliver the medals to Sylvia's son, Fred Sylvia, and his family.

“This is just too personal for me to ship them down by mail,” Costa said. “I think it needs that personal touch.”

Reached at his home in Vero Beach, Florida, Fred Sylvia said he was “shocked” when Costa called him to report that his father's medals had arrived.

“Obviously, he didn't have to do it. He did this all on his own time,” said Sylvia, who added that he has notified his community newspaper about the story, and that he is trying to arrange for the medals to be presented at a local park dedicated to veterans.

“I wanted more than (Costa) just walking into our home, handing the medals to us and then leaving” Sylvia said. “I felt he needs the proper appreciation for doing this.”

Costa's work on behalf of the Sylvia family has also caught the attention of his superiors, including Edward Dolan, the commissioner of the Massachusetts Probation Service, who said Costa's efforts to return the medals are “truly commendable.”

“Assistant Chief Costa has gone above and beyond in turning a bad situation into one that will bring joy to the family of a man who valiantly served our country,” Dolan said. “We are especially proud of Assistant Chief Costa, a veteran himself, and consider him a shining example of the Massachusetts Probation Service and the work we perform each day to help keep communities and the individuals who reside in them safe as well as assist victims and survivors of crimes.”

Speaking with Sylvia's family and looking over his U.S. Army paperwork, Costa said he was struck by how much pride the late veteran had in his wartime military service.

“He earned those medals,” Costa said.

According to Sylvia's DD-214 – a document the military issues when someone is discharged from the military – Sylvia was 26 when he joined the U.S. Army on July 25, 1944. He entered the military as an infantryman and was assigned to Company I of the 329th Infantry Regiment. In January 1945, he shipped overseas and was attached to the 83rd Infantry Division during combat.

Known then as Cpl. Sylvia, the New Bedford native served more than a year in Europe during World War II. According to his discharge paperwork, Sylvia fought with U.S. Army General George Patton's forces as they swept across Europe, seeing combat in the Rhineland, Central Europe and the Ardennes, the setting for the well-known Battle of the Bulge, which stretched from Dec. 16, 1944 to Jan. 25, 1945 during one of the coldest European winters on record.

“He didn't talk much about his service, but he talked about the extreme cold that winter,” Fred Sylvia said. “He said he saw some horrific things and talked about sleeping on the ground in one of coldest winters in Europe at that time.”

After the war, Sylvia returned home and was honorably discharged from the U.S. Army. For his service, he received the Combat Infantry Badge, as well as the Good Conduct Medal, the Bronze Star Medal, the Victory Medal and the European-African-Middle Eastern Theater Campaign Ribbon. He was discharged from the military at Fort Devens in Massachusetts, and worked in civilian life as an engine lathe operator.

Sylvia, who was 92 when he died, was also a Mason, and had other belongings that were stolen, including a medallion, silver cuff links and a bracelet.

“We don't know what became of the medals, whether they were discarded or not, but they were never retrieved,” said Costa, who added that he is looking forward to meeting Sylvia's family and talking about his military service.

“I'm definitely excited about it,” Costa said. “Hopefully, this will all have a happy ending.”

Fred Sylvia said he may place the medals with his father's dog tags and the folded American flag the family received at the funeral. He said that would not have been possible if not for a helpful probation officer in Fall River.