The Yakama Warriors Association formed in 1991 to provide military honors at funerals on the reservation. Since its inception, the veterans group has assisted at funerals across the region, on and off the reservation, for all walks of servicemen 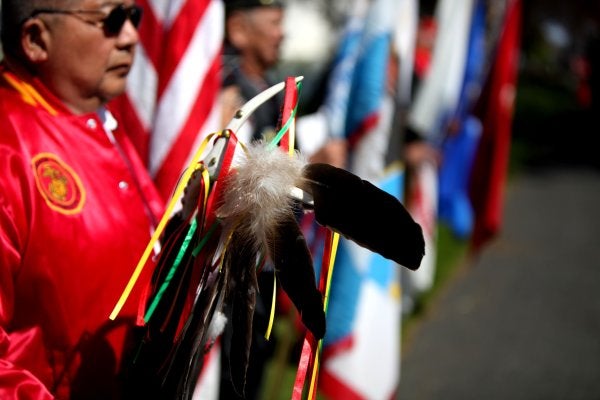 On a cold February afternoon, a handful of pallbearers pulled the casket of Frankie Reye Alexander from a hearse and placed it over his final resting place at Tahoma Cemetery.

A traditional song, “Soldier Boy,” echoed from a pair of Yakamas who sang to the beat of a deerskin drum.

About 20 members of the Yakama Warriors Association stood at attention under a gray sky as they gave Alexander his final salute. Seven Warriors raised their rifles and fired three shots. Other Warriors formed a color guard, and one handed a folded United States flag to a member of Alexander's family.

Alexander, a Yakama, faced combat in Vietnam and later became a Seattle police officer before returning to the Yakama reservation. He died Jan. 12 at age 73.

The Warriors Association formed in 1991 to provide military honors at funerals on the reservation. Since its inception, the veterans group has assisted at funerals across the region, on and off the reservation, for all walks of servicemen.

And so it was at Alexander's funeral.

A stillness fell over the cemetery as family and friends — about 100 in all — embraced one another as Alexander's coffin was lowered into the ground. Tears spilled from the eyes of a young girl.

“Having him honored by other veterans and Native American veterans was an honor for our family,” his brother, Anthony Robbins, said afterward.

Yakamas have served in every modern major conflict involving U.S. forces, but getting military services on the reservation long had been difficult, especially military honors at funerals, said Max Corpuz, a founding member of the Warriors Association.

So a handful of Yakama veterans took it upon themselves to provide those services.

“It was kind of difficult to get the VFW or the American Legion to do a ceremony,” Corpuz said. “So a bunch of us got together and said 'Why can't we do it?'”

The group grew to about 18 members, established its black and white uniform with a military service cap, and received authorization from the U.S. Department of Defense to organize and become a legitimate veterans group.

“By getting authorized, we were able to get rifles and other stuff to conduct ceremonies,” Corpuz said. “After that, It just kind of took hold and we were taking care of all the military funerals on the reservation. And after we got going, we started getting calls from all over the place.”

“We had a group from just about every era,” he said.

The group later opened membership to non-Natives — not just to bolster its ranks, but to bring services wherever they were needed, Corpuz said.

Membership now numbers more than 150, including one in Australia, Corpuz said.

The group has its office at Fort and Buster roads, just west of Toppenish on the reservation. There, Wood and Corpuz take calls requesting the group's presence at countless events and funerals.

“It's getting out of hand, really,” Corpuz said of the volume of requests. “A lot of times we've got to cancel because we've got other commitments.”

Harvey Games, a U.S. Marine Corps veteran and Yakama Warriors Association member, reviews art at the opening of the 50th commemoration of the Vietnam War art display in the Air Force Art Gallery located in the Pentagon, Washington, D.C., May 26, 2016.

Vic Wood, who served in Vietnam, said he didn't want any part of any veterans groups when he returned stateside.

Vietnam veterans weren't too welcome at most military fraternities.

But in 1995, Wood was helping his father provide stock for a rodeo on the reservation when he was approached by some Yakama Warriors who knew he had served in the Navy.

Looking back, Wood said it's been worth it.

He's traveled across the county, met new people and made lifelong friends on funeral details, participating at memorials and simply talking to young veterans coming home from war.

“I think it's the camaraderie with other vets — that brotherhood,” he said. “Finishing a task just feels good.”

The group is frequently invited to schools throughout the region to teach about service flags, help for color guards and share their experiences. Member Mary Diavolikis said she's touched when students salute veterans or place their hands over their hearts in honor of service flags.

Wood said he tells students not to be afraid to ask veterans about the service pins they wear on their hats and jackets.

“Because each pin has a story behind it,” he said.

Wood recalled a student who once marveled at a pin of the A6 Intruder fighter aircraft on his service cap.

“I took it off and give it to him — man, you'd a thought I gave him a million dollars,” Wood said.

In addition to military details and visiting schools, the group has been invited to prominent military gatherings, including a parade in honor of Ira Hayes in Sacaton, Ariz. A Pima Native American and Marine, Hayes was one of six flag-raisers on Iwo Jima during World War II. The image was memorialized in an iconic Associated Press photograph.

In 2005, Louis Cloud, a Yakama and highly decorated World War II hero, was invited to lead the parade honoring Hayes. Cloud died in 2007

On Memorial Day in 2016, the group was invited to place a wreath at the Tomb of the Unknown Soldier at Arlington National Cemetery in conjunction with President Barack Obama's invocation.

The group even got to meet Frank Buckles, the last living World War I veteran, who died in February 2011.

“We shared a meal with him,” Wood said. “I just think it's overwhelming, the places we're going, the people we're meeting. None of that would have happened if I didn't jump aboard.”

SEE ALSO: A Vietnam Veteran Reflects On A Coma-Induced Adventure To The Brink Of Death