Fort Sam Houston is one of three primary locations that comprise Joint Base San Antonio. The Air Force is the... 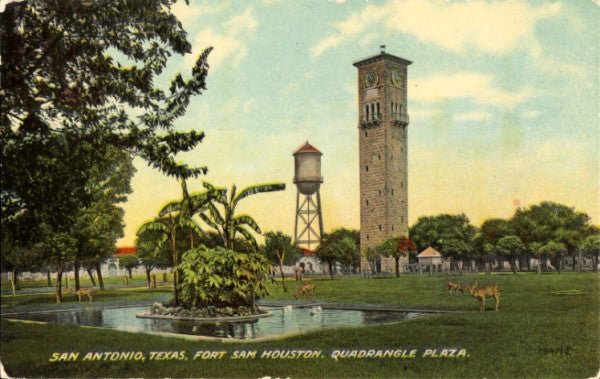 WHERE IS FORT SAM HOUSTON

Located in South Central Texas, in Bexar (pronounced Bear) county, San Antonio sits just south of the Texas Hill Country, 80 miles from the Texas state capital city of Austin. The two are relatively connected by a series of small towns and it is expected they will eventually join as a Metroplex. Traveling to Houston or Dallas is more of a journey, trips logging 3 hours and 4 hours respectively. Coastal destinations range from 2 hours to family-friendly Corpus Christi to almost 5 hours to get to popular college spring break, destination, South Padre Island.

San Antonio is the seventh most populated city in the United States and the second in Texas. Additionally, it was the fastest growing of the top 10 largest cities in the U.S. from 2000 to 2010. It is also home to six Fortune 500 companies and the South Texas Medical Center, the only medical research and care provider in the South Texas region.

There are many options for housing around Joint Base San Antonio. Fort Sam Houston Housing on-post is privatized and managed by Lincoln Military Housing. There are 925 homes in 8 housing neighborhoods available. These duplexes, quadplexes, and detached houses feature central air, a refrigerator, stove, and dishwasher. Neighborhood amenities include community centers and outdoor recreation areas. There is an elementary, middle, and high school on post that are a part of the Fort Sam Houston ISD (Independent School District). Bus transportation is not provided across district lines, but is available to students who reside on post and live more than a mile from the nearest school available on post. Check out advice and reviews from fellow military families about housing on post.

Fort Sam is in the center of town and can be reached easily from many different areas. Nearby towns to check out include Schertz, Cibolo, China Grove, La Vernia, New Braunfels, and Universal City. There are more vehicles than ever on the roads surrounding San Antonio but depending on what you are used to, it may not seem all that bad. The San Antonio urban area ranked 33rd in the nation for time wasted during peak commute times. The good news is when there are major delays; drivers have decent alternative routes compared with other cities.

You can read what other military families have to say about local San Antonio neighborhoods at PCSgrades.com.

The median home cost in the San Antonio area is $172, 400 making it a very attractive place to buy. Developing areas such as Alamo Ranch or Stone Oak are rising in popularity. However, older neighborhoods like Cibolo, Schertz, or Universal City have a lot to offer at a reasonable price. The cost of living in San Antonio is 14% lower than the national average with a family of 4 costing roughly $72,000 a year to support.

You can expect mild winters and scorching summers in this part of Texas. While tornadoes and wildfires are rare, the biggest threat of severe weather in Alamo City is flooding. When it rains hard in San Antonio, downtown and several other areas are known to flood, making commutes potentially treacherous. The coldest month is January with an overnight average temperature of 38°F. The highest temps occur in August with daily temperatures into the 100’s.

San Antonio is foodie heaven. Home to some of the best Mexican food and Tex-Mex in the United States, locals consider themselves experts on Mexican Faire, especially the taco. In San Antonio, there are three times eating tacos is not only acceptable but celebrated; breakfast, lunch, and dinner. San Antonio is the home of the breakfast taco and they are available all over town at different price points, for the best tacos head to the west side or the south side. Austin has claimed to have the best breakfast tacos but they are wrong.

Tired of Tacos? Is that a thing? If so San Antonio has plenty more to offer from unique Southtown Asian Fusion restaurants to Food Truck Faire. Instead, try local favorites like Kimura, Hot Joy, Southerleigh, or Green.

San Antonio is brimming with activities for families and couples and the downtown area is a great place to start soaking in some of the local flavors.

Perhaps San Antonio’s most famous attraction, the Alamo is the home of the famous 1836 battle and becomes a living history with special demonstrations and events all year long. This beautiful 300-year-old former Spanish mission turned fortress is open year-round and is free everyone to visit. Missions National Historical Park is a chain of four Spanish colonial missions—Concepción, San José, San Juan, and Espada-feature eight miles of paved cycling and walking path. Canoes and kayaks can be paddled along sections of the Mission Reach. The visitor center is located at Mission San José.

Located on the northern side of downtown, San Pedro Springs is the second oldest municipal parks in the nation and is truly an urban oasis. There are 46 acres featuring walking/hiking paths and a pool for summer swimming.

Hemisphere park is a sprawling park in the middle of downtown housing the Tower of Americas and The Institute of Texan Cultures. Not only does this park have a big, impressive, playground, it also hosts some of the best festivals and celebrations San Antonio such as Fiesta and Luminaria ( a yearly art and light festival).

Brackenridge Park More than 340 acres of woodland, trails and a historic par-72 golf course are sure to please outdoor lovers! Your little ones will love riding a miniature train around the park. Here you will also find the San Antonio Zoo, and Japanese Tea Gardens.

Hardberger Park on Blanco Road has 1.8 acres for dogs, including separate areas for small and large dogs and a two-story doghouse.

The west side of Hardberger Park on NW Military Highway features an enclosed 1.5-acre area for dogs, divided into sections for large dogs and small dogs.

San Antonio is home to some fabulous art and history museums. The McNay Art Museum is housed in a 1920’s mansion and offers American and European art from medieval to contemporary. It also has beautiful grounds and a huge event every second Thursday all summer long. The San Antonio Museum of art houses international collections, ancient art, and a contemporary gallery. For the kids, there is the Witte Museum, dedicated to Texas history, prehistoric to modern and featuring the H-E-B Science Treehouse. There is also the excellent new children’s museum the Dosuem. The Dosuem can easily be an all-day adventure, teaching kids about art and science through interactive exhibits and activities.

Just north of San Antonio lies the historic Pearl Brewery. This old can plant is now the hippest destination for San Antonio locals and tourists alike. Foodie heaven, the complex is home to the Culinary Institute of America as well as multiple other local fine food restaurants, Southerleigh, Cured, Supper, Nao, and more.

Each Saturday and Sunday The Pearl hosts an extensive farmers market offering locally sourced produce, cheeses, and more. Live music and the smell of the food trucks permeate the air, and the event is entirely family friendly. You can even bring your leashed dogs. Also frequently available on the weekend and even during the week are free yoga and fitness classes.

No San Antonio list would be complete without its primary tourist destination, The San Antonio River Walk. Construction of the River Walk began in the 1920s but really ramped up during the late ’30s and early 40’s when the Works Progress Administration (WPA), gave the funding needed to expand the network of walkways as a result of Roosevelt’s New Deal.

If you are local, chances are you avoid the River Walk, for the most part, knowing that the best restaurants in downtown exist off the river, such as Schilo’s, a 100-year German Deli, and Mi Tierra, a San Antonio tradition, located in Market Square. However, everyone should experience the River Walk at least once. You can take the family on a boat ride, to the River Center Mall for an IMAX show or head to Howl at the Moon Dueling Piano Bar for a night out.

From sports to live music – Austin has it all! Visit the capitol building and the head out to a University of Texas game – remember to wear orange and yell “Hook ‘Em.” No OU allowed! Sports not your thing? Head downtown to catch one of the hundreds of musical performances occurring on a nightly basis. Austin is, after all, the “Live Music Capital of the World” and host of the famed South by Southwest Festival and Austin City Limits. When it comes to music, Austin rules. When it comes to tacos though – stick to San Antonio (There is a long time feud – San Antonio is winning).

Enjoy some German food in this popular Hill Country destination, which is a little more than an hour away from San Antonio. In addition to the National Museum of the Pacific War, Fredericksburg has plenty of birding, fishing, bicycling and rock climbing opportunities. The Fredericksburg area also boasts the second most visited wine area in the US, second only to the Sonoma wine region in California. Visit some of the over 40 wineries in the Hill Country along the Highway 290, Wine Road outside of Fredericksburg.