Marine Barracks Washington D.C. dates back more than 200 years. It is the oldest active post in the Marine Corps,... 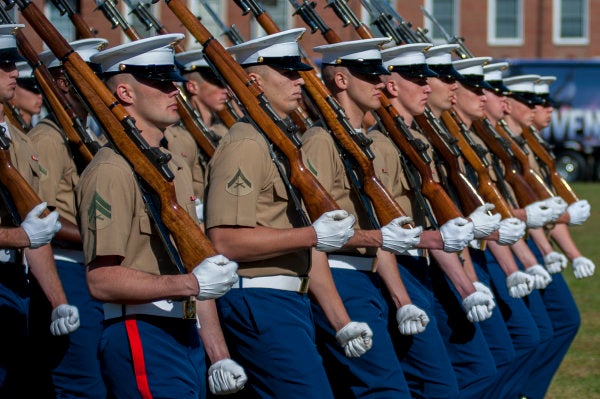 Marine Barracks Washington D.C. dates back more than 200 years. It is the oldest active post in the Marine Corps, supporting both ceremonial and security missions in the nation’s capital. President Thomas Jefferson and Lt. Col. William Ward Burrows, the second Commandant of the Marine Corps, founded the Barracks in 1801.

The Marines assigned to the Barracks participate as funeral escorts for dignitaries and also ceremonial honor guard for state functions. Furthermore, the Marines also provide security for Camp David and the White House.

WHERE ARE THE MARINE BARRACKS WASHINGTON D.C.?

Frequently referred to as “8th & I” or “The Barracks” this historical post is located literally on the corners of 8th & I Streets in southeast Washington D.C.

It hosts the Home of the Commandants, which, along with the Barracks, is a registered national historic landmark.

The selection of the 8th & I site was a matter of personal interest to President Jefferson, who made a horseback tour through Washington with Lt. Col. Burrows in search of a suitable location. They chose the location due to its proximity to the Washington Navy Yard and because it was within easy marching distance of the Capitol.

Until 1901, it was also the location of Marine Corps Headquarters. Marines from the Barracks participated in the defense of Washington in the War of 1812, and served in the Indian Wars of 1826-37, the war with Mexico, the Civil War, and the Spanish American War. Most recently, Marines from the Barracks deployed to Southwest Asia and participated in Operations Desert Shield and Desert Storm.

The Pentagon, Fort Myer, and Reagan National Airport are each less than 5 miles to the east of the Barracks. Also, close by are Joint Base Anacostia Bolling and Fort McNair.

When originally built, the house measured 25 by 32 feet and contained four large rooms and a central hallway on each floor, a kitchen in the basement and servant’s quarters in the attic.

Renovations and additions have expanded the house to 15,000 square feet, including 30 rooms not counting closets or baths. The decor has always been dictated by the personal tastes of each commandant and his family.

The Home of the Commandants was one of the few buildings not burned by the British when they sacked the Capitol in 1814. In 1916, Maj. Gen. George Barnett, the 12th Commandant, approached then-acting secretary of the Navy, Franklin D. Roosevelt, with the idea of having portraits painted of all former Marine Corps Commandants to document the successive changes in uniforms. The idea was approved, and today portraits of all of the commandants hang in the house, with one exception.

The conspicuously missing spot belongs to Lt. Col. Anthony Gale, the fourth Commandant of the Marine Corps. He was the only Commandant ever to be fired from the position and the one with the fewest surviving records. No one knows what he looked like or even knows the location of his final resting place.

Also housed on the Barracks are members of the senior leadership of the Corps stationed locally. Single or geo-baching troops frequently live in high-rise housing just across the street from the Barracks.

On-base family housing is not available at the Barracks. Many families choose to live in nearby Northern Virginia. You can check out local neighborhood reviews written by fellow military families at PCSgrades.com. You can also read base housing reviews for Fort Belvoir, Fort Myer, Joint Base Anacostia Bolling, and Andrews Air Force Base.

Sticker shock is common for those PCSing to the National Capital Region. Your BAH is probably higher than your last duty station, but your cost of living will be higher also. The average sales price for a 3-bedroom house in Fairfax County was $512,500 in December of 2018; this is up nearly 4 % from January of 2017. The housing market in Northern Virginia is currently hugely competitive, and it’s common for sellers to receive multiple bids.

To read the latest on the NOVA Housing Market, click here.

The Barracks does not feature any of the regular amenities often found on a military installation. With so many nearby, it is not really a problem. Bolling, Fort Myer/Henderson Hall, Fort Belvoir, and Andrews AFB all have commissaries, MWR, ITT, Theatres, and Exchanges. Fort Belvoir and Walter Reed are home to major hospitals and specialty care.

There are no schools located at the Marine Barracks but there are many different school districts available in the Washington D.C. area to include public charter schools, private schools, and homeschooling options depending on where you find housing. The Family Readiness Officer at 202-433-4881 can answer specific questions about the area. Local public school districts in northern Virginia are also very highly rated.

There are four distinct seasons in the mid-Atlantic region to include Washington D.C. and the surrounding areas. Winters are relatively mild with an average snowfall of 15.4 inches, most of it falling in January and February. Springtime features the blooming of the cherry blossoms along the Tidal Basin. People come from all over the world to view these delicate flowering trees which only bloom for a couple of weeks during the year. Summers can be as steamy as the politics with temperatures rising above 100 on some days in July and August. The mild temps tend to stick around in September and October, and by Halloween, the fall foliage is in its full splendor with the vivid colors of autumn.

What the Barracks does offer is a lot of history. The Barracks has been home to the United States Marine Band for more than 200 years. President John Adams began a tradition of having the band play at many White House functions, so much so, the Marine Band became known as the “President’s Own.”

John Philip Sousa, as director of the Marine Band, wrote many of his immortal marches during his time at the Barracks.

The Evening Parades at the Barracks are legendary and it’s a great activity when out-of-town guests visit. The parades are conducted on Fridays beginning in May and running through August. “The President’s Own” United States Marine Band, “The Commandant’s Own” United States Marine Drum and Bugle Corps, the Marine Corps Color Guard, the Marine Corps Silent Drill Platoon, Ceremonial Marchers, and Cpl. Chesty XV, the official mascot of Marine Barracks Washington all perform during the hour and fifteen minute event. There is no charge for admission, but reservations are strongly recommended. You will long remember this night of musical performance and precision marching!

You do not have to go far to enjoy the area attractions in and around Washington D.C.

Our Nation’s Capital is home to the White House, the Lincoln Memorial, the Washington Monument and the National Air & Space Museum.

The Pentagon 9/11 memorial in northern Virginia is not to be missed. It is usually one of the first stops for military families when they arrive on orders.

Lewes/Rehoboth Beach, Delaware – 121 miles; 2.5-hour drive – What can we say? It’s the beach! Bring your lotion and your bathing suit and enjoy!

Chincoteague Island, Virginia – 170 miles; 3.5 hour-drive – Do not miss watching the ponies at the Chincoteague National Wildlife Refuge on the quieter side of the Eastern Shore!

NOT THE USUAL DUTY STATION

An assignment to the Marine Barracks Washington D.C. can seem a bit intimidating with its’ downtown location, and lack of many of the usual base amenities and support found at other installations. But you will find the other local military installations provide what the Barracks does not to include a military friendly community, military spouse clubs, and medical care.