If You’re In The Military, You Can Now Carry A Gun In Oklahoma At 18

A new piece of legislationsigned into law by Oklahoma Gov. Mary Fallin extends eligibility for handgun licenses to veterans and … Continued 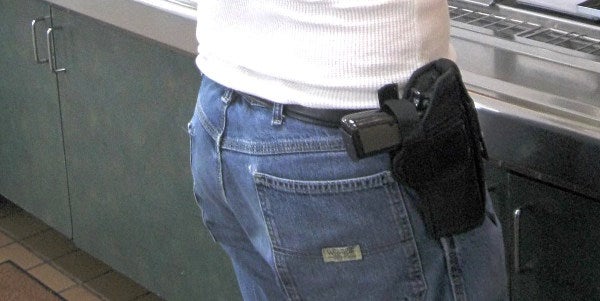 A new piece of legislationsigned into law by Oklahoma Gov. Mary Fallin extends eligibility for handgun licenses to veterans and members of the armed forces who are under the age of 21.

Pursuant to a 2012 law also signed by Fallin, a handgun license in Oklahoma “shall authorize a person to carry concealed or unconcealed.”

The more recent update, the “Handgun Carry Military Exemption Act,” allows residents who are currently serving in the military, Guard, or Reserves, or who were honorably discharged from the military to obtain a handgun license, if they are between the ages of 18 and 21. Previous Oklahoma state law required residents to be 21 years of age in order to receive such a license, with no exceptions. Applicants must still take a safety class with the type of pistol to be carried, and pay an application fee.

The legislature and governor’s mansion in Oklahoma are both firmly in Republican control, but it doesn’t seem that there was any opposition to the bill. It ultimately passed the Oklahoma state House99-0, and passed the state Senate46-0.