In the National Football League, the left tackle position is one of the most important on the field. The average … Continued 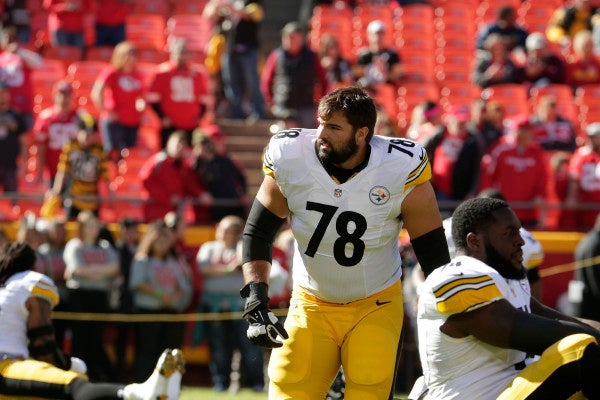 In the National Football League, the left tackle position is one of the most important on the field. The average quarterback, like most people, is right handed, and so his back is naturally turned to the left side of the field. Left tackles are responsible for protecting the quarterback’s blindside. Good quarterbacks feel pressure from a pass rush, and have a rapid release to get the ball out before they go down, but the results of not seeing a hit coming can be disastrous.

For that reason, a player who can adequately protect a quarterback’s blindside is heavily valued. A 2015 NFL.com report called the position the third-most important in the game. Notably, it ranked behind only quarterback and pass rusher.

But for all its importance, it is not a high-profile job.

For the Pittsburgh Steelers, as they make their playoff run, the critical left-tackle position is manned by a combat-decorated Army veteran.

Alejandro Villanueva’s long road to professional football took him from the U.S. Military Academy at West Point, New York, and through three deployments to Afghanistan, including two with one of the most elite units in the U.S. Army. Now, he plays one of the hardest, thankless, and most important positions in football for one of the NFL’s best teams.

Villanueva was born on a Navy base in Meridian, Mississippi, to Spanish nationals. His father was an officer in the Spanish Navy who worked closely with NATO.

Standing at 6-feet, 9-inches tall, he became the tallest player in the history of West Point football, a freak athlete and respected leader who played three different positions on both sides of the ball.

Villanueva started his college career as a defensive lineman before switching to left tackle. By his senior year, he was a wide receiver, the offensive captain, and the lead receiver at West Point. In 2009, his last year at the academy, he snagged five touchdowns amid 34 receptions for 522 yards.

He went undrafted in the 2010 NFL draft and went unsigned after a tryout with the Cincinnati Bengals.

Once in the Army, as a 23-year-old lieutenant, Villanueva earned his Bronze Star medal with a Valor device for heroism in combat in Kandahar province, Afghanistan, while assigned to 2nd Battalion, 87th Infantry Regiment, 3rd Brigade Combat Team, 10th Mountain Division. After his team was ambushed by the Taliban, Villanueva helped evacuate three wounded soldiers, one of whom, Pfc. Jesse Dietrich, later died from his wounds. Villanueva carried one of the wounded men on his shoulders during the firefight.

“As the platoon leader, I feel responsible for everything my platoon does or fails to do,” Villanueva later told ESPN. “I failed to keep Jesse Dietrich safe, and you know, it was just tough. … I keep thinking of other ways I would have done it, but it was a very tough mission and the enemy beat us that day. It was just a really bad night.”

When he got out of the Army in 2014, he tried one last time to make it in professional football, going to training camp with the Philadelphia Eagles as a defensive lineman. He was 277 pounds, and the Eagles coaches had dreams of making him a pass rusher in a 3-4 scheme. He was a fan favorite, but was released in the first round of roster cuts at the end of the summer.

Villanueva was quickly signed to the Steelers, who had designs on making him a left tackle again.

Steelers coach Mike Tomlin offered Villanueva something that he never had before: “football stability,” the chance to take his time and learn his position.

The Steelers put him on the practice squad, where he could learn the position at the pro-level and gain weight.

“That was as good of a chance as I'd get,” Villanueva told ESPN. “For that, I was extremely thankful.”

By the same time next season, Villanueva had added 90 pounds and learned the position.

He made the roster and he never looked back. Villanueva started at tackle in his first NFL game in October 2015 amid an injury and started the remaining 12 games of the season.

He was named the starting left tackle for the 2016 season and started every game. Now, with the rest of the Steelers, they’re hoping a Super Bowl run is next.