North Korea Could Have 100 Nuclear Warheads By 2020, Report Says

By 2020, North Korea could possess as many as 100 nuclear warheads.

That's the startling conclusion of a January 2019 report from the RAND Corporation, a California think tank with close ties to the U.S. military.

"North Korean provocations and threats have created an unstable environment on the Korean Peninsula," RAND's report explains. "North Korea's ongoing development of nuclear weapons and ballistic missiles increases the possibility of their use against regional states, furthering instability across the region and beyond, thus affecting vital U.S. interests."

To deliver its nukes, the Democratic People's Republic of Korea, as the regime in Pyongyang calls itself, is building up a large stockpile of rockets of varying ranges.

"The DPRK's growing arsenal will provide its regime with multiple options to employ its nuclear weapons," the RAND report warns. 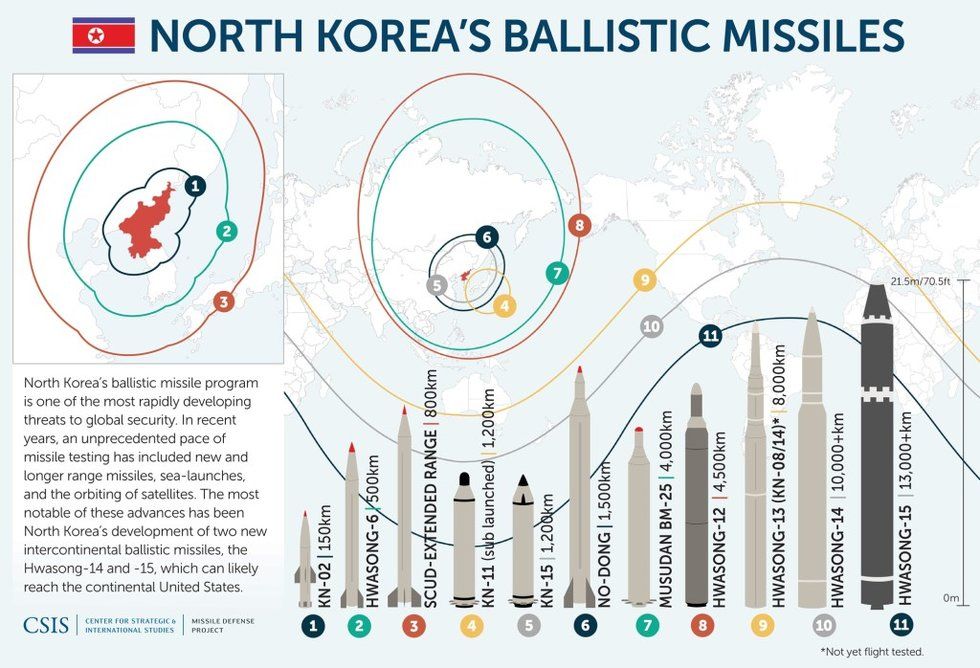 North Korea has invested heavily in the development of increasingly longer range ballistic missiles, and the miniaturization of its nascent nuclear weapons stockpileCSIS Missile Defense Project

North Korea possesses more than 650 short- and medium-range ballistic missiles capable of hitting cities throughout South Korea, Japan and eastern China," the think tank noted. "If successfully mated with nuclear weapons, these missiles will allow the DPRK to hold military bases and population centers in northeast Asia at risk."

And if Pyongyang succeeds in developing a long-range rocket, it could also target Guam, Hawaii, Alaska and the northwestern continental United States.

With an arsenal of up to 100 nuclear warheads and a wide range of rockets to deliver them, Pyongyang could pursue a nuclear-war strategy that might actually work, RAND explained in its report.

"The DPRK could explode one or more early in a conflict as a warning, while reserving a salvo of 20 to 60 weapons to attack military targets like troop concentrations, air bases and seaports," the think tank posited."This would leave enough for a final salvo of 30 to 40 weapons to threaten attacks against cities in South Korea, Japan, China, Russia and—if they develop the delivery means—targets in the United States."

For its report, RAND war-gamed a North Korean attack on Seoul's wealthy Gangnam district. "Roughly half the size of Manhattan, Gangnam—a district of Seoul—is a major economic center and home to many large companies, such as Google and IBM. With some of the most expensive real estate in the country, the district is also considered the most affluent in all of South Korea. Consequences of a single DPRK nuclear attack on Gangnam would be severe."

If Pyongyang struck Gangnam with a 100-kiloton airburst nuke, 400,000 people instantly might die. Another million could suffer injuries.

Seoul lies just 35 miles from the demilitarized zone between the DPRK and the Republic of Korea in the south. Any number of existing missiles could deliver an atomic warhead to such a close target. North Korea's longest-range operational missile, the Musudan, can travel 1,900 miles and deliver a nuke to Japan, China and Russia.

The Hwasong series of rockets that the DPRK is developing can travel as far as 6,200 miles and threaten the U.S. mainland.

North Korea on Nov. 28 conducted the maiden launch of the Hwasong 15(KCNA/Associated Press)

RAND's report recommends a comprehensive response to the North Korean threat. "In addition to multilateral diplomatic measures to halt the DPRK's nuclear progress, the United States and its allies in the region—as well as China—must take steps to reduce the risks posed by the North's nuclear program.

"These steps range from creative U.S. operational concepts to fight, move and sustain in new ways; U.S.-ROK work on crisis management procedures and mechanisms; trilateral coordination with Seoul and Tokyo on ways to mitigate the threat; and an accelerating dialogue with China on responses to various crisis scenarios."

U.S. president Donald Trump's June 2018 meeting with North Korean leader Kim Jong Un in Singapore didn't result in any meaningful progress toward disarmament. Shortly after the summit, Trump falsely declared that the DPRK was "no longer a nuclear threat."

As of early 2019, the Trump administration reportedly was scouting potential locations for a second Trump-Kim summit.