President Trump’s speech on Monday to the soldiers at Fort Myer about his Afghan policy did contain a few good... 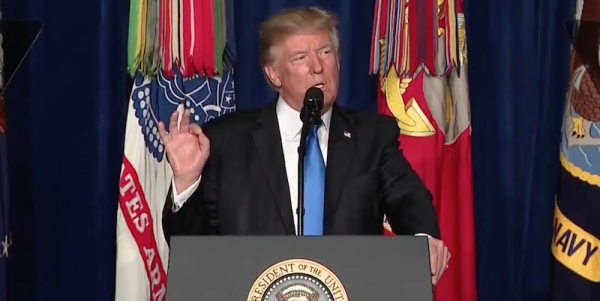 President Trump’s speech on Monday to the soldiers at Fort Myer about his Afghan policy did contain a few good points. But it also raised questions about his overall policy and strategy.

On the plus side, the president backed away from his campaign promise to precipitously withdraw from the conflict, and did not support using private contractors to fight the war, as some of his aides had urged.

But the failings in Trump’s new policy and strategy can be placed in at least ten major categories.

First, he said that America’s goal was to achieve victory, but he never said what that would entail. Would it mean that the Taliban and Al Qaeda and ISIS surrender? Would it mean giving the Taliban a role in government—and under what terms?

Second, while he said he would not set a deadline for withdrawal, the president did not say why adding a few thousand more troops—which it looks like he might—would accomplish something that the 140,000 troops President Obama placed in Afghanistan in 2010 and 2011 did not.

Third, President Trump said he would support the Afghanistan government. But he did not say what he would do if the Afghan government continues to lose the support of its people because of corruption, as it has over the past sixteen years.

Fourth, Trump’s claim that America cannot withdraw from Afghanistan, lest he repeat President Obama’s mistake in Iraq, is misleading. Obama had to withdraw all American forces before the end of 2011 because of an agreement President Bush had made in 2008. But the real mistake Bush made was when he invaded Iraq under false pretenses. In so doing, it took resources and attention away from Afghanistan, thus allowing the Taliban to regroup. Moreover, the Iraq invasion led to the creation of Al Qaeda in Iraq, which subsequently morphed into ISIS, which marched into all the Sunni areas of Iraq with almost no resistance because the U.S.-installed prime minister, Nouri al-Maliki, had discriminated against them.

Fifth, sending additional U.S. troops not only would not make the situation better, but might make it worse. As Aaron O’Connell has pointed out, the country is home to not one but five conflicts: a centuries-long power struggle between the Pashtun and all other ethnic communities; a conflict between the Durrani and Ghilzai Pashtun tribes; a culture war between progressive cosmopolitans in the cities and religious conservatives in the countryside; a cold war between India and Pakistan; and tensions between the Pakistani and Afghan Taliban.

Seventh, Trump’s claim that, if U.S. forces leave, Afghanistan will once again become a haven for terrorist groups like Al Qaeda and ISIS, which will threaten the U.S. homeland, is not correct. It ignores the fact that the Taliban does not support these groups, and that the United States cannot invade and occupy every country that is home to a terrorist group. If Al Qaeda, ISIS or any other terror group poses a threat to America, Washington can use airpower or cruise missiles against them, as it has done in Yemen, rather than sending in occupying forces.

Eighth, the president ignores the fact that if America undertakes a full withdrawal, it will—as political scientist Barry Posen points out—force the countries in the region to step up. Russia, Iran, Pakistan, India and China do not want to see an Afghanistan that will destabilize the region. In fact, in 2001, the Iranians helped destroy the Taliban and Al Qaeda in Afghanistan by providing the United States with intelligence and convincing their Northern Alliance allies to support us. Finally, regional mechanisms like the Quadrilateral Coordination nation group already exist. This group consists of the United States, China, Pakistan and Afghanistan.

Ninth, Trump wants to use all the tools in the national-security arsenal to achieve his objectives. But his proposed FY2018 budget will make that impossible, because of the draconian cuts he made in the budgets of the State Department and USAID.

Tenth, the president will give the military commanders on the ground more latitude on how to use deadly force, something he has already done in Syria and Yemen. While this may improve conditions on a battlefield temporarily, it will most likely lead to more innocent civilian casualties, as has happened in Yemen and Syria, thus creating more terrorists.

Based on the weaknesses contained in the president’s policy, it is very unlikely that he will achieve his goals anytime in the near future.

Lawrence J. Korb is senior fellow at the Center for American Progress and was the Assistant Secretary of Defense for Manpower, Reserve Affairs, Installations and Logistics from 1981-1985.