It’s 2017. The Military Still Requires Officers To Have College Degrees. Why? 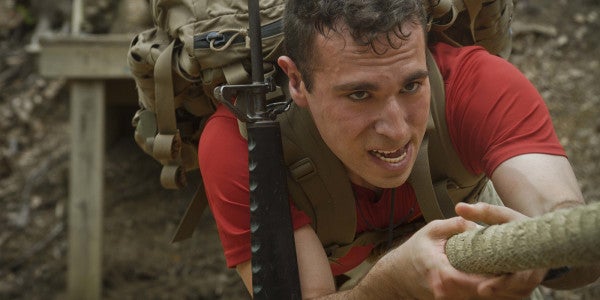 In 1940, fewer than one in 20 Americans had four years of college. By 2000, it was one in four. A college degree was once widely seen as proof of membership in the nation’s intellectual (and financial, gender, and racial) elite. Now, being a college graduate just means someone is able to pay tuition and wake up in time for at least 50% of their classes. And still, with very few exceptions, we require degrees of our commissioned officers.

A guy can come off the street with a degree from the University of Phoenix (acceptance rate: 100%) and be closer to getting a commission than an experienced NCO with outstanding evaluations. Officer selection boards might do just as well if they required a note from an applicant’s mom saying “He’s probably not a complete dumbass.”

Academic degrees aren’t great markers of leadership quality… and requiring degrees shuts out a lot of potential officers with a talent for the work. It’s time we changed that.

How we got here

In the early days of American history, the U.S. officers’ corps was a chaotic mix of service academy alumni, direct commissions, and the socially prominent who could afford to raise units by themselves. For a small nation with a tiny standing army, this was an adequate system.

Rapid economic development and world wars shifted the country’s security priorities. When the military moved towards being a large, professionalized force, it also had to find those better suited for leading and managing others.

American culture had long equated a college degree with the sort of polish that signaled real management material. Higher education seemed as good a marker of officer potential as anything else. It was better than picking officers based on their social standing — it certainly opened up the commissioned ranks to more Americans — but the logic that once made this prerequisite reasonable no longer holds.

Today, even experienced noncommissioned officers with unblemished records have to get check-the-box degrees in order to be eligible for most commissioning programs. Of course, not every good NCO would make a good officer, and screening of applicants should still matter. But if, after years of observation and training, we can’t figure out which enlisted would make good officers without the help of adjunct faculty at some third-tier university sitting outside a base’s gate — or even worse, online — then our whole system has big problems.

The Marine Corps’ Meritorious Commissioning Program was a good example of a better way to attack this. It commissioned well-qualified enlisted as officers after they completed Officer Candidates School, then it gave them a deadline for finishing a degree while on active duty as an officer. It was a pretty efficient model — but the Corps got rid of it, because not enough people were applying due to cannibalization from other commissioning programs. It makes sense. Between a scholarship to go party at a state school and attending night school after a long day managing a platoon and all its problems, what would you choose?

Here’s where the oohrah/hooah crowds are going to say that every officer needs to be enlisted first. More mustangs in the officer corps would be great. That’s only one piece of the puzzle, though. The military needs to up its game across the officer selection process.

One alternative model is the British Army’s 44-week program at the Royal Military Academy at Sandhurst. It is the service’s primary commissioning source taking both prior enlisted and civilian accessions.

The key feature of the British system is allowing the flexibility of selecting both college graduates and non-graduates. 80% of their entrants have degrees, but they allow for qualified applicants who don’t, and 44 weeks is sufficient time to train and indoctrinate qualified candidates. If the U.S. adopted a similar model, say, on the campuses of West Point and the other service academies, it might keep its other commissioning sources, but those could be considerably streamlined.

What is college for, anyway?

That may sound radical. But in a nation where many of our most successful cultural and industrial leaders are college dropouts like Bill Gates and Steve Jobs, why are we sticking with a college degree as the primary prerequisite for military leadership positions?

If college is supposed to teach technical knowledge, why doesn’t the military take a more prescriptive stance on what majors are acceptable? While the Navy and Air Force steer their ROTC and academy students towards technical degrees, there’s little attempt to make them match the actual fields they’ll work in once commissioned. The Army and Marines take just about any degree not written in crayon.

And if college’s main added value is that it develops mature adults — a pretty debatable proposition — then what makes it better than prior-enlisted time, or even management experience in the civilian workforce?

Today, more than ever, some of the most talented people in emerging security fields like cyber and unmanned systems have little or no formal training. Is the military really going to tell someone who’s building and selling her own mobile apps that she has to do four years of college to be ready for life as an information warfare officer? The services need to set standards for leadership, intelligence, and physical fitness… and then look for the most accomplished people who meet those standards, both in and out of college.

All this is not to say that education isn’t important. But it’s a means to an end, not the end itself. Completion of a bachelor’s degree is generally taken to signify higher-level thinking skills. Those skills are necessary to be a good officer. But a college degree isn’t the only way to prove a person has them. And having a degree isn’t even close to guaranteeing one possesses those skills.

If the military casts a wider net for talent, then runs candidates through a longer, more intense screening and training program, it will be a huge step closer to a more agile, more effective 21st century workforce.