50 year ago, I vandalized the ROTC offices at Northwestern. Here’s why (and how) I’m now atoning

"My error of judgment regarding ROTC years ago was to see only the very short term and miss the longer term value of the institution, both as a contribution to democratic values and in making a smarter military" 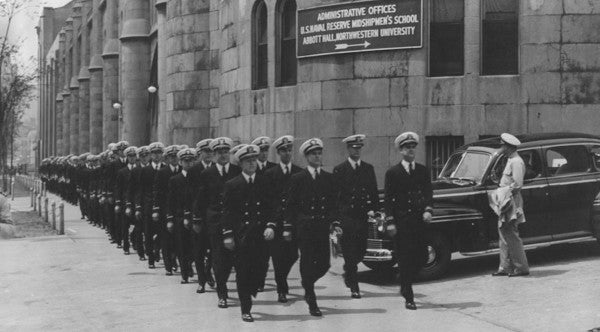 On Friday, I will attend the solemn ceremony at Northwestern University in which Naval Reserve Officer Training Corps students will take the oath to become members of the United States Navy and Marine Corps. As both a faculty member and graduate of Northwestern, I try to attend each year as these outstanding young people commit themselves to a life fraught with potential danger in service to our country. They have earned and deserve our solidarity and support.

Almost 50 years ago, as a Northwestern undergraduate, I was arrested for damaging the NROTC offices during an anti-Vietnam War demonstration. At the time, many of us believed that NROTC contributed to the war effort, and therefore had to be removed from campus.

As a leftist then and now, I have no qualms about admitting to my errors, one of which was a wholesale misunderstanding of the importance of the ROTC program — Army, Navy and Marine Corps and Air Force — on college campuses.

A few years ago, retired Gen. Karl Eikenberry spoke to a full house at Northwestern and asked how many of the students had parents or siblings who had served in the military. Few stood up. Then he asked the rest of us, ranging widely in age. As the audience began to stand, we could see that the older people — folks around my age — were rising almost to a person. We were the children of veterans of World War II and the Korean War, and the generation that might have served in Vietnam. Those were all wars in which young men were subject to conscription. There may not have been universal service, but the military ranks included every segment of the population.

Today we have no draft. Instead, we have an all-volunteer military, few in number, high in technology. On the one hand, perhaps such a military is appropriate to the missions of today. But as Gen. Eikenberry pointed out, our fighting forces are decidedly cut off from our general population. Gone are the yellow ribbons on every block. I think a lot about this when I am teaching classes on war and security. Is this the best way for a democracy to field its military?

But with or without a draft, ROTC belongs on college campuses, lest our universities become removed from reality in a way that exacerbates the negatives of the ivory tower mystique. I still believe that the Vietnam War was wrong and immoral, but that was the fault of successive presidential administrations, not the military.

We may well disagree with those in the government who dispatch our military for unwise and self-destructive missions, but blame that on the politicians. And how would a democracy ask its members to commit to a social contract for citizenship without making a military career one option of public service?

In addition to defense, the military also has served as a means of job training, upward mobility and social integration. Can university engagement with young members of the military improve the knowledge level, language skills, travel experience and critical perspectives of those rising leaders? I believe the answer is a resounding yes. My evidence? The midshipmen in my classes.

My error of judgment regarding ROTC years ago was to see only the very short term and miss the longer term value of the institution, both as a contribution to democratic values and in making a smarter military. The war in Vietnam blinded me and many others to a clearer vision of this issue. But, as the saying goes, that was then and this is now.

This year I again will be in the audience, standing to honor our students and fellow alumni as they take the Oath of Service, accept the First Salute (which always brings a tear to my eye, especially when it comes from an aged relative), and as their mothers receive a Blue Star pennant (which dates back to 1917).

When I first started attending this event it was by invitation from a student, and I never thought of it as a moment of reflection of my own past error. Now, I wonder if it is an act of atonement or a gesture of solidarity with my students. Either way, I know that ROTC programs benefit the university, the military and every American.