‘I almost joined the military, but…’ is a weird flex and it’s not OK

Perhaps people feel compelled to come up with these excuses because this country idolizes military service so much. 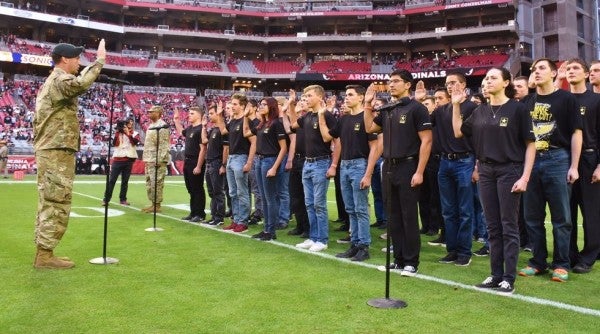 Jacob Wohl, noted conspiracy theorist, internet fraudster, and contender for the youngest person ever to operate a bogus hedge fund, recently promised via Twitter that he would join the military. That is, he'll join the military, “probably the Army,”if President Trump attacks Iran. He even specified that he would enlist within ten days.

The ten day timeframe would itself be laughable if it weren't for the fact that children born on September 11, 2001 are now eligible to enlist and possibly go to Afghanistan. So, if Wohl actually did follow through on his promise, he would conceivably still get to fight after spending a few months in poolee status, boot camp, MOS training, etc.

That said, Wohl will never enlist, war with Iran or no war with Iran. Is the hypothetical war with Iran somehow more worthy than the ones we've been fighting against the Taliban, Iraq, ISIS, Al Qaeda in the Arabian Peninsula, Al Qaeda in Iraq, or Al Qaeda original flavor for nearly two decades, i.e. nearly the whole time Wohl has been alive?

But famous people aren't the only ones in the coulda, woulda, shoulda club. Almost every service member or veteran has encountered this phenomena. Whether in your hometown, a park, or a bar, if you end up in a conversation with a stranger and mention that you are or were in the military, someone will make the remarkable confession that he (and it's almost always a he) almost joined the military…but…

He had a knee injury from being a star athlete in high school. This one is great, because it combines studliness with a complete lack of studliness, as if they cancel each other out. He's saying that the reason he didn't risk an actual combat injury is that a gridiron injury prevented him from doing so. Sure, Uncle Rico. Somehow that debilitating injury didn't keep you from Instagramming that 5K finish last week.

His parents didn't want him to. Really? You would have been a Green Beret or SEAL, but your mommy said no? Just think about that one.

He would have if there was a real war, like World War II or something, as if the military has just been pulling its pud for the past 20 years. When it's obvious that the country will be invaded if you don't serve, or if the draft forces you to serve, then service in itself isn't a differentiator. It's what you're expected to do. It's like saying, “If a criminal ever robbed me, then of course I'd call the police.” Thanks for your civic-mindedness, Captain America.

Just like character is what you do when no one is looking, true service is what one does when your own ass doesn't depend on the outcome.

Perhaps people feel compelled to come up with these excuses because this country idolizes military service so much.

Military service is an important, perhaps even the most important, form of service, but it isn't the only one. Human beings naturally desire validation, and if the only means of getting recognition is to carry a gun, or even to “almost” carry a gun, they will latch onto that.

If you really want to impress me, tell me about the time you were a volunteer firefighter, or even volunteering at a senior center. Hell, talk about the foster dog you took in. That impresses me far more than your fake story about how you almost joined the Marines, except you wanted to go to college. I'm a Marine. I went to college. So did a whole lot of others, not to mention those in the Army, Navy, and Air Force.

Cops are important, firemen are important, and teachers are important. But beyond the obvious service professions, there are so many ways to leave this country and this world better than you found it. Talk about those. And as long as we're at it, we should perhaps spend a small fraction of the time we spend honoring the military at every possible opportunity to salute a few other types of service.

Perhaps then we wouldn't have so many saying they coulda, woulda, shoulda been in the military.