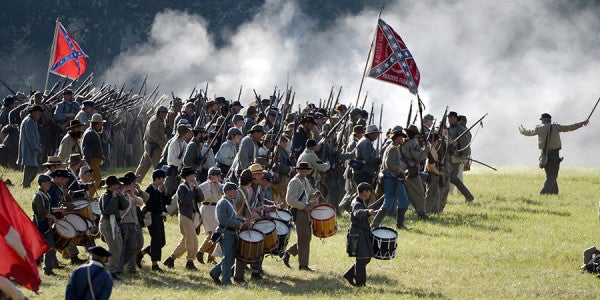 After hearing that white nationalists were gathering in Charlottesville this past weekend to protest the removal of a statue of Robert E. Lee, I was disgusted. The issue hit way too close to home.

Before enlisting in the Marine Corps, I attended a high school in my hometown of Baytown, Texas, named after “the Confederacy’s top general.” I attended a junior college down the street that was named after him as well. Its mascot was a Confederate flag-toting “Rebel.” I never really thought much of it, considering Confederate flags were damn-near ubiquitous in the South. At least 20 other schools in Texas were named after him, and others still that had Rebels as their mascot. This seemed totally ordinary growing up.

It wasn’t until after I studied history in college and grad school on the GI Bill that I realized just how troubling it was to name an American school after him.

RELATED: Banning Confederate-Named Bases Is Only A Solution For Sensitive Snowflakes »

I discussed these feelings with a few people I grew up with and got the typical rebuttals: “The war wasn’t about slavery, it was about state’s rights.” Or “The flag isn’t about racism, it’s about Southern pride.”

Both excuses are bullshit. The Civil War was fought to preserve the institution of slavery, and any pride in that flag is inextricably linked to the band of traitors who rebelled against the United States to keep black human beings in bondage. Here is South Carolina’s declaration of secession, the first among Confederate states; the word “slave” appears 18 times. Lest you think my position is just a product of liberal college brainwashing, here’s a great video of Army Col. Ty Seidule, the head of West Point’s history department, breaking it down for you.

And though paying homage to traitors is pervasive in the South – 10 military bases there are named for former Confederate officers – the problem isn’t exclusive to southern states by any means. Last June, Democratic Rep. Yvette Clark of New York called on the Department of the Army to re-christen two streets on Fort Hamilton in Brooklyn that are named after Lee and fellow traitor Thomas Jonathan “Stonewall” Jackson. The Army denied her request.

Honoring these treasonous men isn’t just inappropriate; it sets a dangerous precedent whose ramifications are being felt today. Not only does keeping “rebel” names on monuments and places normalize the disgusting beliefs they fought for, it fuels hatred and violence that is felt to this day – with no more clear example than the heinous acts that took place in Charlottesville, Virginia, last weekend.

If we continue to honor men who committed treason, or held beliefs that are counter to the ideals that this country has striven to achieve, then we shouldn't be surprised to see the Confederate flag waving, as it did last weekend, next to another sinister symbol of hate: the swastika, an icon of yet another inhuman militant force that the United States has had beat in war.

Our country is by no means perfect. I’ll be the first to admit it – especially as an historian. When the Harlem Hellfighters came home after their storied deployment during World War II, they were met with Jim Crow segregation. When the Navajo Code Talkers did the same, they faced the same oppression their people had already endured for hundreds of years. The same story is true of more than half a million Jews who served honorably during World War II; those who survive today still see Nazi flags being waved – but it’s 2017 now, and this is America. That shit has got to stop.

Countless women and men have served this country honorably in the face of adversity and excelled against insurmountable odds. It should not be controversial to honor them, rather than disloyal citizens willing to take up arms against the country that provided them with the freedom to display their repugnant beliefs.

Furthermore, it is incredibly irresponsible for the U.S. Army to demand its soldiers swear an oath to defend our country’s constitution against all enemies, foreign and domestic, while simultaneously paying homage to the idols of one of its largest domestic threats. To do so at a time when “the FBI and the Department of Homeland Security” just recently “warned that white supremacist groups had already carried out more attacks than any other domestic extremist group over the past 16 years and were likely to carry out more attacks over the next year” is incomprehensible.

Task & Purpose regularly publishes opinion articles provided to us by readers and thought leaders. If you would like to contribute a differing viewpoint on this issue, or any other, please send us a pitch or a completed piece at editor@taskandpurpose.com.