An outside-the-box approach to Mission Command

Mission Command philosophy blends the art of command with the science of control. At least in theory. 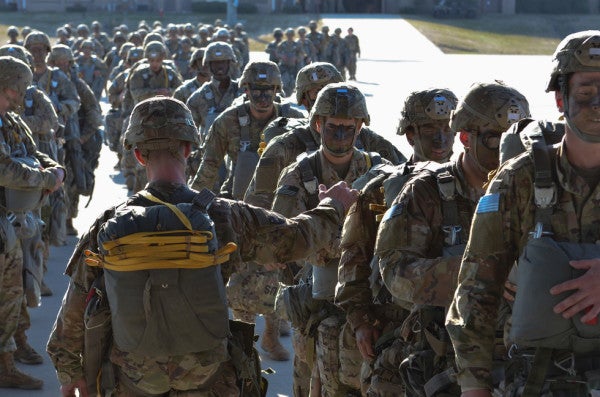 Mission Command philosophy blends the art of command with the science of control. At least in theory. In practice, we do command and control under the guise of Mission Command. But perhaps we should consider an outside-the-box approach: the decentralized management philosophy known as Holacracy.

Imagine a traditional top-down hierarchy chart was a two-dimensional object and you are a three-dimensional being looking at it from above. You will notice that it looks like a dot inside a circle, inside another circle, and so on. Essentially, you have a flat organization organized in circles.

In his bookHolacracy: The New Management System for a Rapidly Changing World, Brian Robertson outlined the “Holacracy Constitution” and its unique form of self-management and self-governance. The constitution provides for a customizable approach for organizations, allowing for an agile organizational structure, greater autonomy for small teams, and an innovative decision-making process. It is like how Gen.Stanley McChrystal (Ret.) transformed the Joint Special Operations Command (JSOC) into a “flat and fast” organization. Table 1 provides a comparison of this innovative approach with our current approach.

Just as a top-down hierarchy applies to command and control, a flat structure, such as Holacracy, applies to Mission Command. In my opinion, this is obvious when you examine the philosophy of Mission Command, outlined in Army Doctrine Publication (ADP) 6-0.According to ADP 6-0, the Mission Command Philosophy is the exercise of authority and direction by the commander using mission orders to enable disciplined initiative within the commander's intent to empower agile and adaptive leaders in the conduct of unified land operations (ULO).

Mission Command is guided by the following principles, which assist commanders and staff in blending the art of command with the science of control.

Why can't we get Mission Command right?

Although official Army doctrine instructs commanders to issue their intent and allow troops to carry out their orders in the best way they see fit, we just can't seem to get it right.

In a thought-provoking piece on why theU.S. Army Can't Do Mission Command, Even When It Tries To, journalist Tom Ricks argued, “Only by a massive reorientation away from its preference for scientific management and bureaucratic routine will it achieve its proclaimed goal of creating an expeditionary force led by adaptive, flexible leaders employing mission command to execute decisive action.”

Using Holacracy as a model and McChrystal's “flat and fast” transformation of JSOC as a narrative, we can successfully reorient away from scientific management and bureaucratic routine. Let's examine how McChrystal's narrative fits Holacracy, which could lead to a successful approach for executing Mission Command in the U.S. military.

InDesign Unbound: Designing for Emergence in a White Water World, Ann M. Pendleton-Jullian and John Seely Brown discuss how McChrystal transformed JSOC. They argue that he transformed JSOC by scaffolding change and not through an entirely new framework. Of this distinction, they wrote, “a scaffold is a temporary structure for supporting something; whereas a framework is like a skeletal structure designed to support or enclose something.”

Pendleton and Brown went on to write that there were “three things we can do to make progress.”

Gen. McChrystal was able to help his organization connect the dots. Or as John Rendon remarked, “We create the dots, we connect the dots, and then pound the dots into the heads of our intended audiences, which for obvious reasons, seldom is successful. The more elegant approach might be to create dots and align them, allowing the audience to connect them and hence own the conclusion drawn from the dots they themselves have connected. This is the art over the science.”

For McChrystal, the dots are analogous to information.

McChrystal created and aligned the dots through the guise of the Change Triangle 3.0, thus allowing his team to connect the dots. InTeam of Teams: New Rules of Engagement for a Complex World, McChrystal wrote that he realized after assuming command of JSOC that modern warfare had changed. To defeat the threat of al-Qaeda he would have to transform JSOC into an organization that was more like al-Qaeda. He argued, “It would take a network to defeat a network.”

In Team of Teams, McChrystal wrote, “To win the war, to regain the initiative, we needed to shift our thinking from a target focus to a problem focus. And when we asked, what's the problem, we knew we needed to understand this new enemy.” Pendleton and Brown posit that McChrystal's vision for transforming JSOC was a mission to regain the initiative in a new kind of war by becoming more like a network that operated both “flat and fast”.

The vision here is similar to the commander's intent in Mission Command as it provides the boundaries to operate within. In Holacracy, this would be the outermost circle and McChrystal would be the Lead Link within that circle. All Sub-Circle's would reside within this Super-Circle.

McChrystal built a narrative around his vision. Pendleton and Brown argue that McChrystal formed his metanarrative around a command where the most elite service members come with their own unique culture. His goal was to create broad and deep transparency allowing for constant information flow. They discuss how he had to change the culture for them to see that every mission was, as McChrystal remarked, “a fight for intelligence and not just a win against the enemy.” What McChrystal was doing here was building a cohesive team through mutual trust. He was essentially forming new Sub-Circles within his Super-Circle.

McChrystal used specific mechanisms to transform JSOC into a network that could operate “flat and fast” with unconventional adaptability. And each one of these mechanisms also corresponds with the Holacracy Constitution and principles of Mission Command. Let's look at how Pendleton and Brown describe some of these mechanisms:

1. Bring intelligence analyst into the theater of operations. McChrystal wrote that he had to break down the cultural stovepipes between JSOC and the intelligence community. This is like role assignment and election of roles. Here, each Sub-Circle is brought into the Super-Circle and joined as one team under a shared and common understanding of the vision

2. New process for agile turnaround of intelligence collected from special ops raids. His intent here was to increase the speed and access to intelligence material in order to better sort and analyze the raw data captured.

3. Operations and intelligence videoconferences (O&I VTCs). McChrystal's goal was to create radical transparency. Pendleton and Brown wrote that this, “would also allow them to fuse generalized awareness with specialized expertise.” McChrystal implemented daily 90 minute updates through O&I VTCs allowing for as many as 7500 participants to join.

4. Updating the F3EA operations cycle by moving operations decisions down the ranks. Supporting entrepreneurship in battle. He changed the priority of the targeting cycles found in traditional military organizations. The F3EA is a targeting cycle to find, fix, finish, exploit, and analyze missions. McChrystal changed the priority from fix and finish to exploit and analyze. Pendleton and Brown explain the cycle as:

McChrystal recognized, just as I do, that it is unrealistic to expect a large bureaucratic institution, such as the U.S. military, to change its organizational structure. Instead of trying to force a square peg into a round hole, he created a blending of the traditional hierarchy with a network. This same blending philosophy could be used to introduce Holacracy to the U.S. military as it offers a new approach to execute Mission Command.

Finally, instead of looking at Holacracy as a completely different approach. I urge you to simply change your view. Instead of looking at a top-down hierarchy from a typical two-dimensional view, adjust the view so you can see it in three-dimensions from above. You will then notice that it looks a little different, yet it's still the same.

The “Mad Major” Jamie Schwandt, USAR, is a logistics officer and has served as an operations officer, planner and commander. Schwandt is a Lean Six Sigma Master Black Belt, Red Team Member, and holds a doctorate from Kansas State University. This article represents his own personal views, which are not necessarily those of the Department of the Army.

SEE ALSO: The soldier who allegedly took an APC joy ride through Virginia is now accused of violating his bond