Looking For A Gender Gap In The Army? Try The Army Chief Of Staff’s Reading List 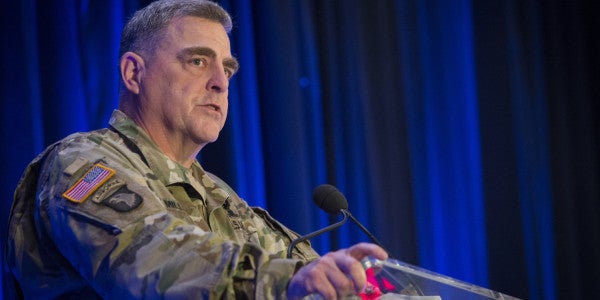 On Aug. 9, U.S. Army Chief of Staff Gen. Mark A. Milley released his Professional Reading List, an annual collection of books recommended for Army and civilian personnel to better understand the range of military, economic, political, and future issues facing the service, the country, and the world. Our review of the list revealed a significant blindspot. Of Milley’s 111 recommendations, only one was written by a woman.

The lack of female authorship reflects a legacy worldview within the military that is shortsighted at best, and, at worst, biased against equality of women in society and the military. These lists signal the perspectives valued by the chief of staff as he considers his Army today, and its future plans. The skewed ratio of 111 male voices to 1 female voice communicates a leadership message of inequality that he should correct.

We value the military’s professional reading lists because they shape thought processes and decision-making tendencies of officers, non-commissioned officers, enlisted personnel and the civilian workforce. They influence the syllabi at service academies, where the minds of an influential segment of the future officer corps are molded. They drive Army professional development and help to determine which articles are shared across units and commands.

Professional military education teaches service members that military success depends on analyzing political-military options from a diversity of sources. Unfortunately, Milley’s list reinforces prevailing male-dominant thoughts of the world and the Army. With women’s writings essentially not present, Milley shrinks the range of perspectives with which Army personnel should grapple, degrading their readiness and professional preparation.

Reading lists can reinforce or challenge embedded professional biases as the military transforms its warfighting for the 21st century. Milley’s seems to imply that there are no credible female authors whose work speaks on topics relevant to the Army’s future. We would argue that Amy Webb’s The Signals Are Talking: Why Tomorrow’s Fringe Is Tomorrow’s Mainstreamprovides important insights into how global trends might affect individuals and societies, which could help Army personnel better anticipate changes in their career paths or the nature of the future fight.

The composition of the list also runs counter to trends in the military and the private sector, where most leaders are promoting female voices, leadership, and equality in the workforce. Top-tier firms like Google and Uber have fired personnel and toxic leaders due to perceptions of anti-female organizational climates. In society, conference organizers now avoid all-male panels, lest they suffer the ire of attendees or negative publicity. The Department of Defense has opened all of its occupational specialties to women, on urging from Congress. In contrast, Milley’s unbalanced list is out of tune with prevailing governmental and societal policy and practice.

This issue is not Army-centric: the Marine Corps, Navy, and Air Force share similar deficiencies in their lists. While the service chiefs are ultimately accountable, their respective staffs, which propose many of the titles, share responsibility for the lack of diversity among referenced authors.

Milley and his staff were not without resources to consult. Women Also Know Stuff, Foreign Policy Interrupted, and Bulbula were all created to serve as clearinghouses of female expertise across a host of disciplines. These organizations could have recommended notable books, such as Condoleezza Rice’s Democracy: Stories from the Long Road to Freedom, Erica Chenoweth and Maria Stephan’s Why Civil Resistance Works: The Strategic Logic of Nonviolent Conflict, and Susan L. Marquis’ Unconventional Warfare: Rebuilding U.S. Special Operations Forces.

Thankfully, Milley’s recommendations rightly call for the Army to gain greater understanding of the environments and cultures in which it fights; of the causes and consequences of conflict; and of alternatives to violence. But here too, many female authors are readily available.Moreover, some female authors have written foundational texts in fields critical to national security, such as Martha Crenshaw’s Explaining Terrorism: Causes, Processes and Consequences; her work has been cited by hundreds of books and journal articles.

Other female authors who could have been included are challenging conventional wisdom. Elisabeth Jean Wood’s research inInsurgent Collective Action and Civil War in El Salvadoridentifies new motivations for citizens supporting rebellions. With terrorism and internal conflict representing critical challenges for the military, Milley could have recommended books like these to improve the diversity of inputs that drive Army planning and training.

Perhaps most surprisingly, Milley’s list demonstrates a lack of political savvy and self-awareness at the four-star level that should give his civilian leadership pause. For example, Warriors and Citizens: American Views of Our Military, edited by Dr. Kori N. Schake, should have earned a place on his reading list for its excellent description of how soldiers are perceived in our society, both as warfighters and as veterans. It also happens to be co-edited by Milley’s boss, Secretary of Defense James Mattis.

Congressional overseers should question the shortsightedness and bias demonstrated by Milley’s recommendations. Many of them know that women make up 14% of the Army’s million-plus members, especially those who pushed for gender equality in the force. Yet Milley seems blind to how a male-dominated list might signal a preference for male voices in the Army, at the general’s conference table, or still worse, atop future promotion lists.

We do not deny that the majority of the research done in fields of interest to the military has historically been conducted by men. But times have changed. Women are breaking important ground in these fields. From Monica Duffy Toft’s Securing the Peace: The Durable Settlement of Civil Wars to Isabele Allende’s Inés of My Soul, female authors are writing on novel topics and regions of the globe that Army personnel could have been more thoughtfully encouraged to explore.

As chief of staff, Milley has a duty to lead his personnel to new intellectual ground, even if that terrain is unfamiliar. To his credit, he has done this in some subject areas. However, he would be wise to admit his mistake in overlooking so many female authors. He should update his list to reflect the intellectual battlespace of today, where women’s voices are increasingly heard, referenced, and respected.

Meg K. Guliford is a PhD Research Fellow at the Center for Strategic Studies at The Fletcher School and a Truman National Security Fellow.

Erik J. Leklem is civil-military relations lecturer with the Naval Postgraduate School and a Truman National Security Fellow. Views expressed are their own.