What it was like for National Guard soldiers to pick up the pieces after Jan. 6

"This is unreal," we said to each other, over and over. 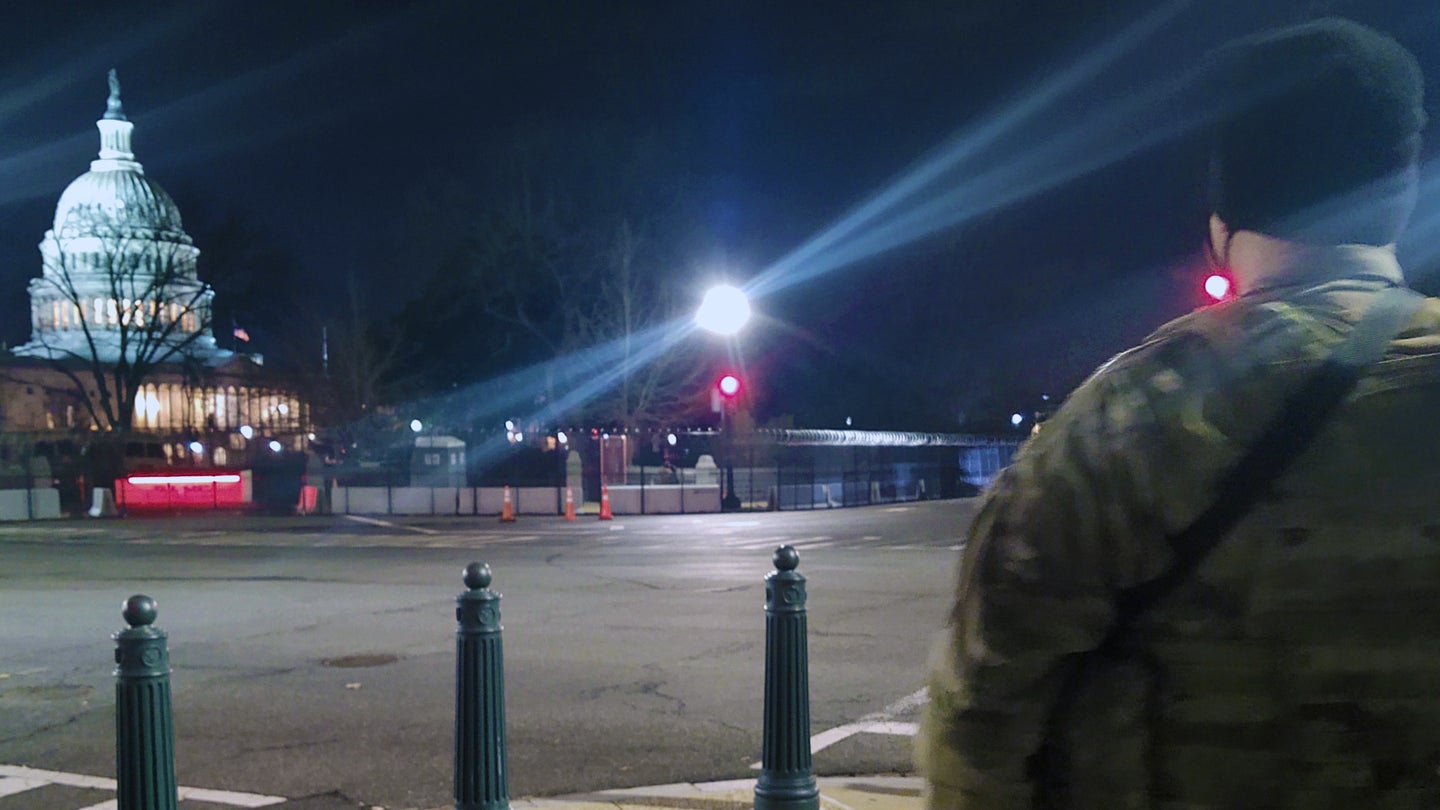 A Maine National Guard soldier takes in the lights of the Capitol building, January 18, 2021 (Photo by Jonathan Bratten).
SHARE

Editor’s note: In the aftermath of the Jan. 6 Capitol Hill riots, Capt. Jonathan Bratten and his soldiers deployed to provide security through the inauguration. This is the story of their experience there.

It was January 14, 2021. I got the call that every National Guard company commander thinks about: the call. The same that might have arrived for militia commanders in the Aprils of 1775, 1861, or 1917. In short, fulfill your Constitutional oath. I was no stranger to this, having dropped everything back in 2011 to make the long and winding journey through the White and Green Mountains to bring relief to hurricane-stricken Vermont. But this time it was different: I was stepping away from the proverbial plow to fulfill not only the spirit of my Constitutional oath but the literal words of it: “all enemies, foreign and domestic.” I was going to take my combat engineer company to Washington, D.C.

I thought about those words about three days later, standing in the streetlight’s glow around 2:00 a.m., right between the Jefferson and Madison buildings. The glowing dome of the Capitol stared at us, as I stood next to one of the soldiers in my company, staring back, both of us feeling strange within our body armor, weighed down by the magazines of ammo in our pouches, shifting our M-4 carbines across our chests.

As we took in the surrealism of our situation in those early morning hours, I thought of the last time that my company had been to Washington, D.C. When I am not a commander, which is most of the time, I am a historian, and so these two weeks would keep both sides of my personality in constant – if not frantic – engagement. The last time this company – which dates to 1810 – was in D.C., the year was the spring of 1861 and it was Company G of the 1st Maine Volunteer Infantry Regiment, encamped on Meridian Hill – just about 30 blocks from where we were then standing. The Capitol’s rotunda had not been completed at that point, so our forebears would have gazed at a network of wooden cranes, platforms, and scaffolding. The rations were so bad that soldiers of the company begged for better food at the door of the White House kitchen. This time around, local pizza joints supplanted our rations, as donations from generous individuals allowed for free delivery for soldiers on duty.

Our duty location was the Madison Building of the Library of Congress. After a quick nap under a research desk – we napped during our 24-hour shifts so as not to go crazy – I meandered around the Madison Building. Constructed in 1976, the building is a memorial to James Madison and contains such offices as the U.S. Copyright Office and the Law Library. In fact, our battalion headquarters was in the Copyright Office. Across the way in the Jefferson Building, it was much the same – with cots in lines under the marble arches and battalion colors posted outside research rooms along the dark-paneled hallways. Which was, of course, utterly bizarre. We got meals in the main hall, where “Jemmy” — as James Madison was known to his associates — looked down on us from his tall marble edifice. I’d go in there for coffee, as well, where I was struck by the words of the Federalist Papers inscribed in gold along the walls – “The safety and happiness of society are the objects at which all political institutions aim, and to which all such institutions must be sacrificed” – juxtaposed against the stacked and orderly rows of riot gear beneath them. Gear that was, thankfully, never used. What an arc that history takes.

Capitol Hill itself had changed its very nature. There’s a feeling you have after Christmas when everyone leaves and the house is weirdly empty. The building is the same but it’s not the same place it was just a little while earlier. Capitol Hill, without its crowds of tourists, without legislators and lobbyists hurrying to and fro, seemed much the same way. Only Guard troops and law enforcement officers could be seen. It felt familiar, and yet wholly and completely alien. One of the strangest things I have ever felt. Capitol Hill was an armed camp at the center of multiple rings of checkpoints, roadblocks, and other security precautions. This was at first shocking. “This is unreal,” we said to each other, over and over. But once the initial shock had passed, it was replaced with quiet pride. Yes, it was different. Yet we were there not as occupiers, but as guardians. In our own small way, we were there to ensure that the Constitutional process was carried out and to make sure it would not be waylaid by violence. When all of this was over, we would put off the soldier — remove the body armor, the gas mask, lay down the weapon — and resume our roles as citizens. Just as the Guard has ever done.

When we first hit the ground on January 16, things were more or less chaotic. After an exhausting night trying to find where we were supposed to go, we managed to get lodged in hotels in Virginia. Quite nice lodging, too, in 4-star hotels, although we were scattered across northern Virginia. Only to find the next morning that we needed to move. The good news: all the Mainers would be in one hotel.

“We’re all being transferred to the Watergate Hotel,” said my executive officer, as we scrambled to get the news out.

“Wait, hold up, the Watergate?” I asked. Yes, dear readers, the Watergate. To add to the surrealism of it all, we moved into a lodging now synonymous with political corruption and scandal. But also, full of all the trappings of 1970s luxury, so there was at least that. In between our 24-hour shifts, we returned to the hotel where we mostly slept, and ate. There was one night the leadership all pitched in and we had a pizza party for the company in the basement of the Watergate Hotel before going on shift at the Library of Congress. Which, even as I type it, remains just an incredibly bizarre statement. But history is merely a collection of such bizarre statements, so who am I to judge?

When your days and nights blend together, one must do something to mark the passage of time. For us, that was the immortal game of cribbage, which was an ever-present activity in our little command post tucked away in a research room off the main atrium. The players changed according to shifts, but the board remained as the one constant in our ever-changing world. As someone from “away” – that is, not born and bred in the Great State of Maine – I had no concept of the fervent devotion to this game from the residents of the Pine Tree State. Mainers are apparently taught the tactics of this game at their grandmothers’ knee. Everyone’s grandmother, I am often informed, is the best cribbage player, the most cutthroat, and the most ruthless. This matriarchy breeds generations of cribbage fanatics who I have seen ply their avocation in the snows of Vermont huddled around a fire and in the buggy swamps of Louisiana. If two Mainers climb Everest, I have no doubt that they will pause for a game of cribbage. It is a matter of when, not if, the two Maine astronauts will bring cribbage to the International Space Station.

Jan. 20 dawned cold and dark. I stood on the steps of the Madison Building with one of my platoons, stamping our feet against the cold while also admitting that this wasn’t the cold of Maine. Later, we stood on the corner of the perimeter closest to the Capitol, hoping to hear Lady Gaga sing. We couldn’t hear a thing. It was cold, windy, and as usual, confusing. One detachment of troops went to attention facing the flags on the Capitol, while another faced the flags on the Jefferson Building in the opposite direction. It was the type of regimented chaos that one expects in the Army, and that has ever been its trademark. And as the hours ticked by, and the President was sworn in, nothing happened. Which is exactly what we planned to have happen, for once. Or, not happen, as was the case.

With the mission coming to an end, we began the process of turning in weapons and ammunition. Soldiers coming off shift for the last time turned in their weapons and unloaded their magazines, counting every round meticulously. The gleaming brass bullets were removed from their curved magazines and placed in drab cardboard boxes, neatly stacked one atop the other in research filing carts. The packed ranks of ammunition made an odd picture on a cart bearing the placard, “Reader Registration, LM-140.” By January 24, our entire contingent was mission complete. The Madison Building could return to a home of knowledge and learning. Filing carts could go back to carrying books and research requests. Another odd chapter closed in our nation’s odd history.

With some free time on our hands, we took a few hours to visit the wind-swept Washington Mall. We visited the Lincoln Memorial, where I reenlisted two soldiers on the steps, looking out towards the Washington Monument. Then the Korean War Memorial where I reenlisted one more. Then the World War II Memorial, where we stopped at the “Maine” column and talked about how our predecessors had fought and bled their way across the Pacific. This company island-hopped its way through the South Pacific, pausing to curse Douglas MacArthur as they landed on Luzon on January 9, 1945 – an anecdote the current soldiers of the company took great amusement from. Soldiers, it seems, do not change. Two more soldiers opted to take their oath of reenlistment there. The words of the oath — “protect and defend the Constitution of the United States, against all enemies, foreign and domestic” — now carrying even more meaning, and echoing off the stone surrounding us.

The wind cutting into us, we stopped at the Washington Monument to verify that it was still standing — It was, very nicely — and then pushed on to the next great American monument: the line of food trucks. Having thus seen the glory of the nation, and eaten of it, we headed back via the Vietnam Veterans Memorial. The low, black wall doesn’t look like much from the distance, but when you are next to it, it encompasses you entirely and you feel very small, and awed. Almost lost in it.

Sometimes, I think it can be hard for our service members to connect their own service to something larger. The day-to-day grind seems to take over. It has always been this way throughout history. Soldiers’ diaries from every war are merely litanies of the mundane: food, weather, aches, and pains. Sometimes, there are battles. But mostly, it’s the drudgery of reports, inspections, and the bureaucracy that attends armies. Visits – and experiences – like this are where we remember why we enlisted in the first place. A confirmation, as it were, that even in faraway Maine, “we here highly resolve that these dead shall not have died in vain — that this nation, under God, shall have a new birth of freedom — and that government of the people, by the people, for the people, shall not perish from the earth.”