How To Fix The Army’s Recruiting Crisis

Almost 17 years into Global War on Terror operations, the gulf that marks the familiarity gap between the military and... 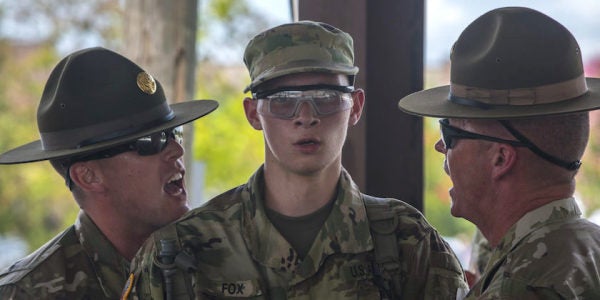 Almost 17 years into Global War on Terror operations, the gulf that marks the familiarity gap between the military and society seems larger than ever.

Trends show a growing burden of conflict shouldered by a shrinking “warrior caste” of individuals who serve, as military service itself increasingly becomes a hereditary profession. A concurrent trend is a looming recruiting crisis given the small percentage of young Americans eligible, let alone interested, in serving. While economic forces heavily impact military recruitment, the broader trend of isolation of the military from society will continue to be an underlying factor. The Army has had to lower recruitment goals against the task to grow the force to 500,000 active duty soldiers despite growing opportunities among previously untapped sources of talent, such as women and marginalized groups.

To combat weakening connections between Americans and the military, the Army needs to take advantage of the branding void left in the wake of the “Army Strong” advertising campaign to shift the Army’s marketing focus from promoting personal advancement to strengthening public understanding. Clarifying what the military does and what it is will consequently create an environment where service is better understood and ideally expand interest in service.

Since the end of the draft in 1973 and the need to recruit an all-volunteer force, the Army-sponsored three prominent marketing campaigns employing commercials, flyers, and posters. The first campaign lasted almost two decades and depicted the Army as a place to “Be All You Can Be,” which sold the Army as an opportunity to learn job skills and earn money for college. “Be All You Can Be” marketed to the individual and promoted how the Army could improve a soldier’s standing in life. In 2001, “An Army of One” replaced “Be All You Can Be” to appeal to the perceived increasing individualistic streak in young people and further emphasized the difference a single person can make. “An Army of One” contradicted the focus on teamwork and unit cohesion inherent in the Army and was replaced in 2006. The new campaign, “Army Strong,” continued the strategy of self-actualization and self-improvement by drawing attention to the emotional and physical strength recruits could gain through service. Failing to resonate with the public, “Army Strong” was scrapped in 2015.

Since rolling back “Army Strong,” the Army has opted to not promote a new tagline but push the so-called “Team” initiative. In contrast to the previous campaigns aimed at the Army’s value to the individual, the “Team” initiative establishes the Army brand an elite team that confronts the toughest challenges. Furthermore, it attempts to explain to the public what the Army is through different jobs and core values. The failure of post-9/11 Army messaging illustrates the need for the Army to reestablish its identity with the public. Given that many recruits have exposure to the military and family who are serving or have served, this reintroduction to the Army and those who comprise it is essential to create an environment in which a more Americans view the Army as an option. As a part of larger efforts to reintroduce the public to the Army, the “Team” initiative is a step in the right direction to ideally provide a disconnected public with a better sense of military service.

Results from the “Team” initiative’s focus on social media and veteran outreach indicate a desire on the part of the public to learn more about their military and interest within the veteran community to share their stories. Humanizing efforts such as the “I Became A Soldier” campaign, a wherein veterans held up signs about why they joined the Army then shared on social media, “Meet Your Army,” and the DoD-wide “This is Your Military,” have similarly made strides in familiarizing America with its military and engaging communities in which the military has little presence.

These social media and face-to-face efforts are outside traditional Army recruiting methods. Deploying more recruiters, offering additional financial incentives, and increasing advertising spending may have been satisfactory efforts when the focus of Army recruiting was on the individual, but no longer can the military assume these techniques resonate among young Americans nor that there is significant propensity to serve. Consequently, the Army must shift its focus to create an environment in which service is encouraged and understood.

Part of this effort would shift Army marketing outside the sole domain of recruiters and United States Army Recruiting Command. Every commander and unit should be encouraged to engage with the local community and develop relationships that showcase the Army and cultivate a better understanding of what the Army does and can do. While limited in effect to geographic areas near Army installations, such outreach will help foster a cultural attitude that sharing Army values and engaging with local communities is a responsibility shared by the entire force.

Related: The Army Is Missing Recruiting Goals — And It’s Only Going To Get Worse »

For regions with few Army installations or ones historically underrepresented in the Army, such as the Northeast, the “Meet Your Army” campaign provides a solid template to connect the public with the military. To date, pilot programs have centered on senior officers who participate in various engagements in select cities over a 48-hour period. Though these engagements have been meaningful and effective, to an extent, a broader shift away from marketing the Army to the individual and towards the public will need to be more persistent engaging the public with rank and file soldiers. Two days of select media coverage is insufficient to edify a public whose knowledge of the military is largely shaped by movies.

Meanwhile, the Army should not be afraid to take risks with the “Team” initiative by investing in longer commercials to tell a more complex story. Army commercials should not be limited to a target audience of 18- to 24-year-olds and occasionally their parents but should tell compelling stories of an Army team that draws the attention of a vast cross-section of Americans. Any American can be an influencer or mentor that encourages service.

While children of service members provide a reliable recruiting base, current marketing strategies fail to reach vast segments of American society. To increase the propensity to serve, the Army must increase understanding and familiarity with the military; to encourage individuals to enlist, the Army must create a cultural environment where service is encouraged. The Army has marketed to individuals for forty years and seen its recruiting base dwindle; it is time to start marketing to society instead.

James Fahy is a member of the US Army Reserve with a Master's in War Studies from King's College London. Emma Moore is a researcher with the Center for a New American Security (CNAS)