Banning Confederate-Named Bases Is Only A Solution For Sensitive Snowflakes

People all across America want to remove the monuments, memorials, and installations that honor the fallen Confederate generals. In their... 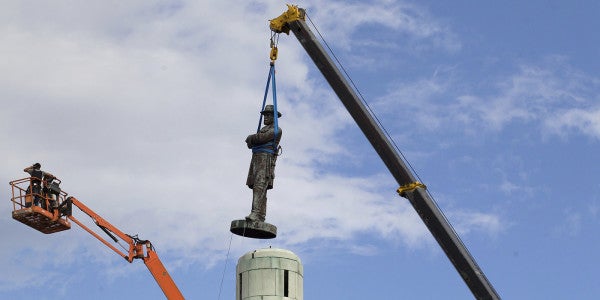 People all across America want to remove the monuments, memorials, and installations that honor the fallen Confederate generals. In their minds, the displays are offensive and hurt people’s feelings. If we are going to remove everything that’s deemed offensive and hurts someone’s precious feelings, we have a long way to go in society.

It’s important to remember the past and the sins of our countrymen. We can learn from their mistakes and move forward as a people. That’s how progress works in any culture.

One way to do this is to maintain the monuments that showcase the traitorous and villainous. By looking at a monument dedicated to Gen. Robert E. Lee, I can explain to my children that it took a great Civil War to end an evil. I can further clarify that no evil should be allowed or tolerated.

But I will be sure to include that Lee fought for his country in the Mexican War and his state of Virginia in the Civil War. He was farmer and teacher that dedicated his life to his nation.

RELATED: It’s Time To Change The Names Of Bases That Honor Confederate Traitors »

Lee surrendered honorably and asked other Confederates to follow his example. We should all be thankful he didn’t launch a guerrilla-style war for the next decade furthering the conflict.

As most educated Americans are aware, slavery was widespread when the United States was formed and is still practiced in some parts of the world today. Empires including the Egyptians, Romans, Indians, Chinese, and Arabs all practiced slavery or were involved in the trade. It was a common-market principle that was eventually outdated and unprofitable due to industrialization. In generalist terms, slavery was dying a natural death because of the advancement of humankind.

My fellow citizens are not going to be less bigoted because you take down a statue of Lee or change every high school or rename every base. Even if you altered the name of Fort Lee to Fort Washington, there would still be racists and white nationalists roaming the streets.

Of course, you wouldn’t change the name to Fort Washington, because our first president owned slaves. You could change it to Fort Malcolm X in honor of the great civil rights leader. Of course, he was anti-Semitic and hated all white people so that would probably not be allowed. Perhaps Fort Roosevelt after our 32nd president would be more appropriate. Of course, he interned innocent Japanese-Americans and that would be offensive to most Asian-Americans.

My fellow citizens are not going to be less bigoted because you take down a statue of Lee or change every high school or rename every base.

By keeping historical monuments and keeping those memories alive we can learn from them and make better decisions. Those who do not remember history’s sins will repeat them in the future.

I understand my snowflake friends and colleagues want to ban everything that offends them. That’s understandable because no one wants to hurt other people’s feelings. Whether you’re in the military or not, you want for people to get along and be hospitable.

However, that’s not how reality works, and my snowflake associates are aware of this fact. I was offended when my drill sergeant yelled at me. Did I tell him that my feelings were hurt and he should know better? No, I learned from my mistake and became a better soldier. I am certain we can look at the Confederate shrines and be a better country.

All great men are imperfect and lack moral character. If you want to change every monument, street, city, state, and building that’s named after a flawed historical figure, you have a long way to go.

Task & Purpose regularly publishes opinion articles provided to us by readers and thought leaders. If you would like to contribute a differing viewpoint on this issue, or any other, please send us a pitch or a completed piece at editor@taskandpurpose.com.

Matthew L. Magreta is a U.S. Army sergeant currently stationed at Corpus Christi Army Depot, TX. He served as a Public Affairs Representative during Operation New Dawn and has a B.A. in History from Western Michigan University. The views and opinions expressed here are the author’s and do not necessarily state or reflect those of the United States Government or U.S Army.