It sucks to be a pioneer. At least once in her career, every woman who has served in the military... 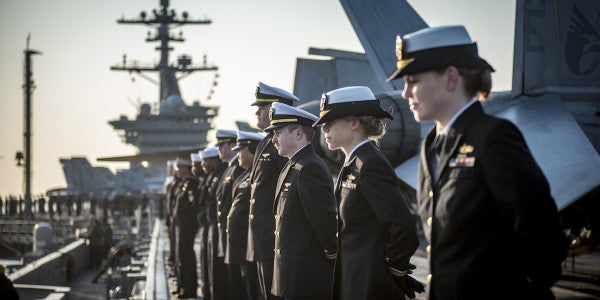 It sucks to be a pioneer. At least once in her career, every woman who has served in the military has been the only woman in the room. In addition to the loneliness of being the “token woman,” women who are the “first of their kind” in any occupational specialty or position may simultaneously endure both increased scrutiny and increased isolation. Often, the role of a pioneer is to the ensure that those who follow her only have to do the job they have been assigned to do, and not fight sexism as well. In the process, pioneering servicewomen develop their own strategies to survive.

I was reminded of these survival mechanisms when I was the most senior female officer in an expeditionary unit.

Related: It’s Not Just Your Imagination: It Really Is Harder For Women To Get Promoted »

One of my junior officers, Christine, whose name has been changed here, stormed into my office one morning, and announced, “I have no time for weak females.”

She had already earned a stellar reputation in her field of expertise. She was one of the first women in the Navy to earn her subspecialty qualification, and already had several combat deployments behind her. She now feared that an underperforming female subordinate on her team would affect her own credibility.

Christine and I were also both pioneers of circumstance. She was the first women to have graduated from a course that was only fully gender-integrated in 2009. I had been recruited into the community largely because of her success. An unplanned loss of the original department head a few months earlier had unexpectedly made me the only female department head in the unit, and to anyone’s knowledge, the first — man or woman — with relevant operational experience from a deployment during which I was the first woman to lead our particular type of team. I was frequently the only woman in the room at meetings, including when we would conduct video teleconferences with other units.

In her frustration with an underperforming female sailor, Christine was keenly aware that women are often visible as members of a category, not as individuals. When a woman in our field failed, it reflected poorly on all the other women, and gave the special operations teams we supported another reason to marginalize us. In that context, “rejection of one’s kind” was a learned behavior of self-preservation. Separating ourselves from negative stereotypical characteristics ascribed to women was a learned behavior once needed to professionally survive. Success had once been contingent on being accepted as “one of the boys.” Yet, rejecting our sisters made us complicit in the circumstances that made being the first of our kind so challenging for us. We had an obligation to ensure that the barriers that had existed for us were eliminated for the women who followed us.

As retired Marine Lt. Col. Kate Germano recently wrote, there is a “principle and obligation to lead and advocate” for those who are “most marginalized in our culture.”

Despite our expertise and effectiveness, Christine and I had experienced an additional burden of convincing men who were threatened by our positions of authority as leaders with operational experience. When male superiors threatened by our presence attempted to pair us against one another, we developed an alliance instead. Once we gained credibility, we were also often looked to as gatekeepers for new women coming to the unit. We felt we had a responsibility to ensure that the path for the women who followed us was not as rocky as our own. Publicly voicing concerns about an underperforming female colleague or subordinate might be dangerous, because as Sheryl Sandberg observes in “Lean In”: “Women’s negative views of female coworkers are often seen as an objective assessment—more credible than the views of men. When women voice gender bias, they legitimize it.” In that sense, we felt an additional responsibility to ensure a way for women in the command to develop professionally without gender biases impacting their credibility.

In order to do so, we felt we had two key responsibilities. The first was to provide female subordinates with collaborative mentorship — we had to stick up for one another. We discouraged a competitive “queen bee mentality” among the female combat-support enablers, actively encouraging our sailors to separate performance judgments from gender. The second, and most integral, was to use our own credibility to encourage men to be active champions of women in combat support roles. As Teveia Barnes explains in a chapter of Deborah L. Rhodes’s “The Difference “Difference” Makes,” the most effective allies in any workforce for advancement of women are often white men, who as the majority group with the most power, have the most ability to champion their female colleagues. Our circumstances were no different: The best advocates for the professional development of female sailors were the white men who occupied the most senior ranks of our organization.

Ultimately, the men who led our organization wanted to achieve mission success, and to recruit, train, deploy, and retain the best people. Christine and I realized that we had enough credibility to remind our male mentors and bosses that a significant portion of the “best people” in our unit were women. These men recognized that the organization’s success — and therefore their own success — relied on women, and that used their authority and credibility to ensure they succeeded. Furthermore, their advocacy for women in the community gave permission to male junior officers to emulate this behavior.

Once the men in our organization recognized that supporting female teammates was integral to mission success, they took an active role in supporting us. When men in our organization became champions of women, they also reduced the pressure on Christine and me to be the sole advocates for women in the unit. By supporting one another and other female combat-support enablers, and then recruiting men to do the same, we were relieved from the burdens of tokenism. Finally, by men taking on the responsibility of sponsoring women in the unit, they inspired a modest cultural change that had enduring effects after women leaders in the unit transferred.

Christine went on to lead a team that had more women on it than ever before. She came to see that female sailors she had once wanted to distance herself from in fact needed her mentorship the most. And while she actively advocated for all of her people to receive the most challenging assignments where they could be both impactful and advance and develop professionally, she was not afraid to speak up if she saw a female sailor overlooked.

Some see overcoming systemic and structural gender bias as insurmountable. But as we learned on my team, we all have small spheres of influence where we can have enormous effect.