In 2007, I joined the Marine Corps and proceeded to spend five years resenting the term “Female Marine” — or... 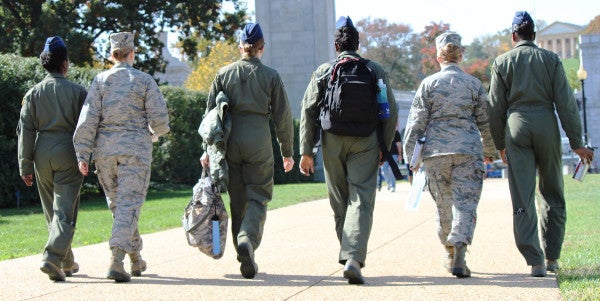 In 2007, I joined the Marine Corps and proceeded to spend five years resenting the term “Female Marine” — or more simply “Females.” Even at the age of 19, I considered myself a feminist, but to me that meant being equal to my male peers, not segregated by my gender. The day I humped back from the Crucible and my drill instructor gave me my Eagle, Globe and Anchor, Sgt. Joint didn’t say, “Congratulations, you’re now a Female Marine.” Joint said, “Congratulations, you’re now a Marine.”

Now, I work in Washington, D.C., representing nearly 2 million members of the Veterans of Foreign Wars (VFW) and their families on Capitol Hill. I have a portfolio specifically focused on women veterans, and I now say “women” instead of “female” because I respect the difference between sex and gender. Up until recently, women made up such a small percentage of the veterans population that VA simply didn’t have enough of us around to be the subject matter experts in gender-specific care. Now they’re willfully playing catch-up. Women veterans are expected to have a larger population than that of the entire population serving in the military by 2030.

Recognizing in 2016 that veterans service organizations lacked the necessary information to effectively represent women veterans’ needs and challenges, VFW’s women’s committee conducted an extensive survey and gathered data from thousands of women. We then used the results to identify four major areas of concerns across all generations: 1) a lack of access to gender-specific health care, 2) limited outreach to older generations, 3) more recognition as veterans who selflessly served their country, 4) and more solutions to the specific barriers homeless women veterans face.

These are complex problems that require advocacy, funding, awareness, research, and collaboration between Congress and the VSOs in order to bring to fruition — no small task in 2017. Still, one veterans group has decided a much more important issue is to change the VA’s motto: “To care for him who shall have borne the battle and for his widow, and his orphan.” — a quote from President Abraham Lincoln, which the organization deems “sexist” and “ignores and obscures the needs of women veterans.”

While the cause is noteworthy, the actual implementation will cost money. Not pennies, not quarters – but most likely millions in taxpayer dollars. The cost of updating every pamphlet, every website, every letter head, every “Welcome to VA” sign, and the infrastructure of every chiseled motto will financially add up quicker than some may think. Meanwhile, there are dozens of other legislative changes needed to improve the quality of care women veterans receive, which all also cost money.

Additionally, nowhere in the thousands of open-ended responses VFW received in 2016 did anyone request to change the pronoun used in VA’s motto or to change the quote at all.

What we did read over and over again is that one of the biggest barriers homeless women veterans face when trying to overcome homelessness is child-care access because they can’t make appointments without making sure their kids can go somewhere safe. Women aren’t going to worry about the VA’s motto on a sign if they can’t get to an appointment.

Private-sector insurance does not charge copayments for preventive medicine because it’s cheaper to prevent disease than it is to treat it. Yet, thanks to law written by Congress, the VA is required to charge for nine out of the 11 of these medicines, three of which are women-specific: prenatal vitamins, contraceptives, and breast cancer-prevention pills.

There’s also a dire need by former servicewomen for group-therapy access for sexual-assault survivors, but not all VA facilities have enough female patients to warrant this resource. Therefore, at the very least, the VA needs to expand telehealth services and allow more women to electronically partake in these sessions.

In other words, women veterans need health-care providers who understand our gender-specific needs. They also need advocates who will hold Congress accountable and make sure the VA has the funding necessary to not only fill shortages but train more providers. This includes everything from pap smears to postpartum counseling. VFW is doing that and won’t give up until women receive the same treatment and high-quality care as men.

All these inequities require money, a lot of money. The priorities for where taxpayer dollars for women veterans must go are clear: care and benefits. Resolve the inequities.

I use VA for all my health care, whether it’s related to my sexual assault, mental health, primary care, gynecology, or physical therapy. Sure, it would be nice to one day walk into my clinic and see a motto that acknowledges my service too. Or get to a point where we don’t need gendered pronouns at all — but not at the expense of improved services.

Action is a gender-neutral verb; and action, not words, is what we should all be focusing on.

Kayda Keleher served in the Marine Corps from 2007-2012 with one tour in Afghanistan. She works as an Associate Director for National Legislative Services at VFW where her legislative portfolio covers health care, homelessness, and women veterans.