When Drill Instructors Go Off-Script, The Consequences Can Be Fatal

The word Marine is synonymous with action. Initiative, or taking action in the absence of clear instructions, can mean the … Continued 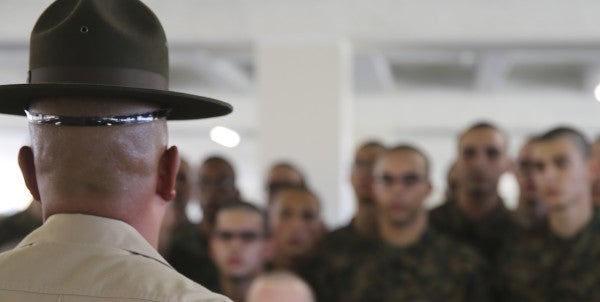 The word Marine is synonymous with action. Initiative, or taking action in the absence of clear instructions, can mean the difference between mission success or failure. However, when drill instructors stray from doctrine and regulations and employ illegal methods in a misguided attempt to make their recruits tougher, they aren't exercising initiative — they are demonstrating cruelty, poor judgment, and questionable ethics.

As demonstrated in most recruit abuse and hazing cases, when frustration and emotions supersede the intent and purpose of training regulations, bad things happen. Mostly recently, several individuals came forward and spoke to The Island Packet newspaper about being shamed and hazed during a training scenario.

The Korean War history class for Marine recruits at Parris Island is the latest incident to garner negative press for the Corps. The amphibious landing at Inchon and the battle of Chosin Reservoir are landmark battles in Marine Corps history. As a result, the class on the conflict in Korea has a prominent place in recruits’ instruction during their first few weeks of boot camp. But when checks and balances fail in the supervision process, what should be a lesson in our core values can easily spiral out of control into the humiliation and maltreatment of recruits.

The Korea class begins with an instructor teaching that following World War II, the Marine Corps downsized from 300,000 to 80,000 active-duty troops. When North Korean and Chinese communists crossed the 38th parallel and invaded South Korea in 1950, President Dwight Eisenhower was unprepared to respond. As a result, the entire Marine Corps reserve was called to duty, and for the first time since its inception, the new selective service system was put into action. Very few recruits know that the need for Marines was so great that some of the draftees were deployed without even completing recruit training. In fact, legend has it that the word grunt is an acronym for Ground Replacement Unit Not Trained.

To emphasize the commitment that these individuals demonstrated by giving their all during the battle for Chosin, midway through the class, another instructor walks into the classroom to inform the recruits that the United States has been attacked, and that they have a choice. They are all instructed to close their eyes, and to put their heads down if they want to deploy immediately to fight the threat, or put their hands up to indicate they want to quit.

To say the instructor has the full attention of the recruits at that point is an understatement. In that moment, each recruit is forced to quickly weigh what is most important to them. Unlike the draftees who deployed to Korea, they are given a choice. Emotions run high, and often, the recruits sob uncontrollably as they are forced to make what seems like an impossible decision: Be brave and deploy to the front lines immediately or face disgrace by returning to the family they might never otherwise see again. It is a teachable moment in commitment and the lasting legacy of our fore bearers.

Once the recruits make the choice either to deploy or quit training, the demonstration should be complete, and those who choose to quit should be kept anonymous. The point is to cause the recruits to reflect on their reasons for enlisting and to reinforce the core value of commitment.

Unfortunately, on some occasions the already-exhausted and frustrated drill instructors use the class as an opportunity to make a list of the recruits who raise their hands to quit, or to make an example out of them in front of the class. Those recruits are perceived as cowards and are then singled out by the drill instructors for “extra attention” — treatment that is often cruel, malicious, and serves no real training purpose. At that moment, the drill instructor has lost their moral authority over their recruits.

Some of the most talented individuals I worked with in my 20-year career as a Marine were drill instructors. But for all of the legends and lore connected with their craft, drill-instructor duty can be brutal due to the long hours and mind-numbing repetitiveness of the training cycle. Unlike recruiting duty, drill-field regulations and training plans clearly dictate the daily schedule and the responsibilities of the drill instructor. There is very little room for creativity or autonomy, and this is by design.

Drill instructors often complain that the strict recruit training regulations and seemingly intrusive supervision requirements imply a lack of trust by the leadership. This couldn’t be further from the truth. As the training cycle ticks by and sleep deficits increase due to lack of time off, small irritations can fester into an irrational hatred of recruits. Since exhaustion has a clear and adverse impact on an individual’s judgment, boot-camp regulations and training plans must be detailed enough to eliminate the need for drill instructors to go off script.

As the scandals at Parris Island have repeatedly demonstrated, when drill instructors get creative, injuries — and even death — can result.

Yet in comments’ sections following the publication of articles related to the systemic abuse of recruits at Parris Island, current and former Marines consistently single out the recruits as the problem. The vituperative comments by these individuals portray the recruits, many of whom bear the mental and physical scars of maltreatment by their drill instructors, as lacking the toughness required to earn the title Marine. The actions of the drill instructors, on the other hand, are excused as necessary to instill discipline. These misguided individuals conflate cruelty with tough training. What the commentators ignore is that nowhere else in the Corps would such mistreatment of Marines be tolerated.

If boot camp is the most formative period of a Marine’s training where we inculcate recruits with our core values, why would such conduct be tolerated at Parris Island? It destroys the spirit of our recruits, damages unit cohesion, and breeds a deep-seated mistrust of leadership.

It is time for all Marines — past, present, and future — to understand that the intentional violation of clear boot-camp training regulations does not represent good initiative by our drill instructors and it does not result in stronger, faster, tougher Marines. It simply perpetuates a cycle of abuse that has been long in the making at Parris Island. And for a service that prides itself on having higher standards, every instance of recruit abuse should be a source of shame for all of us.