Exhausted Navy Fleet Faces A Dilemma: How To Hit ‘Reset’ While Staying On Watch

7th Fleet, the U.S. Navy’s Pacific forward deployed naval force, has burned itself out; the cost of this burnout is … Continued 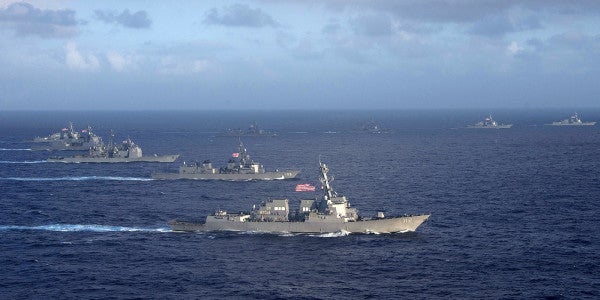 7th Fleet, the U.S. Navy’s Pacific forward deployed naval force, has burned itself out; the cost of this burnout is poor readiness, loss of ships and equipment, and most importantly, sailors’ lives. Since January, four significant ship mishaps have occurred in the 7th’s area of responsibility (AOR), including fatal collisions with merchant ships for the USS Fitzgerald and the USS John S. McCain. Those two incidents killed 17 sailors — significantly more than the number of U.S. service numbers lost in the Afghanistan war zone so far in 2017. This summer has been a watershed moment for the 7th Fleet family.

“I had made the assumption for many, many years that our forward deployed forces in Japan were the most proficient, well-trained, most experienced force we have because they were operating all the time,” Adm. Bill Moran, the vice chief of naval operations, said in a September 7 joint hearing before members of two House Armed Services subcommittees.

“It was the wrong assumption,” he added.

The 7th Fleet, homeported in Yokosuka, Japan, has an area of operation that spans more than 124 million square kilometers, stretching from the International Date Line to the India/Pakistan border. Having a continuous forward presence in the Pacific is a key deterrent to would-be aggressors such as North Korea and China.

15 years ago, when I spent three years of my naval career forward deployed to Japan, you could count on a couple of things to be true. First, 7th Fleet assets were always fully funded — and when you were forward deployed, you were blissfully removed from a lot of bureaucracy. But constant operations meant those resources became part of a “make it happen” mindset. You never really got to have a break and take advantage of all the training resources back in CONUS. This led to what senior guys would describe as a “shoot from the hip” mentality. It was like having a thoroughbred racehorse, but with no time to practice riding—you just went when the bell sounded.

Since then, stability has declined in the Pacific AOR — and in the Department of Defense budget. Now, we see an unrelenting demand for naval presence with the potential nuclear proliferation of North Korea. China is actively building artificial islands in the South China Sea, widening their territorial claims in an area rich with natural resources. To complicate matters, the Navy’s current fleet size is estimated to be 36 ships fewer than the service’s current operational plans require, according to the Heritage Foundation. A smaller complement of warships, coupled with an inability to actively train and perform preventive maintenance due to constant budget gaps, has worn the 7th Fleet down.

Many critics point to the 2011 Budget Control Act, which mandates the cost-chopping process known as “sequestration,” along with nine consecutive continuing resolutions as a death knell for U.S. force readiness. A continuing resolution (CR) provides stop gap funding for operations, personnel, and equipment but at the same levels as the previous fiscal year. It is a measure used when Congress and the President cannot agree–or when Congress takes too long– to provide a budget appropriation for the next fiscal year. The key downsides of a CR are no new programs can begin and no final decision has been made on the next year’s budget.

Without a funding increase — which seems likelier this year — training in even the most basic of tasks has become difficult. John Pendleton, the Government Accountability Office’s director of defense readiness issues, told the House Armed Services readiness panel that 8 of the Japan-based U.S. fleet’s 11 ships had expired certifications for seamanship.

“This represents more than a fivefold increase in the percentage of expired warfare certifications for these ships since our May 2015 report,” Pendleton said.

Think about that for a moment. Over 70% of the 7th Fleet was not certified to even properly drive the ship—a basic requirement to operate any vessel safely and effectively. Surface warfare officers will tell you driving a $1.6 billion dollar ship through extremely crowded navigation lanes is pretty difficult. Safe and effective operation takes regular training; it’s not like riding a bicycle. Most importantly, if a ship is not even certified in seamanship, how can one expect it to fight when it does eventually get to the required AOR?

The Navy has tasked Adm. Philip Davidson, commander of U.S. Fleet Forces Command, to perform a comprehensive review on how these recent incidents at sea have occurred and what can be done to mitigate them. Davidson’s team must address 7th Fleet’s operational tempo, as well as the conflict between operating and available maintenance time. The review team must also assume that Pentagon-funding gaps will continue in Congress, but correcting this problem will take more than money now. The review plan must come with built-in “reset” time, to provide opportunities for maintenance and to achieve basic crew qualifications and certifications.

This reset time will come at a price. Navy leadership must turn down missions in the near term and slow the 7th Fleet operational tempo until its sailors can get back on track. But we must remember that a larger problem with North Korea and China looms on the horizon. It is obvious 7th Fleet cannot continue as things are, or we could risk losing our deterrence option all together. If we want to maintain a formidable presence in the region, a comprehensive reset looks like the only option.