To Hell With Political Boogeymen

What’s more American than a good ole’ Abraham Lincoln thought on a citizen’s duty and responsibility in a republic. “Elections... 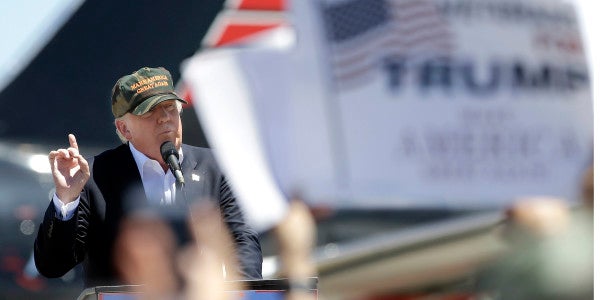 What’s more American than a good ole’ Abraham Lincoln thought on a citizen’s duty and responsibility in a republic.

“Elections belong to the people,” he wrote. “It’s their decision. If they decide to turn their back on the fire and burn their behinds, then they will just have to sit on their blisters.”

Damn, Abe, that’s, umm, fire! And something to consider in the aftermath of Trump’s first week as president.

I read Jack Mandaville’s “The Left Made It Easy for Me To Like Trump” at the veterans site Unapologetically American with a strange sort of awe. It takes a potent blend of cognitive dissonance, half-assed nihilism, and safety from the consequences to vote in a national election against one’s beliefs and the interests of their social class purely out of spite.

What the fuck, man?

In one breath, Mandaville argues that he hates when liberals condescend. Ahh, yes, the Patronizing Liberal, a political boogeyman as timeless as the Angry Conservative. Then in the next breath, he presents an essay about spiting “libtards,” lol, for like, caring too much. Maybe if the Democrats he encountered over the past year didn’t try so hard, then perhaps he would have voted with them, goes the subtext. Alas, they insisted on browbeating him with their reasoning and passion, and our intrepid hero wasn’t about to have that.

Hot tip from a stranger on the Internet: you don’t want to be condescended to? Maybe vote your own conscience instead of as a reaction against others’. I disagree mightily with my friends who voted for Trump because they believe he’ll be good for the country, but that’s their right as citizens and I’m proud of them for fulfilling their voting duty.

(And I will honor that duty by getting into Facebook arguments with them every day for the next four years.)

The killer line in Mandaville’s essay: “They stripped us of our dignity.” Slow your roll, Snowflake Mandela. In the wake of the election, there are people fearing for their safety and for that of their families. There are people fearing their homes or places of worship being tagged with swastikas. There are people fearing deportation. Those are far more tangible fears than hurt feelings. Let’s be honest, the voters of the victor aren’t going to be stripped of anything, and besides, to quote the philosopher-king Michael J. Fox, “One’s dignity may be assaulted, vandalized and cruelly mocked, but it can never be taken away unless it is surrendered.”

Blaming your vote on others isn’t just passive-aggressive, it’s an abdication.

(That is not an Abraham Lincoln quote.)

Mandaville provides a list of unconnected anecdotes as the bedrock for his decision. A friend getting tossed from a bar. A man getting spit at. That awful incident in Chicago with the mentally handicapped teen. (Which happened after the election, but I digress.) Does he mean to suggest that hyper-politicization brings out the worst in people, as well as the worst people? Oh, I see. Insightful. Let me try. Ku Klux Klan marchers in North Carolina. That white supremacist idiot who got punched in the face. Any joker who honestly believes that Clinton belongs to a Satanist cult. People so convinced that a pizza restaurant in D.C. is a front for a child smuggling ring, they drive hundreds of miles with an AR-15 to investigate. How am I doing?

Should I have only voted for Clinton out of reaction to crazy people? Of course not. They are crazy.

Should I have only voted for Clinton out of reaction to those crazy people? Of course not. They are crazy. I weighed the pros and cons of both candidates, considered those pros and cons in relation to my own ideals and worldview, and cast my vote accordingly. That’s what adults do. And despite the veneer of Mandaville’s argument, I suspect that’s what he did, too. Because anyone who writes “I’m really excited about Donald J. Trump being President of the United States of America,” voted that way for reasons that transcend spite. That would’ve made for a much more interesting article, I think, especially coming from someone with some of his expressed political views.

The Patronizing Liberal has been a straw man argument for years, and a useful one at that. Same goes for the Angry Conservative. And while these fallacies will endure, their usefulness is in question in the Age of Trump. Again, Trump voters, you all won. Your guy is the president. My tribe failed. The Lord of the Heel Spur is our nation’s commander-in-chief with a Republican-controlled Congress. Now, own it.

Whether an avid supporter, Redhat, or someone who held their nose on Election Day and pulled the red lever, you all are responsible for what happens these next four years. That’s how our republic works. Anything and everything that happens, whether a wall along the Mexican border, or a withdrawal from NATO, or everlasting world peace is because enough Americans voted Donald Trump our president. Nothing that happens going forward will be because of Hillary’s emails, or the Trans-Pacific Trade Partnership, or Obamacare, or whatever other boogeyman the looney-tune fringe will trot out to incite panic and rage. Being in charge, being in power? That’s the hard part. Ain’t no time or space for victimhood anymore, let alone for sore winners. Embrace it before it embraces you.

Even those of us who didn’t vote for Trump are responsible, going forward, and not just because we didn’t do enough to get our preferred candidate elected. We’re responsible because we’re citizens, and we’re all in this together. Being honest with how we voted and why, rather than blaming easy caricatures from the other side for that vote, accomplishes nothing. Like Lincoln wrote back in the day, it’s all our asses on the line.