Police brutality is an issue that’s bedeviled the country since formal police forces began to organize in the late 19th century, and America’s armed forces are no exception 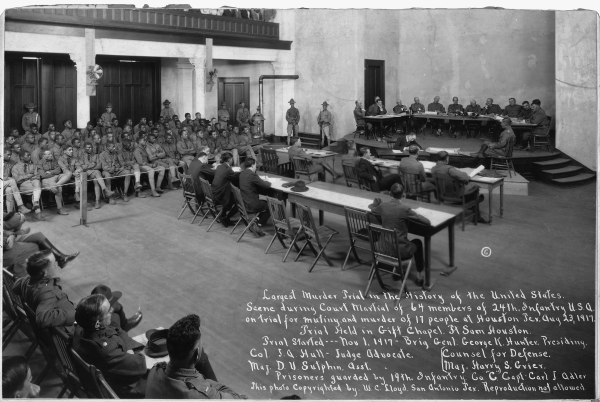 George Floyd’s death at the hands of Minneapolis police has touched off the most widespread series of street protests since 1968, and with good reason. Police brutality is an issue that’s bedeviled the country since formal police forces began to organize in the late 19th century. No part of American life has been untouched by it, and America’s armed forces are no exception.

Under the administration of President Donald Trump, the directive of “when the looting starts, the shooting starts” captures the military’s delicate role in the current crisis. Indeed, the president recently invoked Gen. Douglas MacArthur and Gen. George Patton’s aggressive reputations as a model for dealing with unruly protesters. But Bonus Army issues aside, dealing aggressively with demonstrators doesn’t address the root cause of the problem of police brutality: The issue of status in America.

The tension over status runs deep in American history, and not even the status enjoyed by the U.S. military through history has been spared it from it’s consequences.

In July of that year, Army Col. William Newman was frantically tying to have his unit’s deployment orders revoked. While the United States was ramping up for the coming war with Germany, Newman’s men were ordered to Houston to guard the construction of a new Army base, Camp Logan. In some ways, he was being asked to march his men, the legendary African-American soldiers of the 3rd Battalion, 24th Infantry Regiment of the Buffalo Soldiers, into the teeth of an opponent he was powerless to fight back against: the people of Houston, Texas.

“I had already had an unfortunate experience when I was in command of two companies of the 24th Infantry at Del Rio, Texas,” Newman later told an Army investigation into the riots, “When a colored soldier was killed by a Texas Ranger for no other reason than that he was a colored man; that it angered Texans to see colored men in the uniform of a soldier.”

Yet, in honor of the past service and sacrifices of African-American troops throughout U.S. history, Baker went ahead with the deployments. The 3rd Battalion of the 24th arrived in Houston on July 28th, 1917. Many men were decorated veterans of service in Cuba, the Philippines, and the Mexican Border. These men were tough, seasoned, professional soldiers. Despite the fact that many hailed from the South, they were secure in the belief that the status they achieved on the battlefield affirmed their proper place as equals in American society.

It was a noble decision with dire consequences.

Within hours of arriving in Texas, however, the men began experiencing the hell that was Houston under Jim Crow. As one African-American said of Houston to the NAACP, “Having a home in Houston is all right, but not when you never know when you leave it in the morning if you will really be able to get back to it at night.”

What followed was weeks of constant use of the N-word by residents and construction workers at Camp Logan. Worse still, the Houston police department began subjecting the soldiers, in uniform, to the same harassment the African-American residents of the city were forced to endure. The men’s status as soldiers meant nothing in Houston. Tension rose as steadily as the Texas heat, and Col. Newman went to great lengths to avoid conflict. Nearly all of the troops were disarmed and the battalion’s rifles were locked away.

But it was no use. On August 23rd, 1917, an African-American soldier named Alonso Edwards was arrested while defending a black woman being beaten by a Houston patrolman named Lee Sparks. When Cpl. Charles Baltimore confronted Sparks about the arrest, the patrolman pistol-whipped Baltimore and opened fire on him as the MP fled. Baltimore was captured, beaten, then arrested. Even after Baltimore was released, a rumor that a white mob was approaching sent the soldiers after their rifles and into town.

The ensuing gun battle with the Houston police department that night killed 17 people.

In the end, Texas’ racist status quo won the day: 41 African-American soldiers were sentenced to life in prison and 13 were summarily hanged. That was the price of maintaining Jim Crow laws in Texas. Police brutality and systematic racism was the spark that ignited the Houston riots of 1917, but the dry tinder was denial of the status the soldiers felt they had earned. And America, then as now, is all about the attainment and maintenance of status.

The uniform of a soldier holds a special place in a nation’s collective heart; in his push to militarize all of American society for the coming war, President Woodrow Wilson pushed this appreciation to heights not seen again until after 9/11. The American fighting man was not simply a soldier, but a holy warrior off to fight in a great crusade for freedom. The African-American soldiers of the 24th Infantry Regiment were proud to wear their country’s uniform. Their service was long and distinguished and they were deserving of the status it brought them. In a time when racism dominated even Northern locales, enjoying such an exalted status was no small thing.

The residents and police of Houston, however, saw their own status through the lens of Jim Crow. The uniform they loved and admired became a threat to their world when placed upon black skin. The Buffalo Soldiers’ storied service abroad made their presence even more galling. Maintenance of their perceived place in the world took precedence above all else, even over supporting the war effort.

As American cities continue to burn in protest, the riot of 1917 provides a lesson in both the power of the forces behind police brutality and the way forward. Not even the Buffalo soldiers, one of the most famous Army units of its day, could escape becoming victims of police brutality. The rage over denial of status that led the men of the 24th to riot is no less poignant than the rage driving today’s demonstrations. Yet the luster of the status afforded to them by their military service could not be extinguished by beatings, shootings, and epithets. African-American soldiers kept serving with distinction. In doing so, they bent the arc of history in their direction. The eventual desegregation of the U.S. military was a major step on the road to the Civil Rights movement.

Today, relatives of both the men of the 24th and the Houston police department are pushing Trump for posthumous pardons for those convicted soldiers from more than a century ago to give them back the very status they were denied. “The men did not have a fair trial,” the great-granddaughter of a Houston police officer said. “Both sides bear a responsibility.” The pardons have not been taken up, but in light of George Floyd’s murder, Trump would be wise to return the status they earned to them.