If the US really wants to win against China or Russia, it needs to start investing in the infantry

Never underestimate the importance of America's foundational and most critical military capability: the infantry. 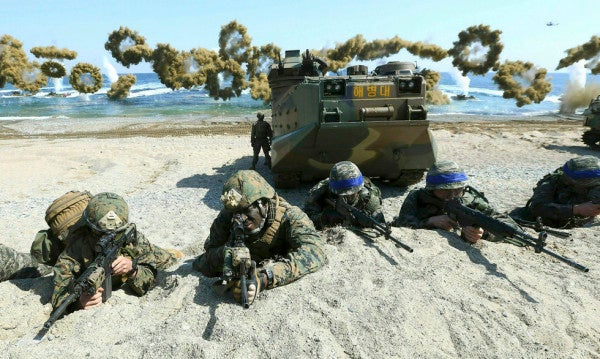 The 2018 U.S. National Defense Strategy (NDS) suggests our biggest national security threats come from “near-peer” rivals such as China and Russia. In order to adequately prepare the U.S. for a military conflict with one of these major global powers, the recently announced 2020 national budget prioritizes the rapid development of next-generation, high-technology initiatives in the nuclear, cyber, autonomous systems, and outer space arenas.

While these initiatives are important and worthwhile, they underestimate the importance of America's foundational and most critical military capability: the infantry.

The infantryman, or “grunt,” has borne the lion's share of the fight from classical to contemporary times. Although no infantryman in their right mind would go to war without the right support — including artillery, aviation, armor, combat engineers, and combat logistics — infantry units historically make up the foundation upon which more complex armed task forces are built.

As rivals like China continue to gain geopolitical influence and challenge U.S. hegemony, infantry units must be kept in center focus. Whether the next fight is a large-scale world war or a counterinsurgency, well-supported infantry units will be the ones who ultimately win the close fight by clearing out enemy forces, holding ground, and setting the conditions for long-term stability and governance.

Indeed, the infantry is unique in its dual mandate and ability to both cause, and subsequently conquer, chaos.

High-tech precision guided munitions provide significant combat support initially to weaken the enemy, but they cannot hold ground. Young soldiers, Marines, and special operations teams are the ones who conduct the key missions to secure contested battleground — often fighting in the streets among a terrified local population — with nothing but the weaponry on their bodies to survive.

While it is practical, wise, and necessary to keep our high-technology military capabilities on par with those of Russia and China, it is unlikely that the U.S. will engage in full-blown, unrestricted warfare with either of these powers. Indeed, the age of Dresden-like fire-bombing without consideration for the potential loss of civilian lives and other collateral damage seems to be mostly a thing of the past.

While future conflicts might start with cyber, they will likely end in proxy wars.

An enemy's first order of business might include eliminating U.S. computer networks, jamming radio frequencies, disabling navigation, and exploiting digital signatures. When proxy forces, insurgents, and mercenaries inevitably attack American troops, it will once again be the infantry that clears out enemy strongholds in contested areas where the lines between combatant and non-combatant are blurred. It will be the infantry that is left to operate on their last orders and follow their commander's intent to sort out the battlefield and secure a victory.

Given the infantry's indispensable role in defending our nation and winning our wars, we have fallen woefully behind in keeping its training ranges and other necessary accoutrements up-to-date. Fortunately, the speed and cost of equipping an infantryman is minuscule compared to that of the DoD's more high-tech initiatives. A single F-35A costs an estimated $89.2 million. By contrast, the Marine Corps recently contracted to purchase 15,000 M27 Heckler and Koch rifles — enough for nearly every infantry Marine — for $1,300 a copy, totaling $29.4 million.

Such a policy could start with an expansion of the former Secretary of Defense's Close Combat Lethality Task Force (CCLTF) to increase and sustain the infantry squad's capabilities. Rapidly identifying, testing, and fielding the newest weaponry, munitions, technologies, training capabilities, and personal protective equipment of the U.S. infantry will save lives and build a strong foundation for the entire force.

We should also invest in the leadership and cohesion of small infantry units and quantifiably measure these traits across the force. History is replete with examples of infantry units haphazardly thrown together that undergo disproportionate casualties and suffer a steep learning curve in combat. In 1943, the 34th Infantry Division's failure to secure the Kasserine Pass — nicknamed “America's most humiliating defeat' in WWII — was a direct result of unprepared, poorly trained, and ill-equipped ground troops.

Victory in combat — as well as a successful transition to an enduring peaceful future — remains possible only with the most lethal, disciplined, physically fit, well-equipped, well-supported, well-led, and well-trained infantry in the world. As Major Mark A. Smith, a Special Forces soldier, Vietnam prisoner of war, and recipient of the Distinguished Service Cross medal, once said: “Anyone who thinks that future battlefields will not contain Infantrymen knows nothing about war.”

Matthew S. Reid is a Colonel in the U.S. Marine Corps and a current Military Fellow at the Council on Foreign Relations (CFR). Prior, he served as an infantry officer on two tours in both Afghanistan and Iraq, and on three Marine Expeditionary Units.

The opinions expressed are those of the author and do not represent the Marine Corps or the United States Government.