The Marine Corps unveiled its new recruiting campaign March 17 with a blitz of nationwide television commercials, each one anchored... 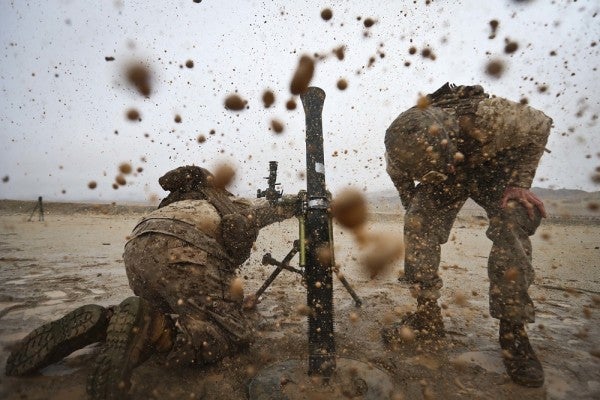 The Marine Corps unveiled its new recruiting campaign March 17 with a blitz of nationwide television commercials, each one anchored by the same central theme: Marines win battles. Called “Battles Won,” the new campaign extols the history and virtues of the Corps.

But there’s one message that’s conspicuously missing from the promotional campaign, and for those who remember the days when their drill instructors made them repeatedly shout “Pray for war!” like a ditty, it’s a surprising one. The Corps isn’t advertising war, anymore.

In fact, it’s not really advertising combat, not like it has in the past. In 2012, the Marine Corps released “Toward the sounds of chaos,” which shows Marines charging across flat plateaus and assaulting beaches, as they prepare to take on some ominous threat with just about every asset and tool in the service’s arsenal. In 2015, the Corps’ ad called “The Wall” opened with shots of a mud wall — like those commonly seen in Afghanistan — that eventually explodes outward as dozens of Marines pour through the breach. Each recruiting ad had a clear, pointed message: Join the Corps, if you want a fight. Join the Corps if you want to see combat. Join the Corps if you want war.

This doesn’t mean Marines aren’t still in the fight, that can’t be questioned. Right now they’re serving in Iraq, outside of Mosul, near Raqqa, Syria, and across the globe aboard ships, on overseas bases, and standing guard at embassies.

This new recruitment message is promoting a fight, but not war. In the commercials, everything is framed as a struggle, and each video ticks off a different accomplishment: becoming a Marine, participating in humanitarian work, becoming a better citizen. Each one a distinctly different victory.

It makes sense. Most prospective recruits are too young to remember Sept. 11, but they grew up during America’s longest period of sustained conflict. They were in middle and high school from the surge to the withdrawal in Iraq and Afghanistan. Maybe they’re not looking for a war; they’re probably more tired of it than most of us who served in one. That doesn’t mean the 19 and 20-year-olds of today aren’t up for a fight, and that’s what the Corps seems to be conveying with its new campaign.

When I enlisted, I was sold on and eagerly bought into the prospect of war: Sign up, get deployed, live a little, and come home with stories and some experience. That’s changed. War used to be selling the point. Now it’s enough just to serve a higher calling.