A year has passed since the Marines United social media scandal broke in the news, and despite the very real... 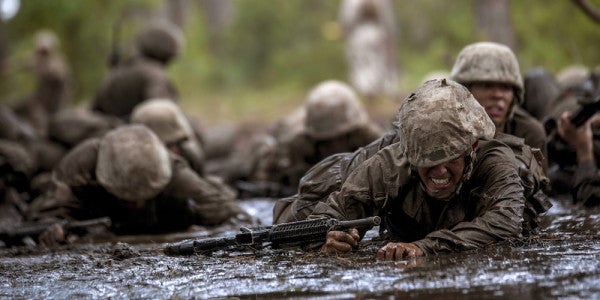 A year has passed since the Marines United social media scandal broke in the news, and despite the very real damage to Marine Corps’ reputation, few substantive changes have been made to reform the culture. As smart, fit young women consider their options for military service they will go where their talents are appreciated and valued. The Marine Corps is the only service that stands to lose. With the credibility of the service and its leaders at stake, there has never been a more pressing need for the organization to change.

And make no mistake — cultural change is entirely possible but will require absolute persistence and at least four deliberate actions by senior leaders.

First, the Commandant of the Marine Corps must ensure recruit training policies and regulations require recruit training battalion commanders to train men and women together on events like hikes and physical fitness sessions. Without formal changes to training doctrine it’s quite probable that because of their own misperceptions about the abilities of women, future commanders at Parris Island will simply opt not to have male and female recruits conduct joint training. After all, in 2014-2015 when I was the commanding officer of the Fourth Recruit Training Battalion there, I was shocked when my drill instructors told me that in the late 1990s male and female recruits routinely hiked and conducted physical fitness training events together at Parris Island.

The Rise And Fall (And Rise) Of ‘Marines United’

Predictably, because it was not required by policy, the integration of training events at Parris Island was later phased out by less progressive senior leaders who held more traditional views about the roles and abilities of women. The return to absolute segregation for female recruits resulted not only in the resurgence of negative stereotypes about women, but also the persistent belief that bootcamp is easier for them. As Erin Kirk-Cuomo, co-founder of the advocacy group Not In My Marine Corps, put it, the failure to integrate bootcamp creates a gender divide from the very start of a Marine’s career, and “engrains this mentality and behavior into the psyche and muscle memory of the Corps as much as drinking water, taking Motrin, and keeping your socks clean and dry.”

Second, the senior leaders must do more to increase the population of women Marines. According to a recent study by the U.S. Equal Employment Opportunity Commission, one of the most important risk factors to determine whether women will be harassed and discriminated against in the workplace is whether they work in predominantly male organizations. The Marine Corps is no different. Although it is the smallest service with the fewest women—comprising just 9% of the Marines compared to just under 19% for the Air Force and 18% for the Navy—the Marine Corps also has the highest sexual assault, harassment, and retaliation rates of all of the services. It would stand to reason then, that one way to turn the table on sexism and sexual misconduct in the Marines would be to boost the number of women across all ranks and occupational specialties.

The size of the female Marine population has changed little over the past 10 years. Because the Marine Corps has not made plans to open up a female training battalion at the recruit depot in San Diego, Parris Island continues to be the only place where female Marines can be made. And until structural changes are made to the recruit training environment, growth of the female Marine population much past the Commandant’s stated goal of 10% will be impossible due to the artificial bottleneck presented by limited bed spaces in the smaller female recruit training battalion.

Report: Nude Photos From ‘Marines United’ Are Up For Sale On The Dark Web

Forging A Way Forward: Accountability In the Corps After The ‘Marines United’ Scandal

Increasing the population of women Marines would also require changes to recruiting regulations, and yet in a recent interview, General Glenn Walters, the assistant commandant of the Marine Corps, equated swelling the female population with “good fortune.” He further stated that if the number of women applicants was to increase substantially, senior leaders would consider allowing women to train at both Parris Island and San Diego. Because women can only train at Parris Island, every year half of all new Marines graduate from bootcamp without ever seeing women in training. Unless women are allowed to train on both coasts, the sexist and misogynistic attitudes expressed by many participants on the various Marines United social media sites will be nearly impossible to stamp out.

Growing the population of women in the Marine Corps is not a chicken and egg scenario, nor should it be considered a stroke of luck. Simply put, the Marine Corps will never be able to really increase the population of female Marines without expanding current training facilities and increasing the number of women in the recruiting pipeline, both of which require deliberate planning and execution now if the Marines are to change the culture in the forseeable future.

Senior leaders must also eliminate obstacles that contribute to negative perceptions and stereotypes about women. According to diversity and inclusion experts from the Kaleel Jamison Consulting Group, “Because barriers to inclusion tend to be invisible to those already succeeding in an organization, the most successful people often believe their organizations to be farther along the continuum toward inclusiveness than they really are.” It is time for the leadership to acknowledge that real barriers to equal treatment exist for female Marines, and actually do something about it.

Contrary to popular belief, female recruits don’t experience a higher level of attrition in bootcamp simply because they are women. The fact is that women are frequently discharged from training because of poor screening and sales practices by the predominantly male recruiting force and because they generally lack a realistic view of what to mentally and physically expect when they get to bootcamp. These women are simply ill prepared to adapt to the fast-paced and highly stressful bootcamp environment, which often results in a crisis of confidence, poor performance, and depression. Segregated bootcamp and poor recruiting practices should be viewed as obstacles because they result in a lack of trust in the abilities of women and the belief that double standards for performance make it easier for women to become Marines.

Finally, senior leaders must establish key performance indicators to better hold commanders accountable for lowering the rates of sexual misconduct, harassment, and retaliation in their units. Commanders should be required to include their unit sexual harassment, assault, and retaliation stats on their annual performance evaluations. Since a prevalence of sexual misconduct in a given unit is a sign that a commander is failing to ensure the safety and accountability of their Marines, such commanders should not be rewarded with future promotion, school, and command opportunities. Until they are held accountable, little will change.

As the Marines United photo sharing scandal demonstrated in 2017, a current of sexism permeates almost all ranks of the Marine Corps. In the past 12 months, the Marine Corps has done little to level the playing field for men and women, and the service is running out of time. Nothing short of a cultural revolution will suffice if the Marine Corps is to successfully leverage the talents and abilities of America’s 51% — women — and remain operationally viable in the future. The clock is ticking.