HR McMaster Was Our Best Shot At Making Trump Presidential, And He’s Failing

I’m not a distinguished veteran. I didn’t always do my best. My own service was short and uneventful. When I... 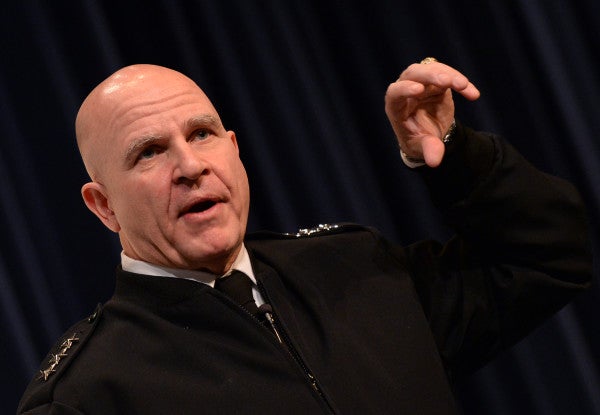 I’m not a distinguished veteran. I didn’t always do my best. My own service was short and uneventful. When I went to Iraq, it was as a contractor in debt. But I know better than to tell Russia’s foreign minister and ambassador to the United States top-secret, sensitive compartmented information, first obtained by a clandestine U.S. partner, from a code-named program regarding a specific ISIS threat against the West.

I know better than to tell them this in the Oval Office, without U.S. reporters and photographers present, where the president agreed to receive the Russians at the request of Vladimir Putin, the day after the president fired his FBI director and told an NBC interviewer he was thinking about the FBI director’s Trump-Russia investigation while doing the firing. I know better than to trot out presidential aides to make carefully worded denials of irresponsibility, only to blow up their spots by tweeting childish, after-the-fact rationales for blabbing details that could unmask sources and methods to Russia’s leadership at 7:03 in the morning.

I know better than the president of the United States. The chances are pretty good that you do, too.

In these times, what is a conscientious military service member to do? I don’t know how to answer that question right now, except to say you probably shouldn’t do what Lt. Gen. H.R. McMaster, President Donald Trump’s national security adviser, did last night.

A little background on McMaster is in order. An armor officer who received a Silver Star for the Battle of Easting 73 in the Gulf War, McMaster also earned a reputation as a brilliant counterinsurgency mind, pacifying the restive Sunni Iraqi city of Tal Afar with his 3rd Armored Cavalry Regiment in 2005.

But McMaster’s real claim to fame — the thing that vaulted him to celebrity status among the flag officers he’d soon join — was his Ph.D. dissertation, which was published as a book in 1997. Titled “Dereliction of Duty: Lyndon Johnson, Robert McNamara, The Joint Chiefs of Staff, and the Lies that Led to Vietnam,” it essentially prosecuted America’s military brass for not calling the president and defense secretary on their bullshit in the Vietnam era.

“The war in Vietnam was not lost in the field, nor was it lost on the front pages of the New York Times or the college campuses. It was lost in Washington, D.C.,” McMaster wrote. The generals squandered their chances to tell President Johnson that the only choices in Vietnam, from the get-go, were to go big or go home. As a result, he wrote, the military found itself in a decade-long morass, riding along with the civilian politicians’ “arrogance, weakness, lying in pursuit of self-interest abdication of responsibility to the American people.”

Now, the three-star McMaster is reduced to standing in front of the White House press pool and delivering carefully worded messages of support for an arrogant, weak, self-preserving, prevaricating president. Here is what McMaster said, in its entirety, last night to push back against Trump’s loose lips with the Russians, before he turned and walked away from reporters’ questions:

The story that came out tonight, as reported, is false. The president and foreign minister reviewed a range of common threats to our two countries including threats to civil aviation. At no time … were intelligence sources or methods discussed. And the president did not disclose any military operations that were not publicly known … I was in the room, it didn’t happen.

As multiple sources have pointed out, this sounds like painstaking a mashup of Trump rants and legalese. McMaster did not deny that Trump divulged very classified information — only that no “intelligence sources or methods” were discussed. But all of the independently reported stories on Trump’s senior moment — a moment, mind you, that would earn any of us a long trip to Fort Leavenworth — made this clear: “White House officials emphasized that Trump had not discussed specific intelligence sources and methods, rather than addressing whether he had disclosed information drawn from sensitive sources,” the Washington Post reported.

White House reaction cycle
1 – It never happened
2 – POTUS tweet
3 – It happened; NBD
4 – Nobody cares but you
5 – No more questions on this

And brother, what sensitive information: Intel on ISIS terror plans, provided to the United States by a partner nation in an info-sharing program so sensitive that not even America’s closest allies knew about it, according to the Post:

The partner had not given the United States permission to share the material with Russia, and officials said Trump’s decision to do so endangers cooperation from an ally that has access to the inner workings of the Islamic State. After Trump’s meeting, senior White House officials took steps to contain the damage, placing calls to the CIA and the National Security Agency.

“This is code-word information,” said a U.S. official familiar with the matter, using terminology that refers to one of the highest classification levels used by American spy agencies. Trump “revealed more information to the Russian ambassador than we have shared with our own allies.”

Background sources also told the Post — and a bunch of other serious news outlets — that it wouldn’t be hard for the Russians to figure out sources and methods from the bit of intel that Trump dribbled to them.

Every depper who’s filled out an SF-86 or nonrate who’s sat through a boot-camp security briefing understands that what the president told Russian Foreign Minister Sergei Lavrov and Russian ambassador Sergey Kislyak was wrong — and not just wrong, but the kind of wrong that calls into question his fitness to lead 321 million people to a fate other than privation, misery, and stupidity.

All Americans — whether they’re service members or civilians — deserve a commander-in-chief who isn’t this stupid or careless, who hasn’t committed every dumb violation of opsec and infosec that he (occasionally credibly) accused his election opponent of committing. Maybe he thinks he can do all this because screw it, some Clintons and Bushes and Obamas do it, right? That’s incorrect. It’s the sort of reasoning that a mom smacks a preschooler across the ass for. It’s the kind of excuse that NCOs PT out of a thoughtless military recruit.

This is not a vast left-wing conspiracy. This is not “fake news” to score political hits. I’ve written critically about hundreds of politicians across the ideological spectrum over the years. This is different. Here is the deeply conservative Republican chairman of the Senate Committee on Foreign Relations:

Republican Sen. Bob Corker says the White House is “in a downward spiral” and a lack of discipline is creating chaos https://t.co/yM97htbYbV pic.twitter.com/eEuqwNMwfF

Here is part of a long, deep, considered post by the mix of conservatives, centrists, and liberals at Lawfare:

It’s very hard to argue that carelessly giving away highly sensitive material to an adversary foreign power constitutes a faithful execution of the office of President…Trump’s alleged screw-up with the Russians reveals yet again what we have learned many times in the last four months: The successful operation of our government assumes a minimally competent Chief Executive that we now lack.

Our president is reckless and careless. And McMaster — the one guy in this administration who literally wrote the book on how to tell blindered presidents to see the light — has failed to practice what he wrote. We’re in very uncharted territory, and frankly, I don’t know how we get back on course.