Dear U.S. military planners, After eight years of both Active Duty and National Guard service, I will be hanging up... 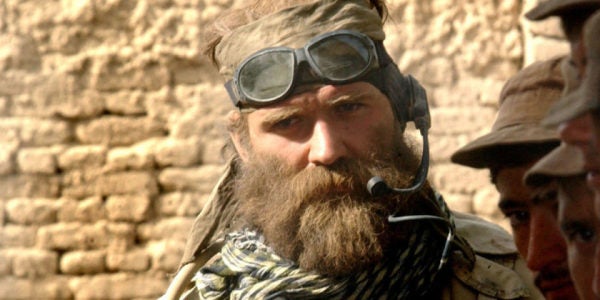 After eight years of both Active Duty and National Guard service, I will be hanging up my uniform permanently this December. And what would be my driving reason behind forgoing another romp with the mighty U.S. Air Force? That would be my beard.

Replace the word “tattoo” with “beard,” and you experience my current reality. I have grown up in a society where beards are not only relatively commonplace but even a sign of one’s masculinity and virility. I must admit that a good portion of my self-esteem is tied up in those facial follicles. Yet here I am, stationed in a non-chemically threatened environment, shaving my face on the daily, and regretting never purchasing stock in Gillette.

Related: Will Prince Harry Have To Decide Between His Uniform And Beard? »

It's not an impossible issue to address. Indeed, the Navy on Tuesday announced looser hairstyle regulations for female sailors, rules that now allow for dos that include locks, ponytails, and other longer styles. Style options for females are now expanded exponentially, thanks to the changes pieced together by Chief of Naval Operations Adm. John Richardson and Chief of Naval Personnel Vice Adm. Bob Burke, in response to input from sailors.

This isn't a matter of comfort, but strategy. Consider that the Air Force trained approximately 4,700 non-prior-service airmen in 2017. Estimates on total initial training cost range anywhere from about $30,000 to $75,000 in training; throw in a Top Secret/Secret Compartmentalized Information (TS/SCI) clearance and you can add another $3,000 to $15,000 in investigative fees to that total. In my case, for instance, the Air Force invested between $33,000 and $90,000 into my initial entry in the U.S. armed forces; this doesn't even include all the money the Air Force dumped into my initial on-the-job training and travel funds for any temporary duty assignments.

Counterpoint: The Army Needs To Grow A Pair Already And Say No To Beards »

Either way, it’s crystal clear: Training non-prior service Airmen is expensive and a strain on resources. According to the fiscal 2018 budget request, the Air Force would like to add roughly 2,600 airmen this year, bringing the active-force total up to 325,100. Well, you could make that 2,601 if you relax those damn beard requirements.

Why are we continuing to do this to our male warfighters? In addition to medical exemptions, the military is now allowing beards for religious preferences. From Sikhs to heathens, the military has already created accommodations for the bearded. Why not just open the regs to all? Allow soldiers to grow a beard on the condition that it be trimmed, unobtrusive, and well-kept. Beards must not impact the proper use of any military equipment, such as a gas mask.

Related: A Soldier Just Got Permission To Rock A Beard Because He’s A Metal Heathen »

Look, a quick Google search produced multiple petitions to allow beards in the military, with tens of thousands of signatures; this is not an uncommon request from U.S. service members. It's time to free the beard, for all of us, for all time.

Bryant Bartlett is a current member of the Air National Guard and design student in scenic Washington state. After several years as an active-duty airman, he previously worked for Amazon.